The mid-term visual effects of Transmen FTMs on "T" Testosterone 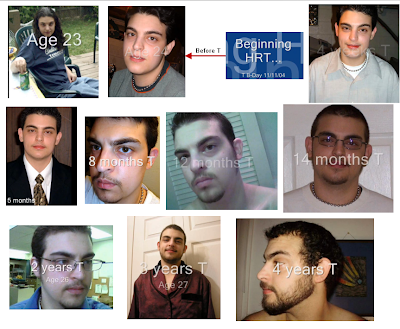 I'm going to begin making posts that document transmen on "T" over 3 plus years, illustrating the visual effects "T" is having on their physical being. So before the young transmen or wanna-be transmen pipe in that this is only one example and doesn't prove anything, this one example is only the first example, there will be plenty more going forward. And before some queer or trans type whines that the point of being a transman is to look like a real man, those females who have fallen into the trans trend seek transition to appear andro-pretty boyish like their favorite anime character or their favorite teen male idols, not because they desire to look like the balding/bald man with a paunch, that they will become in a matter of years.