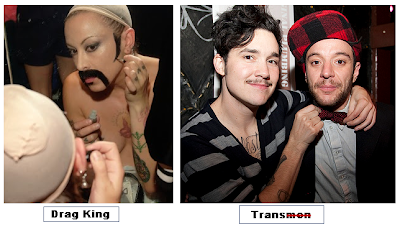 I've had a handful of questions in the form of comments which recently asked my position on transmen as drag kings. If you aren't familiar, drag kings are the equivalent of the drag queens we all know, only instead of males performing "woman", drag kings are females campishly performing "male". I place both "woman" and "male" in quotations because what is being performed by the natural bio male/female drag is an exaggerated caricature of "woman" and "man" based on stereotypical notions of woman/man.

That out of the way, I place any transman  who has had any kind of masculinizing cosmetic surgery and has/is injecting testosterone i.e. is no longer naturally female bodied by choice, in the same place as I place those same transmen who gate crash women's spaces. Simply put, transmen should be excluded as drag king performers and excluded from drag king contests. The fact that many transmen do get involved in drag kinging after chemical/cosmetic surgical help, that many insist they be allowed to perform as drag kings utilizing their female biology when it suits them, is an incredible insult and a slap in the face to the art of performance and to every woman on the planet.

It is one thing to make a mockery of yourself as a woman, it is another altogether to use that mockery as both a battering ram and an edge to gain entrance into our women specific spaces and over women specific contests/shows/performances.