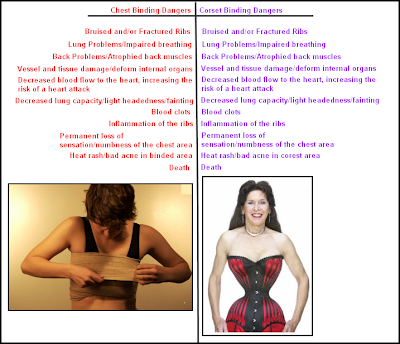 I made mention in my last post that the millions of negative messages looming both large and subliminally impact greatly each and every female from cradle to grave, negative misogynistic messages, many that have been with us so long we believe them to be "natural"/"normal". Like minute bits of dirt left unwashed from our skin, they sink deeper into our pores until one day they eventually break out into some form of puss filled sore or pimple or worse, a life threatening cancer. Man may have disturbed the ground that created the dust, but far too often it is women who fan the dirt from woman to woman to woman adding to the filth of women's lives.


The corset was just such a fetid invention, an invention crudely made, but one that would give females an hour glass shape, a male approved shape that signified an ultra (hyper) femininity as well as an upper class status, although later on all classes of females wore some version of the corset. The tighter a corset was worn, the more the figure would appear like the ideal hour glass, and the more females would gain positive attention from both men and women. But the tighter the corset was worn, the greater the health problems suffered by women; from light headedness to out right fainting spells, difficulty breathing, various issues with internal organs being smashed, broken ribs, some resulting in the puncturing of lungs which resulted in death. As (male) doctors began seeing more and more cases of women suffering from the assorted corset issues, (male) doctors told women not to lace the corset so tightly, some even demanded women stop wearing them altogether. But due to the pressure and expectations women received from each other, corset wearing continued until its style eventually went out of popular fashion, not because of its long history of proven dangers.

Breast binding is a more recent pustule risen out of the same misogynistic filth that germinated the corset. Binding is done in order to smash down the breast for the purpose of flattening or smoothing the breast for a more male appearance while clothed. Like the corset, the tighter one "binds" the more likely one is to suffer serious damages from regular wear. Damages such as shortened breath, potential heart attacks, damaged muscles and bones, chest numbness etc. Also like the corset it is primarily women who bind and women who pressure other females into binding. Since "passing" as a male is the ultimate goal of binding, in female trans communities both online and real-time, there is a great deal of pressure women and transmen put on other females who do not bind. There has become a very warped "right of passage" that takes place whenever a female goes from binding to having had her breast surgically hacked off, and that is the "binder give away". This is when transmen give away the binders they no longer need to the less fortunate who haven't a proper binder of their own, thereby adding to the pressure to bind which creates the pressure of those already binding to cross the "binder give away" right of passage into manhood. Unlike the corset, this dangerous article of female "fashion" has yet to reach its peak.