Going forward, next step TJ Jourian...Some basic background info first shall we? From a 2005 interview...
"When T.J. Jourian first came to the U.S. from Cyprus in 1999, his name was Tamar, and the gender box on his passport said he was female. That classification had always felt arbitrary to him, but it wasn’t until he started college at Michigan State University that Jourian began exploring his gender identity in earnest"...." So when emails about a new documentary about transgender students began circulating on queer and trans listservs, Jourian, now a graduate student at Michigan State, signed up. When asked when he decided he was trans he says: "It wasn’t until the fall of 2001. At the time I identified as a lesbian and I went to a training to learn about what it meant to be a lesbian and be allied to the transgender community. I was listening to other peoples’ stories, especially about their childhood, it was like a light bulb went on, and I thought, “Wow, this so totally makes sense now.” When asked about taking "T" he responds:  "I can’t take T right now, but I wish I could. Once I graduate and get my master’s degree, I have to return to Cyprus for two years as a part of visa regulations. During my time in Cyprus I’m expected to be a woman, preferably a straight woman, so to start T would jeopardize that process"... This reads to me like not only is he not suffering from any real body/gender dysphoria, because clearly this is something he can turn on and off like a light switch, which begs to differ from all the other trans stories that claim their lives were/are dependant on transition, someones lying. TJ also indicates he can turn his "lesbian" sexuality right back to that of "straight" with just as much ease, sounds like TJ is nothing more than a cameleon who camouflages himself when it suit him best.

TJ goes on in this 2005 interview fully embracing anti-essentialism and postmodernism's bastard child queer theory..."I think that’s one of the beauties of the FTM community. We can take these words that we hear on an everyday basis and reinvent them. I can decide I don’t like the traditional way that males bond. I don’t like this grunting, this punching each other on the arm thing. I want to be able to hug my brother and feel good about it and feel masculine about it. Masculinity is not about being this perceptive caveman. To me, masculinity is very personal, very fluid. It’s not a matter of “this is how men act,” and “this is how men feel,” but I, as a masculine person, I as a male person, feel this way. Society can’t decide what those words mean anymore. Individuals need to forge new language". TJ clearly (like queer theory) contradicts himself, he claims language needs to be "reinvented" then says we need a "new language"?? What he miserably (like queer theory) fails to comprehend is that there is no need for either. We can change the word car to apple, has the car then been reinvented? We can change the word car to xyz, does either of those changes alter the car's colour, the car's engine, how fast the car drives? No, it changes absolutely nothing! Changing or draining words of meaning, doesnt lead to revolutionary change, it only leads to confusion. Expanding confining measning that surround words, now thats revolutionary!

Continuing, the interviewer asks TJ: "As you look ahead to the next ten years of your life, do you anticipate living your life as a man or as an FTM transgender person"? TJ's answer: "I will always definitely be an FTM trans person, no matter how far into my transition I’ll be. The trans identity part is very important to me because it reminds folks of where I’ve come from and my roots are very important to me. I want to acknowledge the fact that being raised and socialized in this world as a female has made a considerable impact on me as a person". More on this later.

In the summer of 2008 TJ began working at the University of Vermont...see below:

It was TJ's job to implement safety procedures so that things like this didnt happen again at Vermont University while on his watch. See below: 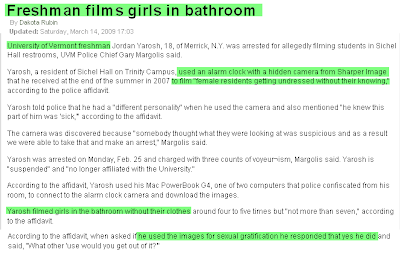 And what brilliant idea did TJ come up with to keep young women of VU safe? See below: 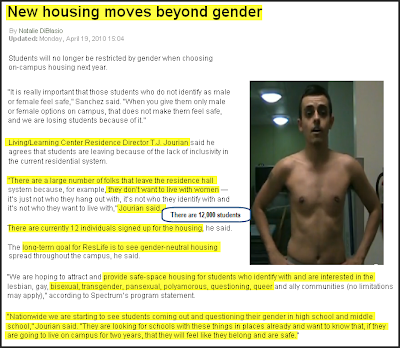 "Moving beyond gender", I'm afraid I don't see what this has to do with residential safety nor do I see why implementing a change that affects 12,000 for the 12 or so that signed up is really useful or a good use of tuition funds/donations. This clearly is a trans MALE person in a position of power that impacts thousands on campus who has used their post to implement policies that benifit only a handful of trans minded individuals. Funny, I cant say in the recorded history of lesbianism, even where thousands of lesbians were affected, has anyone ever done us such a favour. Let alone a favour at the expense of young college women who already face a 1 in 4 chance of being raped while at university. Call me crazy but if suddenly I turned into a man that was in a position of power, my every course of action would be to implement policies that work toward changing (at least on campus) the rape culture women live in. But you would have to like/love women to do that, and any woman who despises women on the pathological scale that trans(men) do, its obviously asking a bit much of them isnt it?

Earlier this year Nora Spencer hired TJ Jourian as the Program Coordinator for the Office of LGBTQI Life. What is TJ's educational background that qualified him for this position? A BA in General Management and an MA in Student Affairs Admin, oh wait and for less than a year he was an assistant for an LBGT Resource Center! I wager it was the trans/male status that clinched the position, what about you? The LGBTQI office at Vanderbilt now has zero lesbian representation.

Funny though, with job in hand TJ has dropped the "trans" status from his identification, despite claiming umm what was that again? Oh yes, claiming and I quote: "I will always definitely be an FTM trans person, no matter how far into my transition I’ll be. The trans identity part is very important to me". Lets take a quick look at TJ Jourian's short evolution from lesbian (when it suits him), transmale (when it suits him) and now male (but you'll see, even that is when it suits him). I dont have any pictures from his straight female cover he uses when he goes home, sorry. Oh wait, this picture just in from a private emailer, TJ when he was last home, including lovely purse. 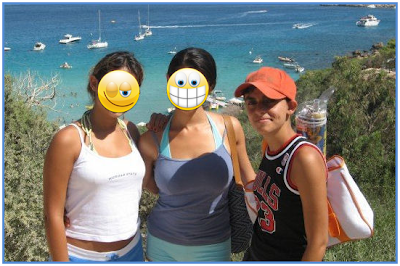 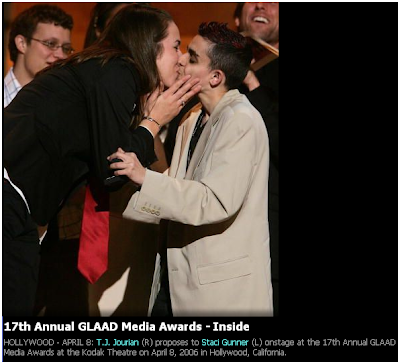 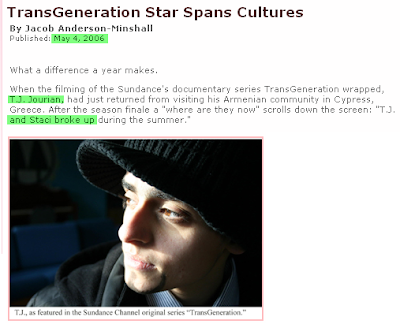 The lesbian break up and transman phase... 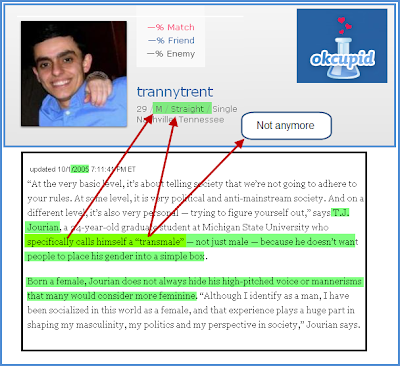 Now the much higher paying phase and I quote "STRAIGHT MAN"! Oh but wait, will return to trans status for extra cash. See below: 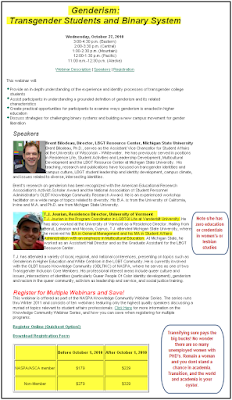 I do not see how a "straight man" can possibly understand or effectively do a job that has absolutely nothing to do with him. But straight man TJ got that job because a straight (queer) woman (nora spencer) hired him! Together they back up each others queer BS, together they strengthen the "queering" blueprint and together they are hurting the hundreds of gays and lesbians at Vanderbilt alone who truly need gay and lesbian resources.