Information regarding this post has been repeatedly brought to my attention through a series of comments in the last month or so. This subject is pertinent to my last few post regarding bringing attention to jobs for women/lesbians and the "queer" and trans/male(Maletf/ftMale) efforts to co-op and/or "queer" Women's Studies in universities across the globe and my efforts to see that it does not continue.

Vanderbilt University's Nora Spencer recently hired TJ Jourian, a once proud self proclaimed trans(man) (whom after receiving passing privilege from "T" has now dropped the trans altogether) as the Program Coordinator for the Office of LGBTQI Life, a post vacated (for reasons unknown) by a lesbian. You're probably thinking, so what's wrong with this picture dirt? Well, I'm going to show you step by step exactly whats wrong with this picture and at the same time illustrate how what has happened at Vanderbilt and similar places is being utilized as a blueprint for colleges and universities across the globe.

The problem here begins with Nora Spencer, or rather Nora Spencer's "queer" leanings. What do we know about "queer" Nora Spencer? We know that in 2008 when she was housed at the University of Florida she supported the Gainesville Transgender ordinance that opened up women's public bathrooms, locker rooms, shower room, changing rooms and any other private female area for anyone IDing as transgender. See here: 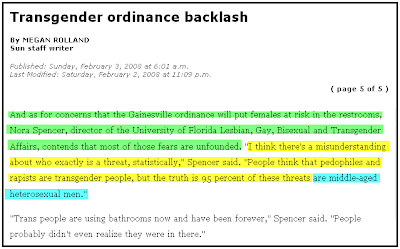 Nora herself claims here that 95% of pedophiles and rapists are straight middle-aged men, yet fails to state (or leaves conveniently out) that 95 plus percent of trans(women) are (white) "middle-aged heterosexual men"! Her words, not mine.

Continuing, Nora self identifies as "queer" and believes that "sexual orientation" and "gender" are not only "fluid" BUT "constructed" (how anti-essentialist of her) and she's come to this conclusion based not on a shred of empirical data but solely on the fact that she has "taken an interest in queer theory" (theory being the operative word) as well as taken a "ton of courses in it. Nora states that ideally she would like the center to become a "queer cultural space". And if you are a gay and especially lesbian you know exactly what that means, the exclusion and erasure of you and issues pertinent to you! See below: 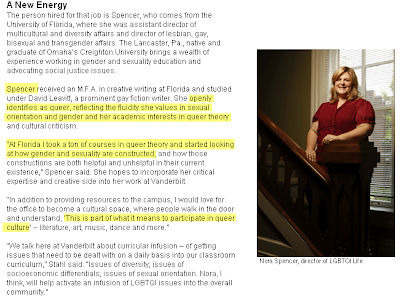 A year after "fluid-queer" Nora began her position at the GLBT center, she was also (to much dismay) appointed the directer of the Women's center and several personal were fired the same day. Also note the change of name at the GLBT center to that of LGBTQI Life center. Nothing like the continued systematic dilution of gays and lesbians to ensure our erasure from hetero-patriarchy..ermmm....I mean "queerdom". See below... 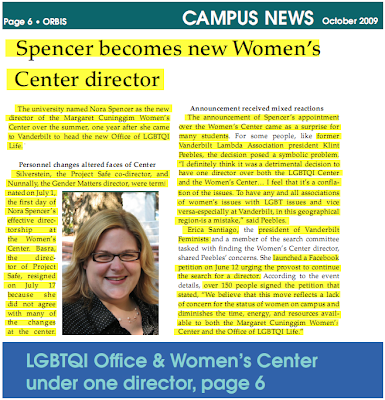 As this has become quite lengthy I will have to do this in two parts. Will try to finish later/tomorrow for sure, so tune in to more queer/trans truths then.