I begin this post with the assumption that those reading are well versed or at least familiar with Michfest and her nemesis Camp Trans. This post will deal with the threats of male violence and male violence perpetrated by trans(women) and trans(men) on Michfest goers as well as Camp Trans members at this summers events.

I'm going to start out with some highlighted screencaps by a group of Camp Trans trans(women) followed by several accounts from "queer women", closed by a four part video made by a trans(woman).

This first screencap can be read in full here: "Let the Trans Women Speak!": A Response to Camp Trans 2010 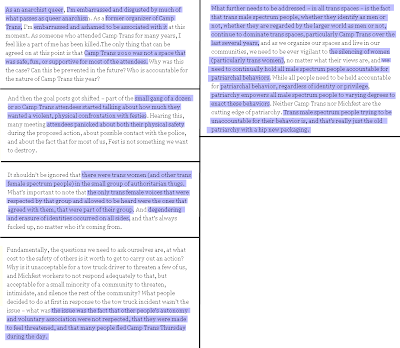 The full text for this screencap can be read here: Camp Trans and the Spirit of Community, by anarchafemme 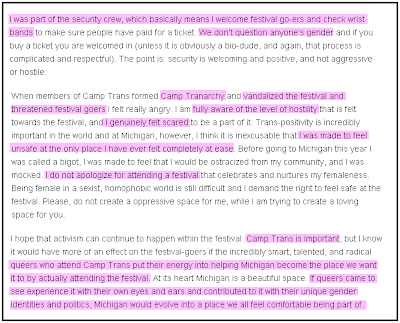 Make sure to read this!

Full text here: A Statement on Accusations Made Around Camp Trans 2010

This next screencap was written on a flyer that trans(men) and their apologists were mass distributing to women at Michfest.