Gay Transmen and the "right" to be in Gay Male Spaces 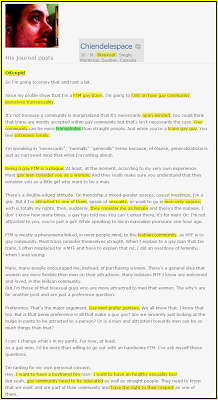 This trans attitude is the same attitude lesbians have received from (bi) straight females since the B attached itself to the gay and lesbian movement. It is a privileged attitude demanding we (gays and lesbians) alter our lives, our loves, and our NATURAL attractions for others. And when we do not, when we declare, celebrate and shout at the tops of our proud lungs, we love gay men or we love lesbians, the trans community's first reaction is to call us TRANSPHOBIC because our attractions and loves do not include them! And why would it? Would I suddenly be attracted to a man whose penis was torn off in an accident? Of course not, because he isnt the sum of his parts, he is the sum of his nature, his womb developed born nature!

And there isnt any accident, any drugs, and cosmetic surgeries or any amount of make up and heels that's going to change that! Having a gay brother and a gay best friend, I cant tell you right now, as gay men they do not have a problem with men with small penis's, they do however have a problem dating FEMALES! They will fuck a female in desperate times, but they arent going to fall madly in love with one, regardless of her superficial masculine state and they certainly arent going to desire spending the rest of their gay lives with a female. Again, that doesnt make them "transphobic", what it makes them is GAY!

How fucking dare this person demand "respect" from the gay community when she clearly does not respect the gay community herself!!!!!!! Utter BULLSHIT! And the trans community can come on here and say "well that just one persons view", but as someone whose VERY familiar with what goes on and gets said behind the trans fence, this one trans(man) is a drop in the gay trans(male) bucket regarding their attitude and disrespect of the gay and lesbian community!