Some Hard TRUTHS about SRS and SRS Regrets

Part of this post comes from an article recently sited in another post, full article here. The caps from the article deal with a couple of examples of trans regrets/misdiagnoses and the second set of screen caps are from those who've had trans surgeries (mutilations) that resulted in various complications. Complications seeming to be the norm, the extent of complications obviously varies per person. 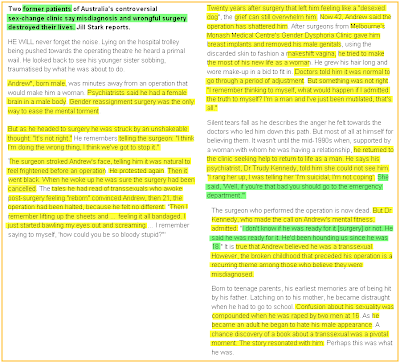 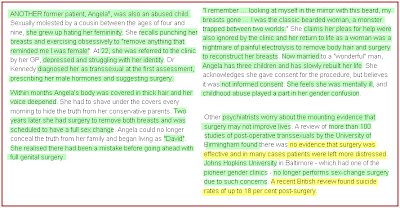 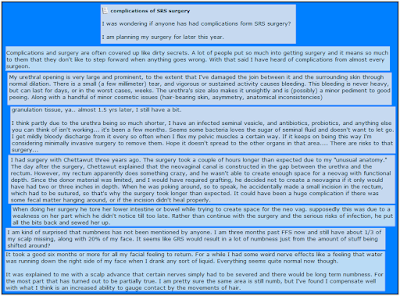 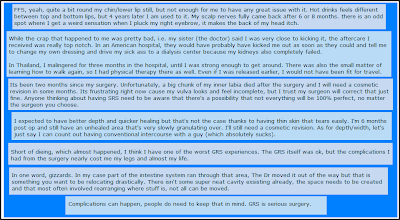 Explain to me how the world wide medical community remains surgically brutalizing (according to them) mentally ill people as a means to "cure" their mental illness??? What century is this?? Is maintaining the status quo more important than individual lives??? Lives forever changed, changed in ways we saw (ice pick) lobotomies change forever the personalities of tens of thousands world wide, with some complications showing themselves immediately with relation to altered personalities, to complications that caused early deaths that were NOT foreseen!

How many many many lobotomy patients were merely depressed housewives with 5+ kids? Angry young women who refused to conform to parental/societal expectations? How many were young men too angry or maybe worse, much too sensitive? The literary genius Janet Frame found herself on that list and had her work not won the highest literary award in New Zealand a few days before, she too would have been lobotomized. Like Freeman and his ice pick lobotomies, I've no doubt the medical community will eventually catch up and begin TRULY treated those suffering from body shame/body dysphoria/gender shame/gender dysphoria, but like Freeman's ice pick lobotomy patients how many will forever be altered permanently by drugs and surgeries for a mental cure all till that time comes?

In the short term there is some hope of having GID removed from the next version of the DSM in 2013. While this is no solution to what is clearly mental, it would however halt at least temporarily many who are using private medical and countries with national health care from funding their transitions. Because there would still be a need from those who have the trans disorder, it may persuade some in the medical community to create alternatives in the way of therapies which would treat the issues where they had arisen, mentally. I have been recently contacted by the American Psychiatric Institute for Research and Education regarding input on the DSM 5, keep your fingers crossed! Change might just be around the corner!