"Queer" Campus Groups and a College Near You

Having the emailer's permission I wanted to share a recent email I received that covers the "queer" (queer meaning not gay, not lesbian but anything else) trend taking place at colleges across the states and across the globe. A trend that began in the early 90's when "queer theory" and "gender studies" began eradicating Lesbian Studies (which no longer exist) and Women's Studies (which are on the verge of extinction). 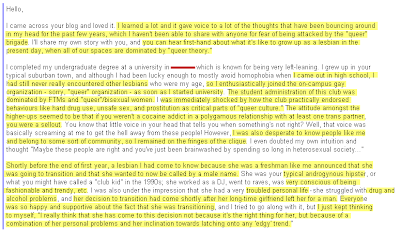 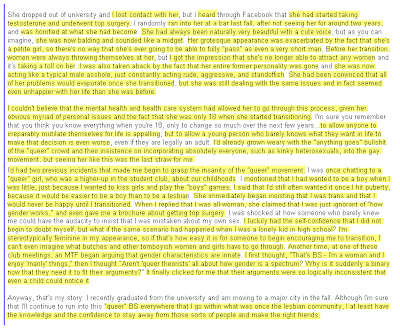 Sadly this young lesbian's voice and experience has become the trend among college lesbians seeking a home with other lesbians on campus's within the campus GLBT group/s, but instead of a home they find themselves alienated from the dominant group/group discourse. The tragic part of this, besides the co-option/erasure of lesbians by the hetero-privileged "queer women" reigning supreme over the lesbians within these groups is what happens to the lesbians these "queer women" have convinced to transition? These "queer women" who after they've turned in their cap an gown are going to simply graduate back into hetero-patriarchy and be married/married with children by the time they reach their thirty's. The fact is were they then to run into a single one of these transitioned lesbians on the street they will proceed as if they had never laid eyes on them before, despite having held their hand through the removal of both their HEALTHY breast.

On one hand they are no different than the 4 year lesbians of yesteryear, on the other much worse and much more dangerous because in the past a lesbian was merely left with a broken heart, today she is left drugged and mutilated into a monstrosity along with that broken heart. Take heed young lesbians, take heed.

I am receiving more and more emails along these lines, some who like this young woman who have allowed me to share her story with you and others too afraid of being "slandered", "attacked" and called "transphobic" to have their stories made public. What are your GLBT campus experiences as a lesbian? I would like to hear and like others to hear these stories, stories that have become the norm rather than the exception. Please email me at dirtywhiteboi67@yahoo.com if you would like to share/vent. And specify if I may utilize your story publicly here for the good of other lesbians going through similar and as a warning to lesbians considering joining campus lesbian groups.

I am thinking about creating a space for lesbians who are being pressured to transition, thoughts?