Exposing Trans lies and misogyny under the guise of a Transman

I try and generally do keep this blog and its posts here drama free, as I much prefer the serious and serious discussion/commenting because the issues here ARE serious, ARE life and death in fact for many. That said, I hope this doesnt come off as dramafying, as I post it with the same seriousness as I do when writing about Butch Shame or Femme invisibility.

I received an email last night claiming to be from a female who was forced (it seemed) to take "T"/transition, they wrote to me according to their email subject because they wanted me to use their story to warm other females about the negative effects of testosterone etc. Here are the pertinent snippets from their email to me: 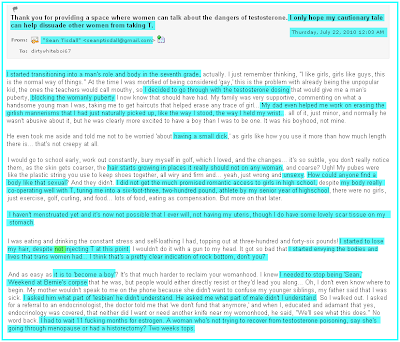 Reading through this I was immediately suspicious because (besides it sounding totally contrived) they contradict themselves. They claim on one hand to have began "T" at around age 12/13 (7th grade) then after high school claimed they were going bald despite not having used "T". Not to mention there arent too many 6'3 200+ pound females out there and "T" might create male secondary characteristics, it isnt a growth hormone!

Needless to say I did a bit of research and found that Sean Tisdall, the man who sent the email claiming he was a trans(man) by force, was really Sean Tisdall in real time, Valerie Keefe online. See here:

Then researching a bit further for a more thorough verification I found this along with the same "weekend and Bernies" reference he made in his fabricated trans(man) email story to me. 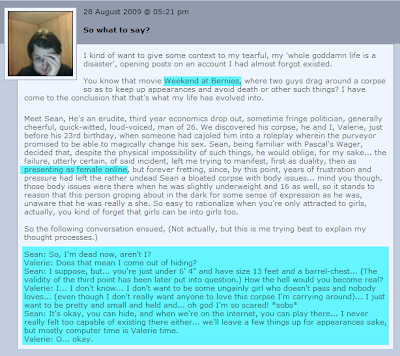 Once I figured out this man's LIES, while skimming through a few of his journal posts I spotted this recent comment made about trans(men):

I post this for several reasons, one because this kinda bullshit needs to be exposed, I dont know the motivation behind this guy's LIES but I do know he is clearly unbalanced. (no, this isnt me saying every trans person under the sun is a nut job, this is me saying this one IS)

Two, I post this as a warning for any trans(men) that may know or think this guy is your friend. He isnt. He hates women and it seems he hates trans(men) even more. I wont say that this man is a typical autogynephile, but I will say he is a definite autogynephile! One whom it seems has such a deep seated hatred of women he's transferred that onto trans(men) as well. Which indicates he despises them for their natural female biology(which he'll never possess) and because once transitioned/passing he perceives them as a threat/competition for what his male privilege informs him belongs only to "real" men which to him they are not.

And lastly I post this because throughout the posts I read from him in various places, he has some SERIOUS pathological anger and hatred of what he calls "radfems" as in radical feminist and radical lesbian feminist (he fancies himself a 'lesbian'). So to any radical feminist who has dealt with this guy under his "valerie" guise, beware and remember he is a 6'3 340+ pound man first and foremost.