Along with the Weekend Womens Day of Remembrance it was suggested recently to me to bring to your attention the "top surgery" doktors as a regular feature here. I'll begin by focusing on those  doktors who are primarily known for this mutilative "treatment" then move to the lesser well known doktors as time goes on.

Featuring today Michael L Brownstein. Here are some samples of his "work" from his website. Note interestingly the bare chested woman in the last photo, exclaiming this "doctor" made her bare/no breastedness possible. These are the messages that reinforce women's breast as sexual objects not worthy of being seen unless its for the sexual pleasure of the male gaze. Where are the messages informing women they have every right to bare their breast with the same freedoms as men without the threat of rape/arrest/ridicule???? I cant seem to find those on Mr. Brownstein's website anywhere..hmmm Nope, no such messages, the message here is lose the tits and you can be free to go shirtless like the menz...(for a steep PRICE) of course. Here are some other sample's from various websites that didnt make it into the good Doktor's good work pics: 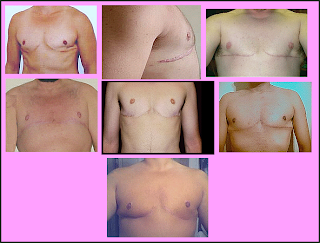 Note to the left of this website the "ftM" and "Mtf" info links pics. Unrealistic pics of a male upper body and a female upper body(note also the faux breast in the female image), both images created from current patriarchal idealized images of what the male/female body SHOULD look like according to men; giving the message to the already body dysphoric/dysmorphic individuals seeking "help" that if they go through this doktor they too can have the unreal body in these unreal pics and be the "man" or "woman" their disorder has conned their brains into thinking they could be.

I thought this interesting, pec implants for back up just in case the faux male hormones dont work, the diet and exercise doesnt work (if you bother to) and of course if the good doktor doesnt manage to give you quite the results you believed he could(which he cant). So you can go from real tits to a fake chest resembling the real breast you just had hacked off. And given the pics on his website and those I presented which all the while appearing flat, yes, still clearly look very female. Imagine then one of these body dysphoric females getting the pec implants? She could end up potentially with larger breast than what she started!

Have a read of this too, sounds to me like the "misinformation" might be some complaints the doktor is trying to cover up.

Dont let this doktor continue to butcher the HEALTHY breast from the mentally UNHEALTHY. Take a minute to contact the complaints board in CA where this doktor "practices" his mutilations of healthy bodied women.

STOP THE ABUSE OF THE MENTALLY ILL