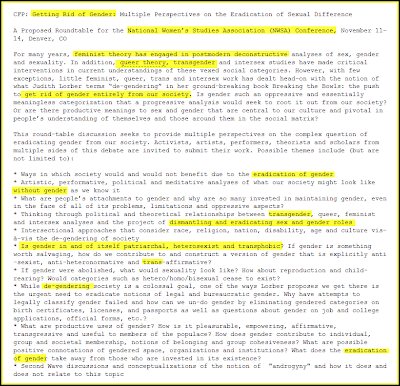 Here is the other email I referred to in my last post. More idiotic than the "discussion" regarding men in women's private spaces.

"Getting rid of gender"? Are you fucking kidding me? Wouldnt that be better discussed at say a national _____ conference, rather than a WOMENS conference?

There isnt a thing wrong with gender, there are men, there are women, and a small minority of in-betweens who are themselves predominantly male or female and live as such (provided they are allowed).

The problems arise when individual males and females are too cowardly, too ashamed, too ignorant, too self hating (due to patriarchal misogynistic systems in place which they fail to fight/see through) to live being the kind of male or female they naturally are. (and I am not speaking of autogynephiles (hetero Mtfs) here-clearly thats a serious mental illness) There isnt anything wrong with male or female, there is everything wrong with how post modernism has easily convinced the desperate that male and female is more than male and female to the point some actually THINK they are one sex "on the inside" and another sex "on the outside". WHA? Gender equals sex, always has, always will. You can thank post modernism for some ignorantly thinking like "sex" they can mutilate words into a whole new meaning mid-way through as well. But to the majority who live and breath reality, those changes only occur in the heads of ignorant or disordered.

Getting back on track, this is more of men doing what men do, wasting womens time with BULL SHIT in order to keep women from working on REAL WOMENS issues.