Marci Bowers regularly performs female genital mutilation surgeries on ftMISOGYNYST women. Marci (Mark) Bowers also happens to be a MISOGYNISTtfaux (Mtf). Here are some samples of what he's doing to the "trans" disordered women (who pay out the nose btw) to see him. 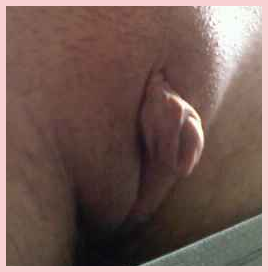 Looking at the Doktor's work here I cannot help but ask wtf did this poor woman pay a minimum of $4000 for?? Your average women could shave her pussy and achieve the same results!

This is yet another example of misogyny in action! This Doktor is charging "trans" disordered females exorbitant amounts of money for results (a male penis) he cannot provide. The ftMISOGYNIST who see Doktor Bowers go in with an idea in their poor disordered brains of the "man" they are going to be when they leave. But what happens to the already disordered self image when one looks in the mirror and still sees their pussy staring back at them? Even the pussy's w/plastic balls STILL look like pussy's w/plastic balls!

I have to wonder how much jealously also plays a part in Mtf Doktor Bowers practice towards is female patients.

At any rate, here is another doktor whose mutilative practices are harming women, both physically and mentally, permanently! Doktor Bowers email is at the bottom of his website let him and the complaints board know these "procedures" are UNFUCKINGEXCEPTABLE!