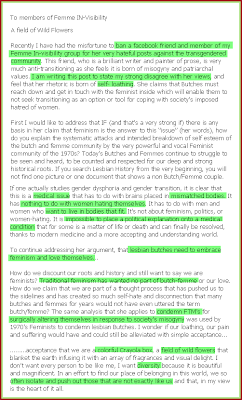 Yesterday a Butch friend sent me a message asking if I had been aware of the post you see here. She said she along with 300 other plus members received this message in a facebook group regarding Femme Invisibility. No, I wasn't aware of that. I had seen the message on a note I was included on from the Femme who issued this, but I had no idea this went to every woman in this particular group. Clearly this woman is no "friend", and clearly these are not the actions of a friend, at least not where I come from. These are the actions however of a very cowardly, insecure, self hating woman who completely bends to the slightest of pressures. I've debated for the last two days on whether or not to post about this, and after much thought I decided it not only in my best interest (for the sake of clarity) but in the interest of truth which I hold as high as I hold nature herself.

I will give you a blow by blow as I understand it, then my feelings on the matter. Sometime last week I believe, a member of this "femme invisibility" group commented this:  "I was sharing my frustrations about femme invisibility a while ago, and was reminded by a friend that many transwomen regularly experience femme hyper-visibility". Obviously after reading such nonsense I commented something to the affect of the complete co-option of Femme identity and misogyny of such nonsense. Clearly to even take into account such a post modernistic (be-anything-you-can-think-of) notions, the woman who commented has no respect for women and even less for Femme lesbians, given she would even entertain the thought of how a MAN (autogynephile btw) feels in a FEMME community. WHA? Not being exactly new to how misogyny coupled with post modernism (which equals queer theory in a nutshell) has infiltrated the Femme/Butch community I expected a small bit of flack. The FB "friend" who wrote the above is one of the maintainers of the group, if I hadn't mentioned that yet. She commented back to me that men are allowed in her "femme invisibility" group to co-opt Femme identity as they choose and I need to take my opinions regarding truth and common sense elsewhere. I was immediately silenced aka "banned" per a very typical patriarchal tactic-women speaking the truth must be shut up at all cost or patriarchal systems will suffer and die.


Again, being banned, not something new when one is a speaker of ugly truths, as I am. That this was a "friend" who silenced my Butch woman's voice? Well that hurt my heart a bit. Not simply from a personal standpoint but because this silencing is another brick in the wall of Butch Invisibility. It affects us all because it says, you  have no voice here, here being Femme space. Men and male-centrism is more important than your Butch WOMAN'S voice in these Femme spaces. So while I grieve a little for my own hurt heart I grieve more for what this indicates for the hearts of my Butch sisters! Butch women were excluded from early feminists groups, then lesbian separatist groups and now from Femme/Butch spaces themselves! I would bet not a single woman in that community had even slightly harbored the idea of how these actions towards one Butch woman's voice affects how all Butch women will be affected, not one. And if by chance there were one Femme who did, this public attack of me by a "friend" no less, lets her know if she even wanted to open her mouth she too would be silenced and singled out as a "hater" of sorts.And patriarchy being what it is, women are conditioned that womens worth is built upon approval, therefore no approval equals worth/less. A smart patriarchal way to keep women in check, especially smart when other women are using it against other women. And by smart I mean sickening.


I also expected some fallout because very recently a lesbian I used to know was appointed a maintainer of this "femme inv." group. She claimed to have severed her "friendship" with me and my ex because of our "trans" views. But truth be told, she was gung ho on helping to rid an LJ "lesbian community" of its "trans" disordered when we first became "friends". I suspect it had more to do with the fact of her obsessive stalking of a close lesbian friend of mine. My friend G. ended up meeting her realtime because she had become part of a lesbian clique I was a part of. So when G. and her partner decided to get married she invited all from this clique to her weekend wedding. Both G. and her partner had concerns I'm told right off the bat regarding her "stability". Then when this lesbian started calling G. dozens of times a day for months on end, trying to initiate a romantic connection with her (whom my friend said "not even if she were the last dyke on earth"), my friend ceased even speaking with her online. After months of G's rebuffs the calls finally stopped. It was then both my ex and myself were "unfriended" by this particular lesbian. So can we say ummm "axe to grind"?


How much any of this has to do with DV's (the community maintainer) feeling the need to attack me on a public level, I dont know. But I bet more than even she knows. As to DV's misogynistic Butchphobic behaviour, unacceptable! Even the "trans" disordered who read this blog I'm sure will wonder what the hell she is talking about, as nearly nothing she said has anything to do with my convictions or what I write about. Clearly she is not a reader of this blog, or else she figured she could just blatantly lie about my stances since I was banned and couldn't refute them, perhaps a little of both. I advocate a NEW RADICAL LESBIANISM that incorporates a Wittigian radical feminism. I advocate Butch VISIBILITY. I advocate women (whatever the variety) learning to love themselves AS women. I advocate it be acceptable for women to say "I" without shame. I advocate mentally ill people be treated humanely, not drugged and mutilated into freaks of society. I advocate Butch FEMININITY. I advocate lesbians taking the L back from the alphabet soup it has been drowned in. While that doesnt even begin to cover it, you get my point, and if you are a regular reader, you know my point.


This public attack is also because I was on her "friends" list at FB. She pulled the juvenile school yard crap when the weak minded/hearted get caught talking to one of the "not so cool kids"(according to the crowd), they had to quickly let the "cool kid group" know "oh I was just telling him/her what a douche-bag I though they were" then laugh so their new "friends" will laugh and think they hate this kid as much as they do, even though none of them know said kid. Its for show, appearances, fear at not being liked. Remember what I said above about women and approval.


Regarding DV's advocating "diversity", what she and those of her simple mindset advocate is CONFORMITY. A person who does everything in their power to ID as a particular something isnt diverse, its the same old shit. A Butch woman who loves her body, her life, her spirit, her mind amid a lifetime of invisibility, erasure, shame is diverse! A Butch woman being present as a woman in ALL womens spaces is diverse! Interesting though, when Butches express such feelings, the first thing out of misogynist's mouths is "self hating" or "trans in denial". Hmmm wonder why that is? Projecting much? And DV's notions of "acceptance" is pure misogyny. I will NEVER accept a straight (white-middle-class) man as Femme! And the women that do are nothing more than pure products of patriarchy. These are the women who would have men in our bathrooms, showers, locker rooms. Because a MAN said he's a "lesbian" it must be so, because MEN MUST be listened to and obeyed! Yeah right! No man will EVER be Femme or lesbian! One has to wonder how little women value women when they not only allow men to co-opt female identity BUT advocate for men co-opting women's identity!


Only those who accuse others of "hate" hate. DV hates. She hates herself and hates her life. She struggles to convince herself and others how "happy" she is which only makes her hate herself more and feel more disappointed in herself. She is a page out of Fromm's Escape from Freedom, in every sense. She cannot comprehend how a Butch woman could feel good about herself as a woman, when she feels so failed as a woman which insinuates she does not really SEE Butches AS women. The "invisibility" she claims to be fighting isnt Femme Invisibility, it is a core self invisibility. Until she can work through her own issues of self, she will continue doing the nothing she has been doing regarding Femme Invisibility.

All this to say this is sign of where the Femme/Butch community has let itself be led,  Femme's turning on and attacking Butches all in order to gain male approval from MEN no less! Any Femme who chooses male in any form over that of Butch WOMEN is plain and simple no fucking Femme!