FGM-FTM see the difference? Me either!

I must say I find it ironic some UKians are in an uproar regarding FGM yet remain in complete silence (or worse support) about the female genital mutilations of ftM's! Stands to reason the UK government refuses to enforce laws stopping FGM's because if it actually worked to stymie this mutilation misogyny, the NHS (national health) would place itself into a situation where it would need to follow suit and halt the mutilations being performed on ftM women, because basically they amount to the very same thing and are a product of the very same thing: MISOGYNY! 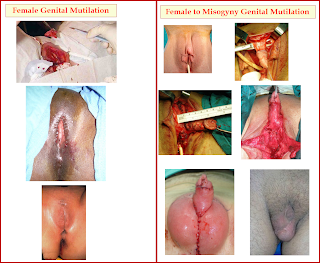