Josephina loses her mind at butch-femme 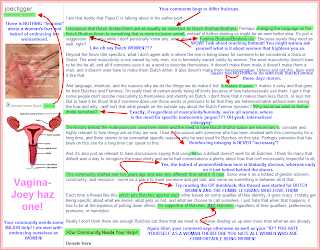 This comment was made in the thread I posted here about yesterday. Jo is a "male-ID" woman whose pathological misogyny reaches out beyond her personally, but further out into the Butch/Femme realm at BF.com because she is a maintainer (fruit-boysenberry) there. This right alots her the (male?) privilege to somewhat dictate/maintain the current misogynistic malecentric patriarchal sanctioned ideology that reaches into ever nook, cranny and crevice at this site.

As a casual observer I must say that I find it absolutely amusing watching Jo and the likes of Jo's, squirm in their seats in extremum discomfort when threads regarding Butches as WOMEN and/or Femmes as LESBIANS are created there. In fact it gladdens my heart and makes me smile.

Feminism IS alive and slowly but surely making its tender strong hands felt in Butch/Femme communities everywhere. Not only does time not sittly idly by, but you wont find change standing 'round with her hands in her pockets. Like it or not Butch/Femme WILL be drug out of the Dark Ages it has fallen back into the modern era where the word "woman" carries the strength and power of a every generation of woman since Lilith!