The Well of Loneliness and lesbian fiction

I read this article a few days ago. I capped it and various points because I wanted to make a few points of my own along the way.

I cant recall exactly when I read the Well, sometime in my early twenties though. I think at the time I was probably a little bit more interested in the facts/history that surrounded the novel, than the novel itself. An obscenity trial, V. Woolfs support regardless of her feelings toward the novels quality(or lack thereof), banned etc.

As a masculine female I obviously could relate to the Stephen characters youth, and masculine exuberances. But when it came to the novels romantic parts and ultimate romantic ending, despite not having had a romance of my own at that point (the dirter was a late bloomer) I just plain didnt buy the end of Stephen and Mary's romance. If one knows/is butch/femme one quickly casts Stephen and Mary into the butch/femme dynamic, which I did. So how is it regarless of what Mary believed regarding Stephen having had an affair, how is it she would turn to a man and not to another woman??? While I may have not had been with a femme yet, I still thought higher of them than this!

Thinking about the novel as a 41 y/o, I TOTALLY see it and Mary in not only a different light, but I feel a more accurate light. First there is the "married" neighbor lady who seduces Stephen for her own privileged needs and attentions. I know big shocker there, a straight woman using a butch to appease her boredom and selfish ego! GET OUT of HERE DIRT!

The pathetic needy little straight woman who needs a good butch to care for her(cuz in case you forgot butches are still naturally empathetic females) as well as take care of her. And like the male knight in shinning armor that have been among the masculine characters young masculine girls might relate (cuz we dont exist dontcha know), Stephen feels inclined and perhaps duty bound to rescue poor stone femme Mary! Yes I said stone femme, if this novel were written today Mary would likely be IDing as a "queer stone femme"! Easier to infiltrate lesbian (butch/femme) spaces when you half ass co-opt the lingo in order to blend in.

I also wanna point out the moronic Lee Lynch quote. Leave it to a crap ass writer to say the Well was "beautifully written and constructed, with delightful prose. It is the standard-bearer; the lesbian The Grapes of Wrath." !!! Reading my share of crap lesbian fiction I specifically remember when seeking out butch/femme fiction Lee Lynch was ALWAYS the author sited. Not only is she a ghastly fucking writer, she is also no fucking Butch! The first time I bought a novel by her and saw her pic on the back, I was shocked. Thinking why is this dyke being labeled a Butch? I went ahead and read a few of her novels and BOY was I spot on! In typical lesbian/dyke ignorance of butch/femme this idiot wrote a boy/girl story, changed all the "he's" to "she's" and called it a butch/femme story! The femme characters were also nothing more than stereotypical straight women.

I suspect if Lynch was a buddying early twentiers today that after a spell of falsely IDing as Butch, that in order to compensate for her Butch lackings, she'd probably trannify, and like many an ftM ignorantly think male hormones make you masculine...lol 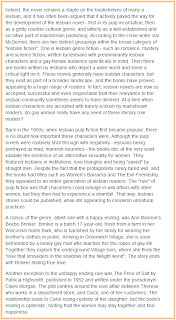 While I'm glad we have progressed from the fiction of scab lesbians skulking around dimly lit bars in order to find love and companionship with other women like themselves. I am disappointed and a fearful that lesbian fiction is fast becoming fiction with lesbians in it.

And fiction with lesbians in it, is nothing more than trendy writing/marketing aimed at equally trendy heteros who like to feel they are "with it" or PC on minority issues! When in fact if they were, they'd be as interested and familiar with likes of say a renee vivian as they are sarah waters. Lesbian writers today writing fiction with lesbians should take a cue from the "passing" blacks of yester year and see just how worth it polite white hetero acceptability is!