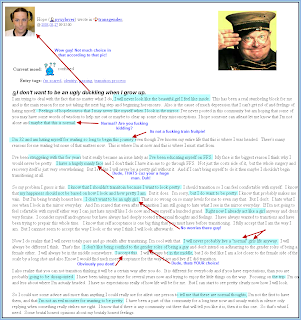 One thing that is clear from the myriad of posts like these that inundate the internet is just how little men REALLY know/understand woman.

By the very fact that all this man concerns himself with is being a "pretty woman" or nothing at all, emphasizes his male conditioned, male privilege, male gazed ideas of "woman" and his obviously disinterest/ignorance of woman herself.

That being said, I must say I find it an interesting bind when I read this sort of thing. Men who have been conditioned by men (who have all the power) are now measuring themselves against established male standards set for women while trying to emulate the IDEA "woman".

It is ALWAYS in the "trying" to be "women" that Mtf's miserably fail. Putting aside the biological impossibility of becoming another, for those disordered enough to attempt the feat and base themselves on an IDEA ("women") rather that than the real, failure is a given outcome Mtf's prove to us women again and again.

Using the above as our typical Mtf example, the only reason this man desires to appear "pretty" is not because he is interested in how others perceive him but rather how his cock responds to his perceptions of himself as "woman"!

If Mtf's really believed they were women and not the masturbatory "woman", their primary concern wouldnt be how "pretty" a woman!