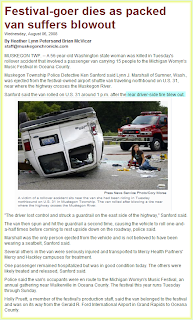 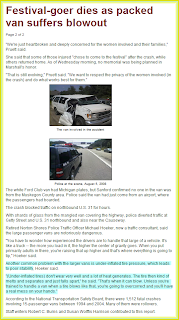 I heard about this calamity a few nights ago. I immediately lit a candle that continues to burn for the woman dead/the women involved and the spirit of the fest. As I have gone about these last few days, doing laundry, vacuuming, tidying up and feeding the cats (you know, the stuff of life) whenever the eyes of the candle's flame meet my eyes, my heart beats a prayer clean through my chest wrapping 'round the universe for all of womankind.

Patti Smith once wrote "the storm that rends harm/also makes fertile" and that prayer that has slipped through my chest is that this tragedy will do the same.

On an equally passionate though perhaps more earthly note I feel I must voice this other frightful thought that has flickered cross my mind as the candle's flame flickers.

And it is this hate which has literally woke me up in the middle of the night, the night I first read about this "accident". Many emotions leaped forth occupying my mind when I heard the news. The survivors guilt many MichFest members may feel, the grief stricken friends and family will feel, and my own selfish feelings for a woman I did not know, and yet still feel the sting because unlike the legion of "queer" women infiltrating lesbianism and lesbian spaces everywhere, this woman was one of the few and we cannot afford this loss.

But as I closed my eyes, my minds eyes closed as well, and sometime during this pleasant void, a lightning jolt of reality jump started my heart and mind awake with several ugly questions which I leave with you:

1) In what proximity is "camp trans" from MichFest?
2) How secure are the shuttle van/s when not in use? (are they guarded?)
3) Could trans terrorist actions have lead to leaking out the air in the shuttle van/s tire in order to subvert the transportation of WBW to/fro MichFest?
4) As I have received countless death threats myself from trans females/males and I am only a single butch woman with a short history of speaking out against transition, am I being paranoid to think that "trans fundamentalist" would stoop so low to disrupt a 30+ year strong women only event?