I was contacted earlier from a girl I had went to school with, we also were both in the same kindergarten class together. I just sent her a copy of our kinder class pic so I thought I'd share here as well. Was I all fucking sweet and innocent looking or fucking what??? 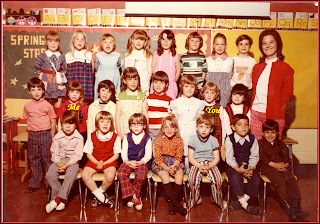 ps in those immortal words of rickie ricardo WHAT HAPPEN????

pps On a similar note, this chick I'm talking about had this cousin (bruce) who I was friends with. Well after I had quit school, my cousin tommy and I would still attend the basketball games at my school. Somehow, tommy and I hooked up with Bruce and another friend of mine, Mike. At some point during the game, the four of us were fucking around in the schools hall. We all went into the assembly hall where there was this room where they made lunches at. This room had one door and a sliding coiling window, just fucking around I started trying to yank this sliding coil window up. The damn thing came up enough for me to climb underneath it. I slide in, unlocked the door and let the others in.

We all four spotted two HUGE bags of pop cans! The deposits from these cans where used to save money for the senior trip. There was another door that went from the parking lot into the assembly hall. Mike and Bruce went and got Mike's car and pulled it next to that door, we loaded all the pop cans in and the four of us went to Meijers and CASHED in ALL those fucking cans! Over $30 bucks! We split the money, they dropped tommy and I back off to my car and tommy and I ate like chumps at McD's that night!
Posted by dirt at August 18, 2008