This has become an all too familiar thread occupying butch/femme sites everywhere.

Butch/Femme sites across the net have become so heterocentric/malecentric that any woman with even the slightest bit of masculinity is automatically relegated to a male/male pronoun status. These current butch/femme sites are either ran or dominated by disturbed angry straight women who freely use their straight privilege to reign supreme over any butch/femme lesbian on the site.

Masculine lesbians looking for acceptance and visibility as masculine women are quickly taught at these sites that female masculinity is shameful and unequal to male masculinity and if they are in fact "real butches" they will ID as male and customize(drugs/mutilation)their bodies to suit the "queer stone femmes"-aka straight women there if they truely want to be desired and accepted.

Catering to misogyny is anything but accepting, it is the same old patriarchal practices cloaked in butch/femme swaddlings! Here is another disordered comment from the OP: 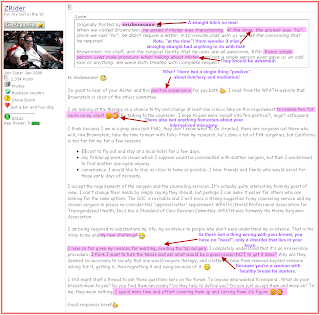 Nowhere in posts like these do we ever see a butch or a femme rail against this kind of insane interalized misogyny. We see either "fors" or silences. Butches are afraid to take an against stand because they fear doing so would put their fragile mascuinity in jeopardy. And femmes are afraid to say anything against because they fear they may cock block themselves from future Butch attentions. Its a lose/lose situation for Butches.

The REAL Butches and Femmes occupying these sites who are standing 'round blankly waiting for the winds to change, need to remember that every healthy breast hacked off the body of Butch woman is yet another nail in the coffin of female masculinity!