I have read some pretty angry, petty and ignorant male privileged things from Mtf males regarding women and lesbians, but this by far surely has to be the MOST deranged! Talk about taking the cake!

Obviously this guy is full of shit, not only about his claims, but his typical ignorance of where lesbians stand in the world, ESPECIALLY the judicial world! The mere rumor that a female is a lesbian is still a tactic used by many fathers in order to gain custody over their children during divorce proceedings, so for this guy to assert HE has been beaten and gang raped by a group of lesbians and their male thugs would at the very least send the police 'round for an inquiry. Not to mention here as in much of the post he contradicts himself.

This reads to me like nothing more than the bitter angry ramblings of yet another male trans misogynist. Who btw happen to be worst offenders of misogyny because unlike the misogyny we're all subtly conditioned with through our lives, male trans misogyny is a pathological misogyny.

Men like this hate women, not simply because they have been conditioned to dislike/reject subtle femaleness BUT because woman is something they can never be/own regardless of their strivings. And not simply because of the biological impossibility, but also because the woman they are trying to create is "woman" and NOT the authentic woman. The trans males "woman" is nothing more than a one dimentional figure which trans males have been informed from birth about by the patriarchal male gaze. And that "woman" is as artificially a woman as are they!

Now this particular male has through the blur of his disordered haze and coupled with his ignorantly informed male gazed ideas surrounding "woman", believed he was going to cover himself in honey and throw himself to the lesbians and never look back. Only to be tossed right back to whence he came because LESBIANS DO NOT DATE/FUCK MEN, PERIOD! The male privilege that has allowed him to believe he is a woman, also allowed him into believing he is also a lesbian, simply because HE said so! And while that may work perfectly well in hetsville, a few streets over in dykesville, we dykes do not need male approval therefore we do not have to tolerate male bullshit!

Now he's mad, alone and probably made crazier because of hormones not suited for his male system. Reading slightly between the lines of this non sense one can clearly see he not only wishes to physically harm lesbians, BUT to RAPE them as well. He basically says as much then assuages his disordered conscience by claiming his feelings derive from revenge motives rather than the truth, which is he is angry because the lesbians rejected HIM! How dare women have a say about who they fuck, thats crazy shit man! 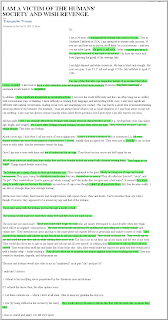 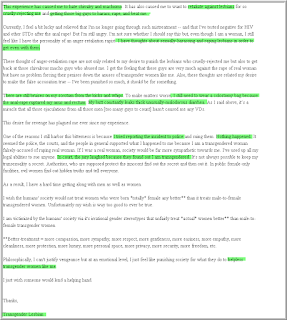