It is not surprising BDDed men and women initially turn to drugs and/or drink in order to ease their troubles coupled with their growing dysphoria. It is also no surprise after being drugged further by the ME, and many mutilated as well, they either continue or return to drugs and alcohol abuses during/after "treatment".

One thing these guys are all right about is the 23% number regarding "suicidal tendencies" among trannyism sufferers is unquestioningly much MUCH higher!

These other self abuses are equally NOT being addressed by the ME when "treating" the tranny sufferer. Its wrongly assumed by an ignorant ME that these other abuses are directly a result of trannyism and will cease and desist once the ME initiates its only drug and mutilation "treatments".

Which would be fine and dandy if that were the case but it isnt, not by a long shot! While there are three prime aspects all tranny sufferers share (misogyny/visibility/narcissism) there are very personal paths each tranny travels to get from point A to point B. Not only are the prime aspects of trannyism NEVER addressed by the ME, the personal issues of each individual tranny are completely ignored!

So is it all that surprising to us after one would expect all to be said and done once "treated", there still remains ALL the troubles that led each tranny to trannyism?

Sadly there still remains 60+ years after drugging and mutilating thousands of healthy bodied men and women no major study of suicidal feelings/depression/drugs and alcohol abuses AFTER being "treated" by the ME. But if the myriad of trans communities and forums that have flourished across the net are any indication of the success of the ME's drug/mutilation therapy then we have yet to see an actual trans success story. 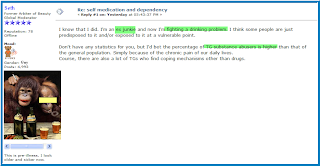