Ah Mich fest, it either inspires happiness or hatred. I ran across these couple of threads this morning while seeing whats up at straightpeopleactingbutchfemme.com.

Caps from the first link...

Afew caps from the second link... 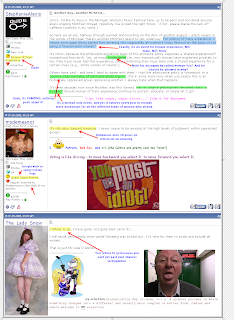 Its fucking amazing 30+ years on Mich fest still has to defend its right to preserve a space one paltry week out of the fucking year for women/lesbians only.

I dont know what I find more nauseating, the disordered men who seem shocked there exist spaces their male privilege doesnt give them complete access and a backstage pass to, or the privileged straight women who disguise their fucking lezbophobia by claiming they wont go because the menz arent allowed in!

Equally loathsome in this case is both parties are spewing their misogynistic bile from the occupancy of LESBIAN web space, since this site misleadingly claims to being a butch/femme site as their name (butchfemmedance) implies! Yet even if we combine every comment between these two posts, last I checked out of 27 total comments only 2 of the commentors were actual lesbian women! INCREDIBLE!

THIS is why it is SO important to have lesbian spaces and to diligently fight to maintain those spaces with fierceness as well as stringency! Lesbian net spaces have already become eroded since their invasion by straight privileged women, many whom are married. Invaded by women who "love" women because they love their men and their men "love" them "loving" women, especially for their viewing/masturbatory pleasures.

Lesbian sites all over the net are brim filled with non lesbians, with lesbians fucking taking it, and fucking taking it either sitting down or ignorantly holding open fucking doors or handing out fucking keys! Have we become so conditioned by the patriarchy to play nice we're going to lay ourselves down naked, legs spread and let our spaces be raped and fucked over by any passers by who claims to be a fucking "queer"???

In the last ten years this trend has even spilled over into butch/femme areas! Which as a very small sub community of the larger lesbian community has nearly been erased due to the influx of non butch/non femme men and women squatters. Butch/femme spaces everywhere net and RT alike are now occupied predominantly by disordered males, disordered females, damaged straight women masquerading as femme, softball dykes masquerading as butches and only a slight dusting of actual butch/femme lesbians.

Mich Fest fortunately still remains a small space for lesbians and a larger space for womankind, lets keep it that way, and use it as the inspiration it is to reclaim the oceans of ground we've let slip from our capable fingers.

ps mouse over blue highlights for dirt comments.
Posted by dirt at July 28, 2008