To T or not to T, THAT is the question

One would think this a simple enough straight forward post and would receive some simple straight forward answers and in most communities thats exactly what would happen, but in trannyland? 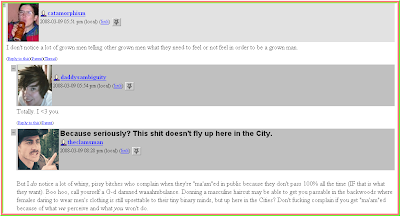 Of course this turns into a trainwreck when the batshit crazy catamorphism gets involved!

If you're a tran, when in doubt perpetrate violence! 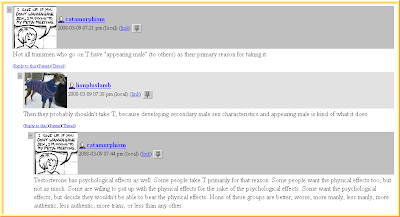 Leave it to our dear KRAZY cat to go on T so she can attain a "manly brain" (has she been hanging out with Summers)! Seriously though, I would wager HUGE bucks that I dont have to bet she LIED (there's that word again when discussing trans issues) to her doctors about her reasons for wanting "T". As fucked up as the medical establishment is, I dont believe even they are crazy enough to dole out "T" in order to aid a woman in ganing a "manly bean". Heaven help us all if they did!