Things REALLY are not THAT complicated 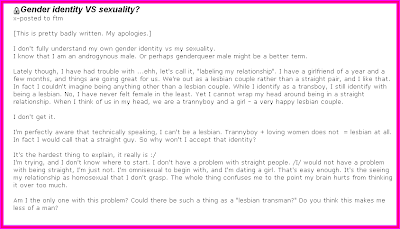 Your a girl, she's a girl, you like girls, equals lezbo, taking drugs doesnt change that. Although...lemme check...*takes two aspirin*...nope, still a lez! 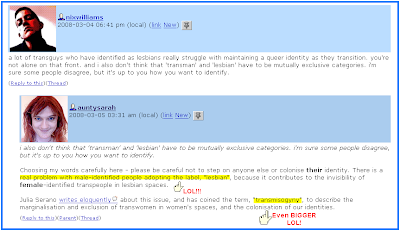 So now FEMALEt"m"'s shouldnt be privy to the "lesbian" label because its "trans-misoginistic" to the MALEt"w"'s????? Priceless! There isnt anything men will not rape and pillage from women, FOR themselves!

From the ever confused snakey who is soooooo disordered she's not sure if straight men and lesbians are the same thing or not! I swear that one is her own special kind of fucked up!

This one pretty much speaks for its self doesnt it!

Again with the shear homophobia among Malet"w"'s! UGH!