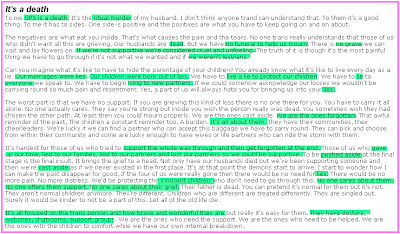 I was sent a few links earlier from a woman's personal LJ, for her privacy's sake I wont include any names. I do however feel this is HIGHLY important to put out there so people can see just a little of what goes on behind the closed doors of trannysville.

This post was made about a year ago, wonder how she's doing today with all this? Lets see...

This post was written a few months ago, things obviously have went from bad to worse!
This bullshit REEKS from the stench of male privilege! Because she's a woman she was expected to sacrifice EVERYTHING for her hubby's happiness regardless of where that put her AND their children! If she had an issue with his transition she's labeled "transphobic" and "unsupportive". WHAT???

All the more reason I pity anyone involved with those suffering from this disorder!