Did Radical Feminism Open the Door to Transitioning Children?

I have mentioned umpteen times on social media and written categorically here on the miscalculation/hapless strategy Radical Feminists place/d on Gender. Specifically on Radical Feminist's theorizing and then believing their theory that Gender (the not very well thought out idea, having no basis in reality (past or present), that collective man ie patriarchy, is responsible for the woes (however small or large) any and all Het women have regardless of how they ID) is the key to unlocking Het women's misery/weaknesses.

I have established how
Radical Feminist desperation for internal/external power superseded any care for the children harmed (many mortally harmed) by the MEN proposing the brain is born out of experience (constructed) rather than sex (biology) idea. Radical Feminist history that made children expendable and propped up the MEN whose theories supported theirs has changed very little in the last forty years. In this post I'll show how Radical Feminism/Feminism past eerily coincides with Radical Feminists/Feminists now, to the cold, bitter and bloody detriment of children today.

Early Radical Feminists/Feminists single minded focus on Gender as a social construct built by Collective man/Patriarchy to keep Het women down blinded them to the man/men (John Money et al) they climbed into bed with. Gender Identity, the Frankensteinian failed experiment tested on children, ignored by Radical Feminists whose eyes never strayed from the perceived greater prize, simultaneously green lighted the proliferation of Het male trans. Before Radical Feminists had time to wipe their own collective ass, Het male trans were entering spaces once occupied ONLY by females. By the time the 1980's commenced, it finally dawned on a few Radical Feminists (Houston we might have a problem)!

The first and primary initiate used by Radical Feminists/Feminists to gate keep male trans was the woman-born-woman idea. Meaning unless you are BORN (biology) female, you cannot become a woman. Male trans being born male cannot, regardless of cross sexed hormone treatment/plastic surgeries become women and therefore should not be allowed into women only spaces. Bear in mind, all this occurring while Radical Feminists/Feminists were using Feminism to enter spaces held previously only by men. Hmmmm!

The women/womyn-born-women/womyn policy worked to a point; because Feminists/especially male proponents of Feminism created legal equalities for the SEXES in the public sphere, Radical Feminists/Feminists could not discriminate against male trans without fear of legal reprisals. However privately owned properties like Michfest for instance, the women/womyn-born-women/womyn policy could stand so long as public/corporate sponsorships werent involved. Unfortunately men being men, male trans continued unabated to gain entrance to Michfest and the like and men being men, challenged/changed existing laws with which to do so successfully.

While male trans were busy fighting for the legal right to be women, Radical Feminists/Feminists had to step back, take stock and figure out a new tactic to keep men at bay. I suspect their brainstorming went a  little like this: 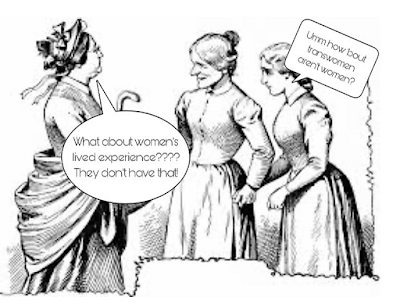 While there has been no shortages of "transwomen arent women" incantations throughout social media in the last decade, this alone has done nothing to slow male trans down, in fact it has had the opposite effect. By women calling these males some form/any form of woman (transwoman/transwomen), especially treating male trans the way Het women routinely treat each other, such as the extreme criticism of how women look. For example, this from Radical Feminist/Feminist/Gender Crits women criticizing a male trans celebrity:

The point being by addressing male trans as some form of woman, by treating them the way women generally treat each other, via a bitchy bitchfestiness, many male trans feel like they are finally just one of the girls! So Radical Feminists/Feminists began using the idea of female lived experience. What would a 60 year old man who has transitioned really KNOW about what it is to be a woman? To be treated by your parents/relatives/school/church/society as a girl/woman. Male trans may take hormones and have surgeries to help them better appear woman-like, they do not have however the lived experience that women have growing up as girls/women. Here Radical Feminists/Feminists believed they had made the ultimate chess move! But instead of checkmate, they should have checked themselves before the wrecked themselves AND innocent children! But while busily patting themselves on the back in a win for sisterhood, men continued to do what men do.

For the Heterosexual females reading this post, let me give you a little tip about men; when they strongly believe in a cause, they will work their butts off doing whatever is needed EVEN if they themselves will not benefit from the potential success. If criteria for woman is based on physical appearance AND lived experience then by golly so be it! Enter changes to the DSM 5, enter trans children. Trans lobbies couched trans children like any dis/ease, early detection means a greater chance for survival. It also means Radical Feminists/Feminists cannot say someone like Jazz Jennings does not have the lived experience of being RAISED a girl.

In effort to close the door they fought so hard to open, Radical Feminists/Feminists hooked up with the Gender Criticals, a small number of bored mostly conservative Homophobic mothers/housewives criticizing how other women were/are raising their children. Gender Crits claim the health of children being transitioned is the heart of their cause. Obviously a bullshit claim because Gender Crits are okay with adult transition. Clearly the numerous negative health effects from transition, do not magically stop the moment someone turns 18!

The Radical Feminist/Feminist/Gender Crit ménage has been too busy arguing amongst themselves, fucking each other, fucking each other over, climbing in and out of bed with religious-conservative MEN, attacking adult male trans at their homes/workplaces/social media and least we forget making stickers, t-shirts and posters with their hubby's hard earned coin. And how many children has this sundry circle jerk successfully stopped from the trans grist? Exactly at this time? Lets count them: nil, nada, none, nothing, zero, zilch, diddly-squat, sod-all, a goose egg, not a sausage and lets not NOT forget to count Sweet FA!

Social Media Feminism is like Tinder dating; the picture might look good, the profile read like a dream, but when you meet for the first date neither party can recognize the other from their profile fibs and neither bothered to fact check beyond the profile. Radical Feminists/Feminists saw Gender Crits opposition to trans children and said lets date! And Gender Crits saw Radical Feminists/Feminists history of anti trans and said YES!

But lets face it, the reality is Radical Feminism consisting of damaged Het women with a misdirected hatred toward collective man while Gender Criticalists are comprised of mostly bored mothers whose children are past needing diapering and whose hubby's are busy with anything/anyone except them. One group cannot see past their pathological hatred and the other cannot bear to see period; some people should not be dating!

Radical (STRAIGHTBIAN/Lesbian allies) Feminists/Feminists couldnt be bothered to notice Gender Crits extreme Homphobia, nor did Gender Crits bother to look beyond Radical Feminists/Feminists anti trans history to see it was Radical Feminism itself via dismantling Gender that ushered in the Transgender Movement, including the later move to transition children. And now its morning and both are crying coyote ugly. But gnawing off your own arm to get the fuck away from each other isnt going to bring back a healthy childhood to children lost to transition anymore than its going to prevent another child OR adult from the mental and physical harm of transition.

But regardless of the ongoing feminist catfights that always were and will be, Radical Feminism's Gender theories have proven to be a desecration to both women AND children.