Chapter 3 of Intercourse wastes no time, at once highlighting the evils of pornography while simultaneously temping us with the compulsion of "sweaters, skirts, shirts, and underthings"! Riveting! 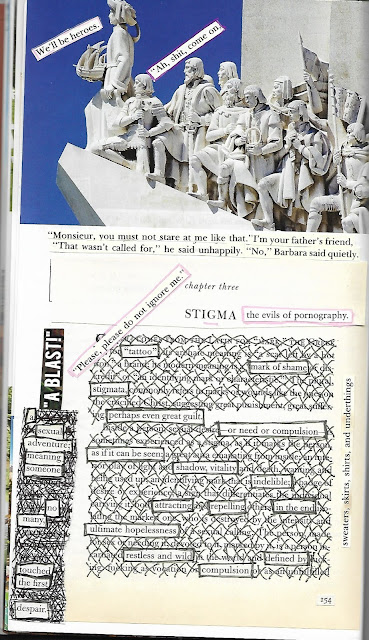 Right into the second page of chapter three "why we lie", is this a question or a statement or both? Is the "embellished" patriarchal "fantasy" real? Is "dreamland" the only safe space for Barbara (who the fuck is Barbara?) amid "vagabond men in cheap hotels"??? Or is this all some crazy metaphor for Het women using fantasy as an escape from the real/patriarchy and men using fantasy to sexually collide with the real? Hmmmm... 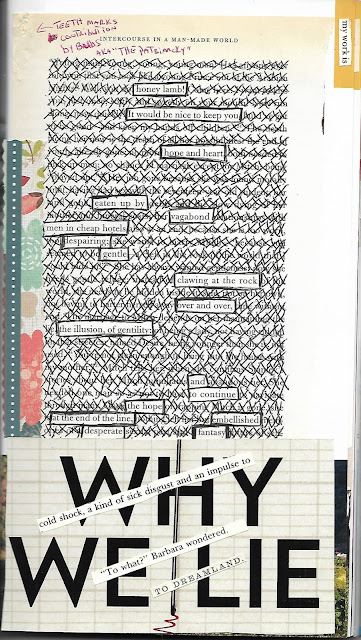 The next page BEGINS with a climax, smacking of postmodernism, talk about on your head brilliant! It then does a fast sprint through weak flesh, longing, blessed and introspection all culminating into a seeming bizarre question about imagining a "middle-aged Chinese lady...from the past"! What??? Is this comment on sex, power, intersectionality or all of the above? Colour me intrigued! 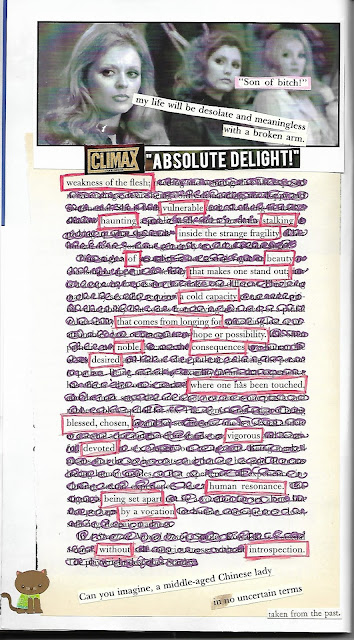 I like how this page sharply focuses on "she", her "nervous laugh" her "hidden" hysteria, her "stigmatized excitement" and "uncompromising passion"! We dont know who "she" is. Is this a "wicked" dream of "Paula's", "sexy, weird and banned"? I dont know. Is Paula among the people in the picture? What happened to Barbara? So many unanswered questions! 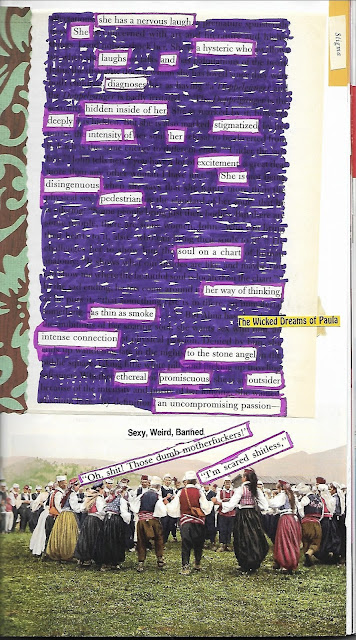 The Winston Churchill quote at the beginning of chapter four is a profound choice in my humble opinion. I'm still grasping the unplumbed gem regarding nakedness! The Kafkaesque K in AmeriKa was not lost on me, the "cottage cheese" reference might be, but wives wanting their husbands to fuck God? OMG! Brilliant subtle poetic genius that almost slips by and then BLAM, God is a woman! HOLY fuck! 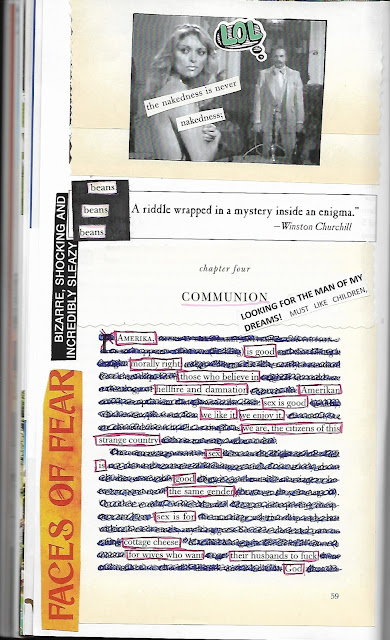 This page stripped it down to the "bare junk"! An exemplification of how Patriarchy used the act of procreation to destroy the language surrounding sex in order to give birth to "rape, pornography, and prostitution"! Then going further by depicting the power imbalance and racism of a "white woman" who tortures "James" a "black musician". Emphasizing white women's internal Patriarchal drive/lust to garner power (for themselves) over less dominant cultures; but more specifically here, smashing feminist lies about men and power by showing us WHITE women's power over men in less dominant cultures! I was breathless after this page I swear! 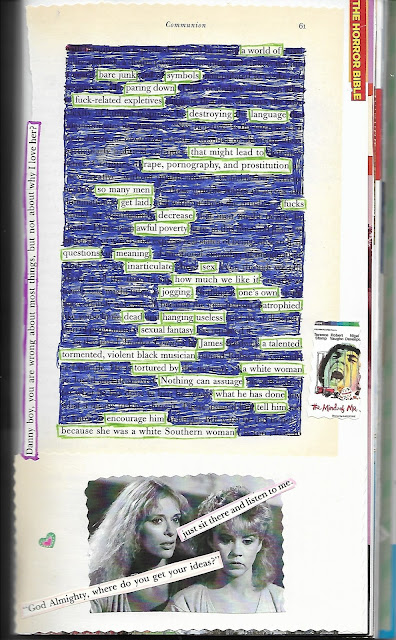 I read the next two pages as a dual piece, but will critique them separately. This is a very RAW and visceral piece that centers "fucking" at the center of the universe, giving us a different take of the Big BANG Theory! But wait, it doesnt stop there, we go from the immensity of the universe down to the needle point of one individual "street boy" whose "sordid" duties get "wiped clean" between the sheets. Brilliant to use a male prostitute to represent the w/hole of Heterosexual female relationships with men! Pointing out through the use of a doppelgänger that Het women's lives may be messy, sordid and squalid but when a man is fucking them, in that brief span all the drudgery of their day to day is forgotten and "wiped clean". Magnifying how and why centuries of women in horrific relationships remain with terrible, violent and abusive men, and continue to do so today! 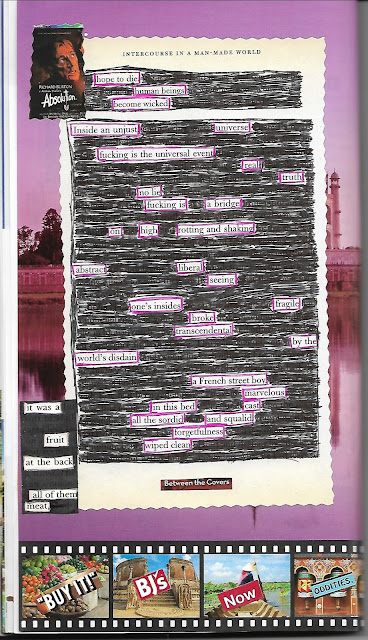 I can see why this was subtitled "identity crisis", this piece continues by juxtaposing whether Hetero sex is "sin" or "intimacy".  Drawing the question are Heterosexual women "predetermined" to be led to the "slaughter" through sex? Or is sex the slaughter? Hmmm... 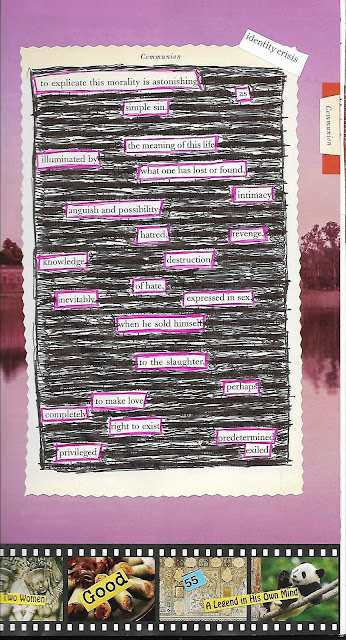 This page extends the Het women living in a dreamy utopia trope, only to wake from this peaceful fairy tale into reality which is a living nightmare! This seems to be saying that Heterosexual women require "fiction" to live because reality is far too difficult for their feeble constitutions. Which if we extrapolate would indicate the invention of the fair tale itself to the multi-billion dollar industry of romance! Whoa! 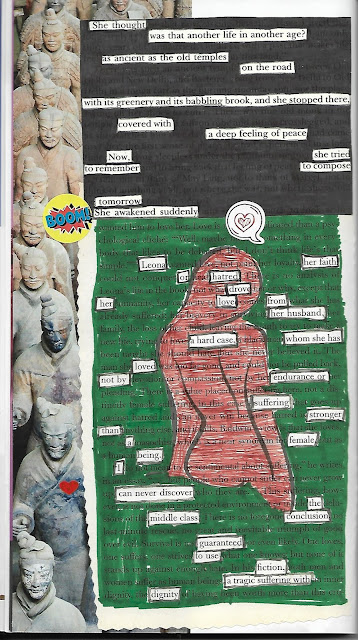 I loved the snarky apology at the end of chapter four, kind of a sorry/not sorry and the teeter-totter of male hope coupled with male violence. Brilliant! 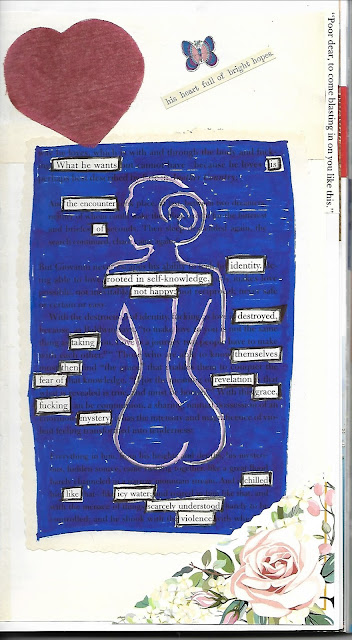