Yesterday Mrs Dirt ran across this article (An Open Letter to the Lesbian Community About Funding Projects) that was retweeted on Twitter, from the self identified "lesbian and bisexual" owned and operated website afterellen.com.

Dear lesbians and bisexual women: we need to talk. There’s a problem for our community on the horizon that we need to address. The problem is this: we’re not doing enough to put money into lesbian projects.

After this initial chiding the article continues:

Time and again, we say that we want more representation: more movies, more TV characters, more web series, more books, more graphic novels, more lesbian-only spaces, etc. If we want these things, we have to pay for them. And right now, we’re not doing a good enough job to save the things that we want. If we don’t step up, we’re going to lose some of what we have...

AfterEllen goes from chiding to a full out, full stop autocratic parental shaming tirade on how "lesbians and bisexuals" are not doing enough and need to do a better job with their hard earned dollars if they want mommy and mom...err afterellen.com to reward them with new and exciting gifts from the gods or goddesses or else!

After warning, yelling, threatening and shaming, AfterEllen continues in mommy mode, but switches from mean mommy to nice mommy on bent knee (so they're eye level) with "lesbians and bisexuals" explaining why they need to do better with their money:

But everyone got so used to free content on the Internet that now they expect it and will refuse to pay for content. As a result, professional websites (that is to say, not personal blogs) are struggling, trapped between the need to make money in order to continue running their business and the unwillingness of their users to chip in and make up for lost ad revenue.

Despite intently searching AE and the general internet, I failed to find a statistic on how many AE readers refused to pay or were unwilling to donate. If the sites owners have such numbers available I'll be more than happy to edit to add.

Also the "lost ad revenue" remark here is particularly offensive. Apparently according to the gals at AE, "lesbian and bisexual" readers are to blame for and I quote "LOST AD REVENUE"! Lost Ad revenue would actually fall into the domain of those responsible for the domain, ie the owners (Memoree Joelle with AE since 2016 and Gaye Chapman) along with anyone THEY hired to do their PR and managing work, not the poor readers! 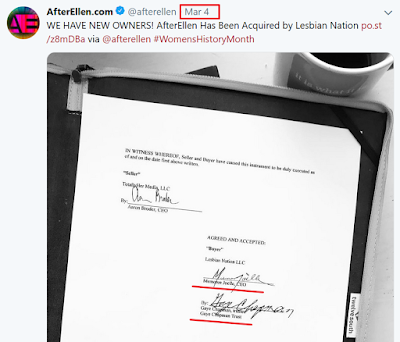 AE goes on and interestingly quotes themselves by saying:

The highlighted writing in red (theirs not mine) makes a bold statement by AE, disbelieving straight media "that lesbians have less disposable income" by saying that may be a minor factor BUT "that can’t be the full story"!!!!


The truth is, lesbians and bisexual women will contribute financially to things on an ad hoc basis.

Lesbians might not have much money compared to other demographics, but they can be very generous with what little they do have.

The article ends on particularly insulting and foul odorous note, further insulting their readership by calling them freeloaders!


There are certainly many wealthy lesbian and bi women, but we occupy the lower end of the financial spectrum with frightening regularity. Even if she is privileged in other ways (white, able-bodied, neurotypical, etc.), a gay woman has the financial odds stacked against her.

Aside from AE's own researched post linked above detailing "lesbians and bisexual" poverty, a mere Google search brings up a plethora of studies detailing the same: 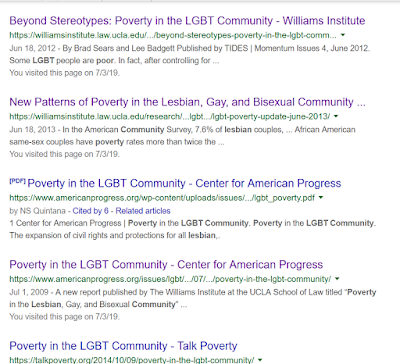 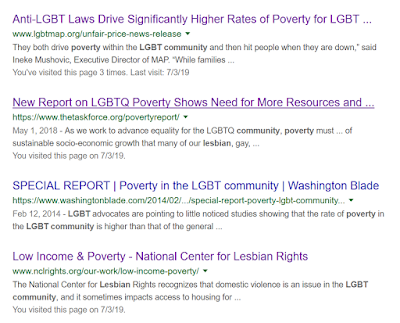 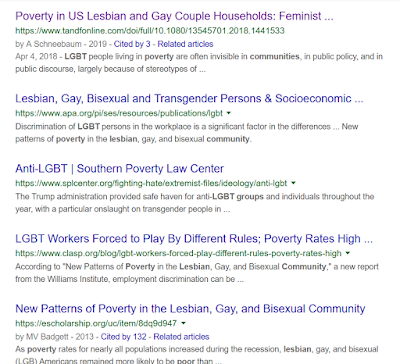 Clearly by AE's own admission in the above article, "lesbians and bisexuals" are more poverty stricken than most, and have less disposable income, granted this article was written prior to 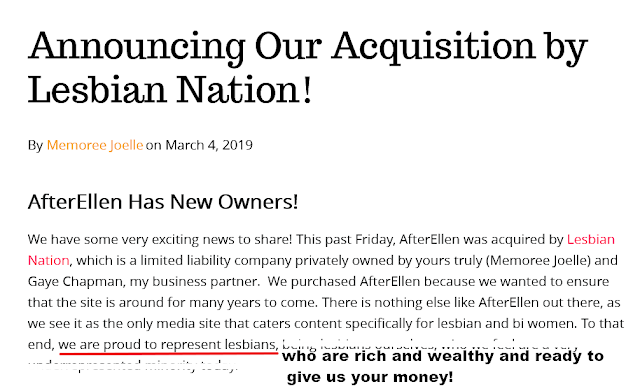 Meanwhile a few days (end of February 2019) prior to announcing the acquisition of AE by Memoree Joelle and Gaye Chapman: 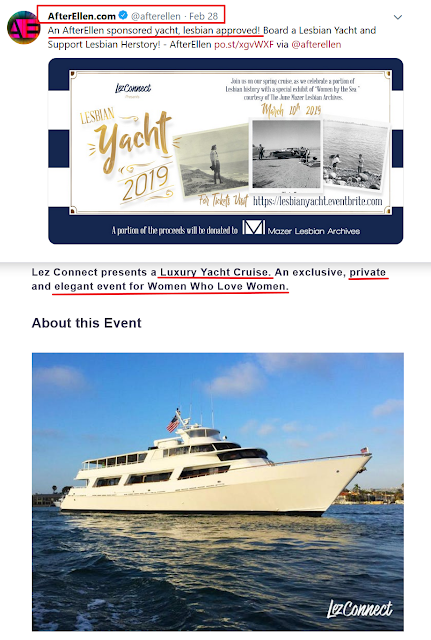 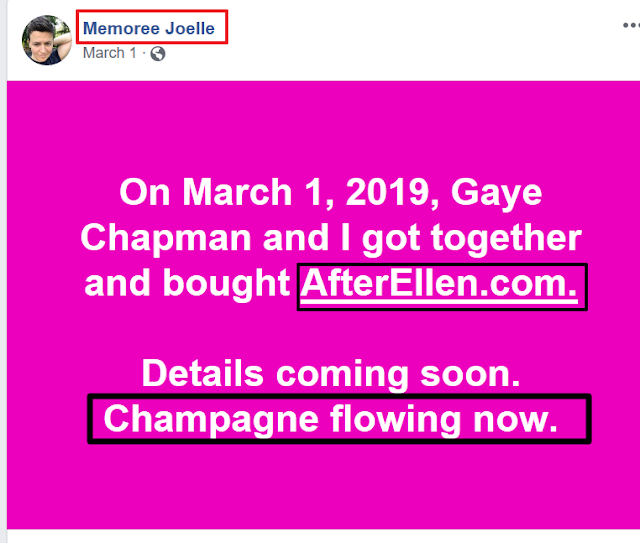 A few days after that: 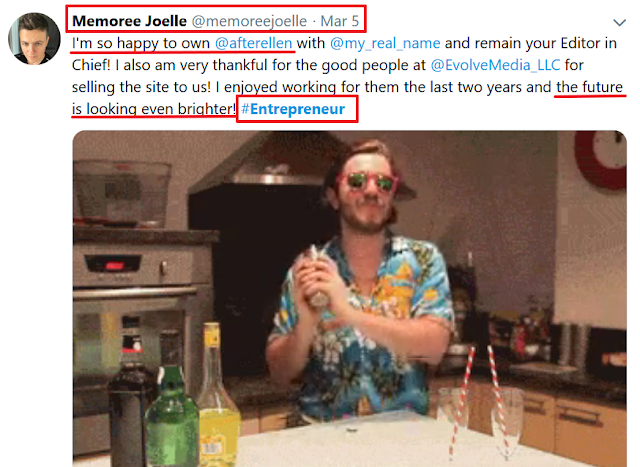 At least one member of the "lesbian and bisexual" duo feels quite comfy hashtagging herself an "entrepreneur"!

And since the article's author Karen Frost boast in her AE bio that:

My favorite city in the world is Paris, but Tanzania is the best vacation destination and Bangladesh will always be where my heart lies because of my time living there.

Given Miss Frost has stayed on and continues to write for AE, we can only assume she is still being paid huge wages in order to afford such extravagant vacations!

And least I also make mention, AE's own policy of:

Clearly AfterEllen has and sells space to advertisers, which the initial article blamed "lesbians and bisexuals" for "lost ad revenue".  So between the current acquisition of AE by Memoree Joelle and Gaye Chapman; luxury yacht cruises, flowing champagne and unknown marketing strategies to potential advertisers, the sites owners/staff are blaming "lesbian and bisexual" readers for their own empty coffers!

ps This blog has been operating since 2008 and guess what? ITS FREEEEEEEEEEEEEEEEEEE!
pps For a small fee places such as GoDaddy can house all your "lesbian and bisexual" readership needs! No sponsors necessary and no having to pander to sponsors.