Stephannye Paola Castro Mora Was NOT Wearing Nor Forced to Wear a Dress!

A few nights ago Mrs Dirt asked if I had seen the copious Social Media cross postings from STRAIGHTBIANS everywhere about the lesbian forced to wear a dress then murdered. (Apparently the victim did not like nor own dresses.) I had not. She then showed me a blog post and various conversations on several different Social Media platforms. Like her, the whole forced to wear a dress thing seemed WWWWWWWWWWWAAAAAAAAAAAYYYYYYYYYYYYYYYYY out there to me! I mean, the logistics alone! But as it was right before bed, the conversation was left till we could both delve further.

Yesterday when I had more time I did indeed check further, and found out immediately that Mrs Dirt was in fact exactly right, the victim (Stephannye Paola Castro Mora) had not been forced to wear a dress then murdered/butchered. The clothing found near her torso (Miss Mora had been dismembered) were her own clothes (shirt/shorts).

While Miss Mora's murder is an absolute horror and a tragedy from which her loved ones will forever grieve, it was puzzling how such a bizarre inaccuracy (forced to wear a dress) came about and then taken on a whole new life (if you will) of its own. Being curious as to how such a CRAZY prevarication came about, I checked a little further in the stories surrounding Miss Mora's death.

The first reports of an unidentified female body/parts were on Nov. 7th 2018: 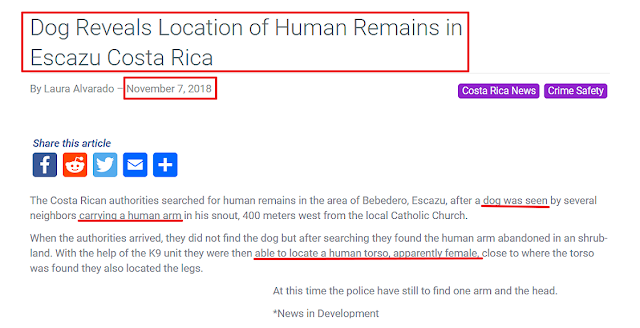 No mention of clothing, dresses or anything else. The victim was identified the next day, Nov. 8th 2018:

On Nov. 9th there is an article that mentions "women's clothing", this was likely extrapolated from police the day prior when trying to identify the victim, gave a brief description of her clothes as a blouse and shorts. The police who see a female torso arent trying to trace which section of a clothing store the victim purchased their clothes in, the men's section or the women's. They are giving a basic description to the public of what was found with the victim for the purpose of identification. Also first mentioned in this article (but far from the last) Miss Mora's association with Teresa Mendoza. 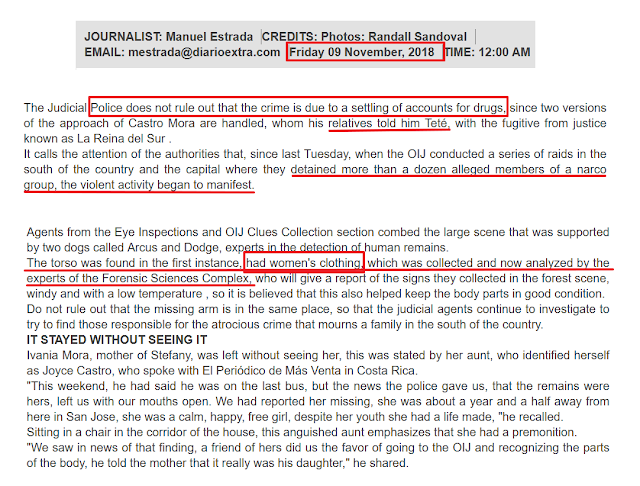 It seems from this point things quickly snowball and on Nov. 13th 2018, a congress woman makes a public statement that Miss Mora was put in a dress before being murdered in order to humiliate her: 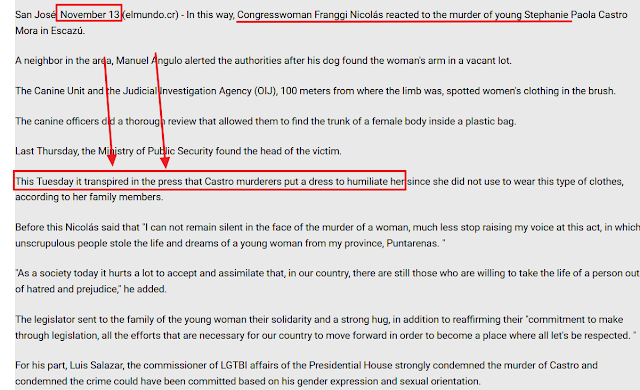 One would suspect that the dress thing/Lezbophobia/hate crime slant was generated as much by Miss Mora's family as idiots on Social Media. Her family no doubt preferred the hate crime scenario to the drug dealing one: 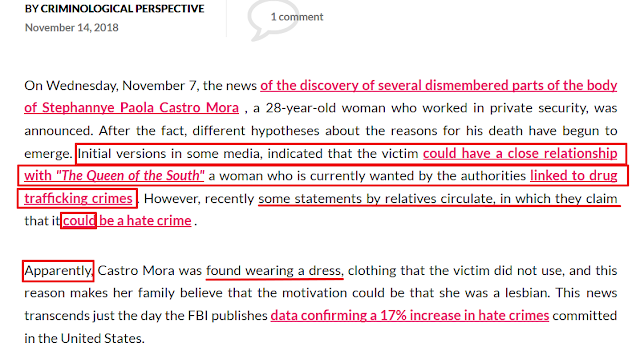 At this point the police further clarify that Miss Mora was NOT wearing a dress: 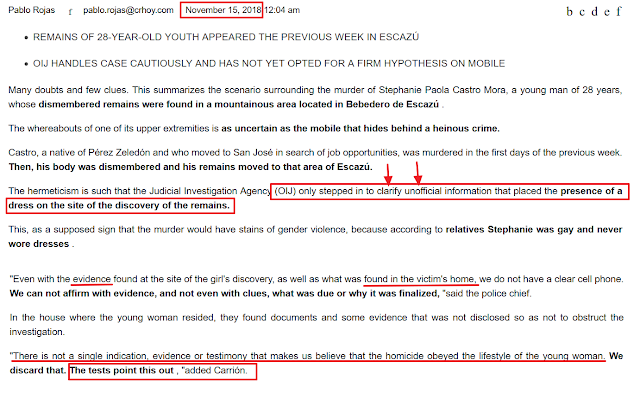 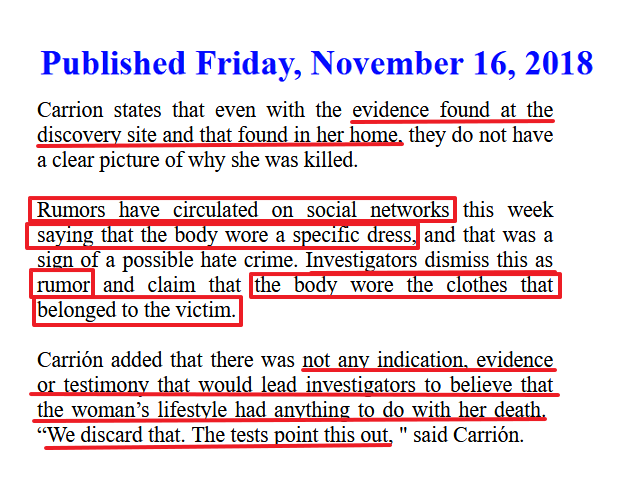 Clearly the police have gathered sufficient evidence from Miss Mora's home that ruled out her being murdered over her sexual relations or fashion sense. Her missing cell phone continues to be a much desired piece of evidence the police are VERY interested in. 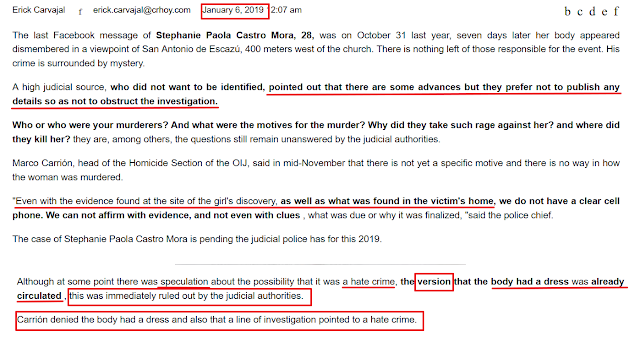 It is pretty clear, with just the least bit of minimal effort to discover that Miss Mora was NOT in fact wearing a dress when her torso was discovered, nor forced to wear a dress then executed.


THERE WAS NO DRESS!

So why are literally hundreds of US and UK Radical Feminists and STRAIGHTBIANS alike desperately clinging to this warped, demented and incorrect metastasized fabrication? Why has frenzied hysterics trumped all sense of reason and common sense with these women? Do they actually believe some man or men decided to find a woman they thought was a lesbian, kidnap her, measure her and then go to a women's clothing shop, pick out a dress, bring it back to wherever they are keeping her, point a gun to her head and say "put the dress on or die bitch"? (Most Dykes would die, lets be real) Then stand around her and laugh, then put a bullet in her head, dismember her and toss her body parts across town? Get fucking real!

In the entire history of Lesbians, this lunatic scenario has NEVER happened. Why do these Het women need this woman to be more of a victim than she already is? Why do they (Het women) need her to be a lesbian humiliated and victimized by patriarchy? Because victimization is the only way Het women (STRAIGHTBIAN or otherwise) can identify with a presumed lesbian?