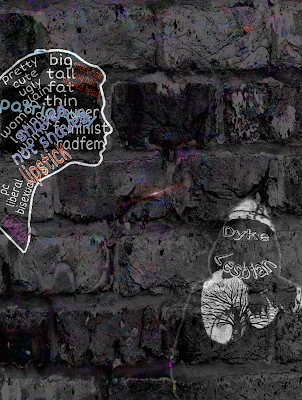 I stated in my last post that Lesbians (and by Lesbians I do not mean STRAIGHTBIANS) have not been in the past, nor are in the present, being coerced/raped by male trans. That does not mean that Lesbians past and present do not deal with heavy pressure/coercion to date women we are not interested in dating. This is an area both Mrs Dirt and I, and Lesbian friends have FIRST hand experience with. Experiences that date prior to the internet and most certainly since the age of global communication.

Believe it or not, both Mrs Dirt and I were once young, shy, naive Lesbians. In those youthful (late teens/early adulthood) exuberance's to meet/friend and perhaps date other Lesbians, we went outside our perspective comfort zones and along with respective Lesbian friends doing much the same; we at different times and different places together, found the same unwelcoming, strange and strangely aggressive/offensive "lesbian" grounds the country over. Hindsight leaves all Lesbians remembering those feelings of going to a "lesbian" event or "lesbian" bar and feeling like you have just purchased a candy bar only to find once you removed the wrapper it is instead a block of wood! Later online experiences would figure similarly.

Besides the strong feelings of continued alienation amid or at "lesbian" events/places, we Lesbians also encountered strong warped ideas held by whom we now know to be STRAIGHTBIANS; that "lesbians" do not/should not "discriminate" against any woman who fancies us BECAUSE that would be "acting like men"! According to "lesbian" (STRAIGHTBIAN) gospel, patriarchy owns the male gaze that decides how women are attractive, when women are attractive and who among women are attractive. "Lesbian" (STRAIGHTBIANS) instead center women in their lives, are women loving women (womyn), do not  "objectify" women yadda yadda yadda. Which is ironic since Het women (which obviously includes STRAIGHTBIANS) are the most mammoth criminals of judging/cutting down/dissecting other women. But thats another post!

Prior to the internet, good intentioned Lesbians (like ourselves) who ventured into "lesbian-feminist" groups/book clubs/Potlucks/etc were usually met (despite different times/places in the world) with a range of puke-faced disdain, revulsion, anger, opposition and outright hostility (resulting in a collective permafrost shoulder) for calling out/pointing out such blatant discrepancies as mentioned above, or when trying to elicit a plan of action for whatever the current feminist issue of the moment was. Het women, regardless of the sex they are dating, are usually indirect as a missile without a homing device (but equally deadly) would rarely be clear or directly confrontational toward us menacing Lesbians

Internet "lesbian feminist" (STRAIGHTBIAN) forums/spaces were (are) brimming over with verbose
circumlocutory (do you see the pattern?) screed screamed at any Lesbian who dares to fall in love with someone she is shares an attraction with. Lesbians are hit with hefty pressures to date women/womyn/wimmin we have no attraction to. I personally had been involved in shitstorms exchanges arguing for the full agency of Lesbians to date ONLY those to whom we are attracted! Why a STRAIGHTBIAN would want to date someone who has zero interest in them is clearly beyond me, but regardless of their neurosis, Lesbians do NOT have to join them in their nutfuck neverever-womyn-loving-womyn-lands!

Lesbians were and are flat out, full on pressured to date any/every unbalanced STRAIGHTBIAN (hmm unbalanced STRAIGHTBIAN? pardon my redundancy!) who shows us the faintest of interest. And if a Lesbian does not reciprocate that interest, we have been labeled any and all of the following:
Those labels and more being used in effort to PRESSURE Lesbians to date Het women we have no interest in. In my vast personal experience, I am happy to say most Lesbians stayed the course and dated who they liked. But unfortunately, I personally witnessed slews and slews of STRAIGHTBIANS who fell prey to the pressures of other STRAIGHTBIANS; partner with women whom they were not truly attracted (they are straight after all). Straight women in general worry a great deal about what other women think, STRAIGHTBIANS are no exception. These women ended up in relationships that resulted in unhappiness, unfulfillment, confusion, emotional abusiveness, physical abusiveness, pronoun changes, name changes, cross sex hormone changes, top surgery, bottom surgery, financial devastation, job loss, home loss, possession loss etc!

I find it both convenient and ironic that amid the torrential social media storms regarding lesbians-being-pressured-to-accept-dick, not one woman has mentioned these very real pressures on very real Lesbians! But I guess to discuss this topic, you might actually have to at least KNOW a Lesbian! As opposed to knowing only the STRAIGHTBIANS peddling this gibberish.

Lesbians are born a minority. There will always be more of them than us. Our biological nature has equipped us with grit, fortitude and mettle. All working together to keep our trees from bending to the winds and whims of Heterosexuality. Those weighty winds have lost all of us some leaves or even small branch or two, but our stalwart trunk remains strong and our roots deep.