Lesbians are NOT being forced to CockHold-but Radical Feminists Need Us to be!

Due to lengthy dual points I am going to make for this subject, this will be a two part post. 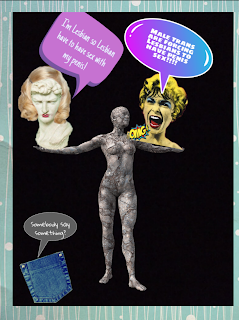 These days it is almost impossible not to run across an idiotic article, tweet or Facebook share without seeing some STRAIGHTBIAN or RadFem STRAIGHTBIAN ranting and raving that Lesbians are being coerced or forced (raped) to have sex with penis intact male trans. Stressing, highlighting and perseverating on the penis aspect, forgetting or ignoring, the obvious MALE biology with or without dick. In truth, there is not a single case of a Lesbian having been coerced or forced (raped) by a male trans, dicked or dickless.

Aside from strident Radfems routinely harassing male trans via playing out their emotionally thwarted brainsick boy/girl schoolyard games, and prior to cross-sex hormones altering Het male trans sexual inclinations toward other men; for sure some male trans are getting off by getting the goats of Radfems/RadFem ilk by turning the inclusion/exclusion tables. But it is clearly nothing more than wanton sensationalism, by both Radfems/various other STRAIGHTBIAN types and male trans. In other words, the story behind the headlines is just that, a story!

STRAIGHTBIANS using this line of attention seeking victim mongering aren't even actual victims of male trans. The Lesbian community these Hets women are claiming is under fire/at war with/under siege from by male trans, doesn't exist, nor has ever existed. While Het male trans retain attraction to women before cross-sex hormone changes take hold, let's be honest, it isn't Lesbians they are fantasizing about having a naked pillow fight with. Heck it isn't even the Radfems or other STRAIGHTBIAN types who have eschewed femininity. It's the hyper Het sexual male fantasies of girl on girl porn. I think it's fair to say the DalyDworkinites are pretty (or not) effin safe from the lustful eye AND peni of the male trans.

That being said, that being LESBIANS ARE NOT BEING COERCED OR FORCED INTO HAVING SEX WITH MALE TRANS! And the ONLY women saying that we are, are WOMEN! (ie HETEROSEXUALS)

So the real question is, why do Radical Feminist STRAIGHTBIANS NEED to proclaim, preach and proselytize the IDEA that Lesbians are being coerced/forced into sex with male trans? I think the answer lies in the complete and utter failure of Radical Feminism and it's collusion with pedophile John Money's Gender Identity theories. Get rid of constructed (lol) gender and Het women will be equal with men/the brain has no gender. A match made in Hell.

Male trans were smart to adopt that exactly line of thinking, and despite forty some odd years of RadFems meekly/weakly trying to fend off male trans advances, they have instead been beaten at their own game. It wasn't Mary Daly as Woman of the year, it was Bruce Jenner. Radfems cheered Billie Jean's battle of the sexes win against Riggs, but today cry foul play as male trans enter women's sports and win win win. (For the record, we obviously do not agree males should be allowed to complete against females in sports. But we also never believed or pretended males weren't physically by and large stronger than females of similar build.)

Like there suffragette sisters before them, when all their efforts failed to garner women the vote, suffragettes fell back on female victimhood whereby liberal males took up their cause ensuring it's approval. Radfems have repackaged Lesbian (Lesbian has been used by Radfems as a vehicle for their Het women anger toward men) as minority female victimhood (minority being status they cannot use any other way as most are them white). Poor Lesbians are being coerced/forced to have icky straight people sex with male trans cock and idiot liberal men like a Graham Linehan for example are fighting the fight weak Radfems/STRAIGHTBIANS cannot fight themselves.

At least the right to vote was something real and tangible, Lesbians forced to fuck males isn't real at all. Lesbians forced to fuck men is the mental spawn of damaged Het women under Radical Feminism. And frankly if by some glitch in the universe some male trans were too hit on a Dyke, make no fucking bones about it, a Dyke would have ZERO problem saying NO, no matter what name he called us!

It's pretty pathetic that given the majority numbers of Radfems/STRAIGHTBIANS etc, given the years they have been flapping their jaws, and given the minority number of male trans, given the five years male trans have had opportunities in larger society; this seemingly uneven matched battle of the sexes so far is being dominated by the men.

As for Lesbians, none of the above has ever been our fight. We have always been paid equal work for equal pay. We have always worked for what we have. We have always existed in the back pockets of the world. And we will continue to flower in our own soil out of sight in plain sight.

Mrs Dirt and I will continue to unSTRAIGHTen Lesbian from the opportunistic hands of STRAIGHTBIANS everywhere.