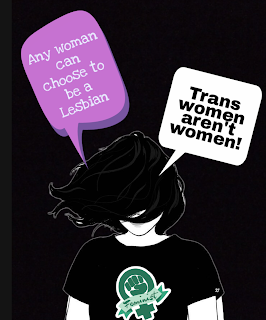 Previously, we have pointed out the double-blind-opposite-sides-of-the-same-coiness between RadFems and Trans persons; today we will delve deeper into the first of many ways Radical Feminists display willful-obtuse-obstinate-Het-privileged-egocentric-illogical disconnect between their own strongly held tenets of faith. Bear in mind, these examples are only a drop in the bucket of an otherwise ocean of idiocy.

Radical Feminist claim 1A: Trans women arent women (meaning males cannot choose to become females). This ad nauseum, poorly worded refrain has been running through RadFem circle jerks for at least forty years. Despite its ubiquitousness each and every time it is uttered on social media/academia it is treated like the discovery of gold amongst beggars.

Radical Feminist conflicting claim 1B: Any woman can choose to become a Lesbian. Equally vomitous and equally plethoric on/in social media/academia; this bullshit claim is the hallmark of Radical Feminism/STRAIGHTBIANISM everywhere.

Next example in a few days. Stay tuned.