What if Homosexuality wasnt biological?... 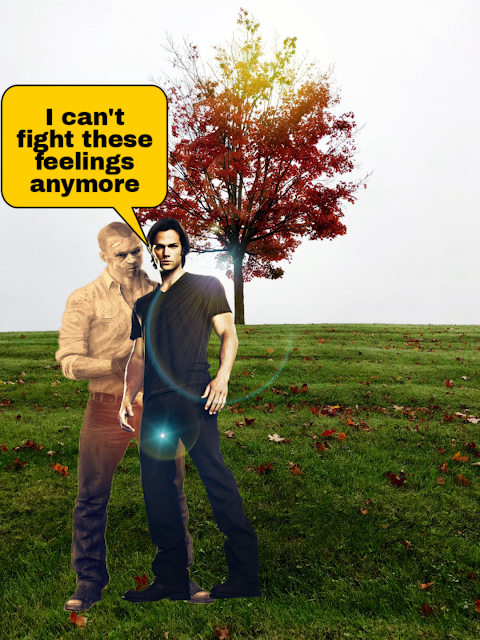 As Monday morning rolled around, Joe got up and showered, feeling a combination of anxiousness and excitement. The department Joe heads was to begin a joint project with the 4th floor department, and if everything were to go well, this would mean a big promotion for Joe. Joe's wife was already making plans for a celebration party, as she was sure like all of Joe's past successes, he would also see this project through, up another rung up on the corporate ladder.

Joe studied himself in the mirror for several moments after had showered and shaved, thinking to himself "I might not look like the captain of a high school football team, but I look damn good for a 36 year old guy"! He chuckled at this thought, when his wife interrupted "what are you smirking at"? "Oh nothing, honey". Joe finished getting dressed, kissed his wife goodbye and said he'd grab a coffee on the way in, because he wanted to be early to go over a few things before the big meeting. Joe felt a stirring in his downstairs from his wife's kiss, he wished he had had more time to ravish his very sexy wife, but hey, duty calls!

Later, Joe felt great at how well the meeting had progressed. Tim, who was the 4th floor's department head, really knew his stuff, and Joe was impressed. He had only seen Tim on the elevator and at a few work functions with his wife, so he really saw Tim in a new light during this joint project. Joe was glad things seemed so easy with Tim, Joe knew the better he and Tim worked together, the better their team would function, ensuring their projects success AND Joe's promotion!

Because Joe and Tim worked so well together, they actually shaved a full week off their deadline, although both put in their share of late nights. As the project started coming to a close, Joe felt a kind of uneasiness. He wasnt sure why, since its end would mean an end to late nights and high stress and the beginning of a promotion. But, nonetheless, Joe felt odd or off. He wasnt sure exactly what he was feeling or why. Joe's wife even noticed something was wrong. She asked Joe "For the last seven weeks you have come home excited and full of energy and now the projects done you seem depressed. Whats going on"? Joe shook his head, "oh nothing", "guess all the hours and stress have finally caught up to me".

A week past and Joe couldnt stop thinking about how much fun it was working with Tim. He felt like no matter what he said to Tim, Tim understood him exactly. It felt so wonderful to talk with someone about his career passions, his deep love of football, and his complaints about women, particularly his wife. Joe loved his wife dearly, but did she ever really understand him, his feelings, his dreams? Sometimes Joe felt like he was more of a paycheck to her than a husband.

Before he could think further, the phone rang. Joe reached in his pants pocket for his phone. A huge surge of butterflies rushed through his belly when he saw the caller ID, it was Tim! Joe nervously answered, thinking Tim was surely calling about work. He felt his voice tremble "Helllllooo".

After work, Joe nervously waited at the bar where Tim had asked Joe to meet him. The bar was downtown, near work. It was a nice upscale bar, with an equally nice hotel atop it. Joe checked his phone again for the time,seeing that Tim was 5 minutes late. Joe's stomach began sinking when he heard a voice behind him "hey buddy, sorry I'm late, I couldnt find a parking spot to save my life"! Joe muttered "no problem Tim, this is a great bar"..."have you been here before"? Tim said he had been to a bachelor party there the previous year for an old college friend.

After several beers, Tim looked into Joe's big brown eyes and said exactly what Joe has been feeling for weeks "I dont know how else to say this than to just say it"..."Joe, I cant stop thinking about you"! Joe felt like the weight of the world had been lifted off his shoulders, "oh my god Tim, I have been so down since we stopped working together"!..."I dont really know whats going on Tim, but I know my life hasnt felt more right than when we've worked together"! Joe felt shocked that these words were actually coming out of his mouth! He wondered for a minute was someone else inside him talking for him? Tim said "I know exactly how you feel Joe"...."I keep telling myself this is crazy and I'm a happily married STRAIGHT man"..."and then I think of you"...Tim's voice trailed off as he starred into Joe's eyes. Joe asked the bartender for the check.

Joe and Tim road silently up the elevator to the room Joe booked for them. Joe slid the key card to the door of their room, letting Tim enter first. Joe looked for the light switch while Tim found the minibar making them both a strong drink. As Joe took the drink Tim made, he told Tim "I've never done this before Tim, not with a man". Tim nodded "Neither have I buddy, neither have I". Joe continued "and I dont mean just sex, Tim, I mean I've never had these kinds of feelings for another man, never"! They both quickly drank their drink, undressed themselves when Joe said "I'm not even sure what to do"....Tim kissed him saying "love is love" while their mutual passions washed over them like a warm waterfall!

The moral of the story? Were SEXuality actually fluid, it wouldnt simply be Radical Feminist/sexually abused Het female/special snowflake STRAIGHTBIANS etc. that were suddenly "BECOMING Lesbians"; it would be our fathers, uncles, butchers, plumber's-butt plumbers etc. suddenly "BECOMING gay men"! And, by the same token, it would also mean biological Homosexuals would equally suddenly "BECOME straight". The moral of this story, the story of a hollow, futile, randomness, whereby biology has NO meaning, despite endless proofs of the laws of nature to the contrary? Ludicrous.