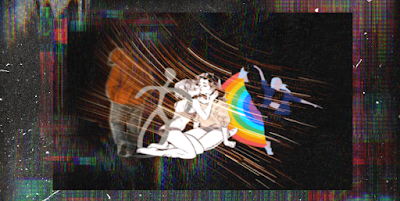 In the course of half a century of life experiences, Homosexual biology, years of daily acute discussions, rigorous (ongoing) research, all adjudicating in an amalgam of truths; both Mrs Dirt and I are (in the pursuit of truth) redressing some past presumptions. Presumptions that were made due to general Hetsplainations of Lesbian, centuries past and specifically due to STRAIGHTBIAN Hetsplaining, decades prior (thru current) to now.

STRAIGHTBIANS as we have shown in post after post of UnSTRAIGHTening Lesbian, who had the Het privilege/biology to communicate to whole swathes of the public and the ability to be understood/taken seriously by Het public and academic circles. STRAIGHTBIANS who in varying ways DICKtated:
But unfortunately actual Lesbians (which is the ONLY Lesbians) didnt know the above were all prevarications and fallacies we needed to guard against rather than accept or worse embrace, despite the uncomfortableness.

Popular dyke STRAIGHTBIAN culture taught us that every or near every mohawked/Doc Martin wearing/dangly ear ringed/body modified/tattoo sleeved/women's studies professor/drum circle beater/pink-purple-orange-blue haired/pro abortionist/take back the nighter/BDSM scener/I kissed a girl liked it and want to do it againers all went to make the "lesbian community". A STRAIGHTBIAN construct, very much like feminist's patriarchy, it simply does not exist. Granted there are pockets of Dykes in any given area at any given time. But small pockets of Dykes arent exactly DICKtating popular STRAIGHTBIAN prattle, formulating life long careers out of Heterocetric bullshit/thin air or worrying their mind over the rights/wrongs of penis in vagina sex!

STRAIGHTBIAN conceived/driven Queer Theory (a theory of a theory whereby STRAIGHTBIANS put their cart before their horse via signifiers; or simply, the clothes etc make the man/woman/homo/lesbian) was a Radical Feminists offspring that sprang from Radical Feminism's adoption of pedophile/sexologist John Money's Gender Identity Theory (sex is irrelevant/gender is a construct Patriarchy created to keep women down-if women deconstruct/reconstruct Patriarchy's unequal gender constructs and everyone will be equal in all things). Queer Theory brought Radical Feminism/Gender Identity into the 80's entering first through academic ivory doors, later exiting through medical offices/operating rooms and medical incinerators.

Like many O RadFem STRAIGHTBIANS, these warped women also wrongly figured themselves first to be Lesbian, an idea metastasized by decades of Radical Feminist rubbish, queered by Queer Theory twaddle and determined, diagnosed, coerced, conscripted, fooled, flim-flammed and later cheered into transition by a Heterosexual Heterocentric Hetsplaining Homophobic psychiatric community (mirrored by society) that understood/believed/took at face value that all same sex SEX equals Homo/Lezbo (including men who like to spank their monkey in lady garb-talk bout queer!) and all Homos/Lezbos equals born in the wrong body/born wrong period (apparently brains are independent of body parts-who knew!).

All this to say, not only have/are STRAIGHTBIANS the visible face of all things Lesbian, they are also the dominant group of females  who transition. And as such, Mrs Dirt and I will be including Trans STRAIGHTBIANS in future unSTRAIGHTening Lesbian posts. Lesbians are not the emotionally weak/damaged/disturbed/warped women psychiatry/society has diagnosed, STRAIGHTBIANS are.