Last up in this group of unSTRAIGHTening Lesbian is Julie Bindel, a Radical Feminist/journalist. Like Julie's idol Sheila Jeffreys, we could literally use her quotes without comment and her Heterosexuality would (does) speaks for itself. BUT, not commenting on her Homophobia/Homosexual hatred (which she's made a near career out of) would be a disservice to  actual Homosexuals/Lesbians. 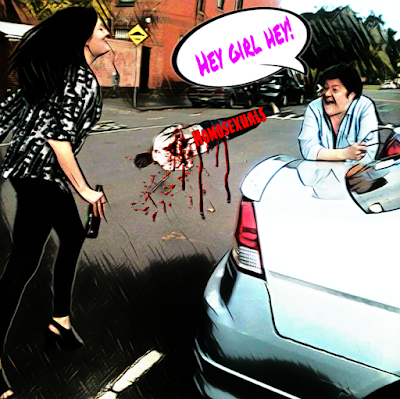 Since Bindel seems to love to hear herself talk, the quotes used for this post will come directly from interviews and an article written by Bindel alone, as stated above, nothing else was needed:

From an interview Bindel gave in 2015 to Feminist Current; when asked about how she became involved in the women's movement Bindel says: 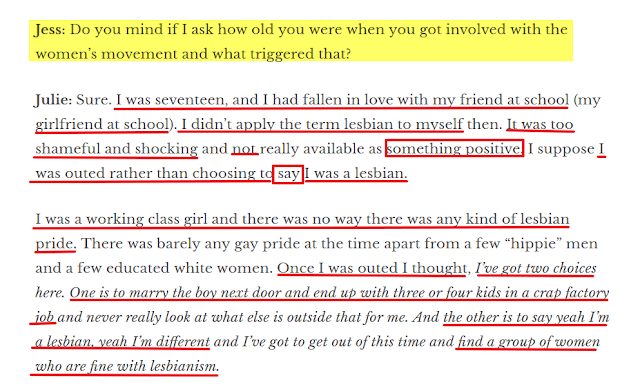 Like many RadFems we have unSTRAIGHTened, Bindel too despised (es) actual Lesbians and feared (being called)/calling herself a Lesbian because she did not want to be perceived the way SHE views actual Lesbians, i.e. too direct/too mannish/too brash/too ugly/too dykey etc. According to her she would not have even called herself a lesbian had she not been called one by a group of boys when she was 17 (or 16 or 15 or...her being "outed" is subject to change depending on her mood?). Being outed or coming out is another interesting RadFem experience. Because Bindel/RadFems are Heterosexual females, it is only through putting themselves in visibly intimate (not necessarily sexual) relations with other Het females or by actually shouting from rooftops that they are lesbian does anyone SEE them as Lesbian. By coming out themselves, these types of STRAIGHTBIANS can at least control how society views them (not with disgust like we are viewed). More on this later....

Another Heterosexual tell in this quote is Bindel saying that once she was outed she had a CHOICE to marry a man/have babies/work a shit job etc (clearly Bindel's classism and anti-feminism against other women who marry, have children and work a random job to help support the family they love is not a valid position), none of that has EVER been a choice for Lesbians, because Lesbian brain function isnt designed toward males or babies! 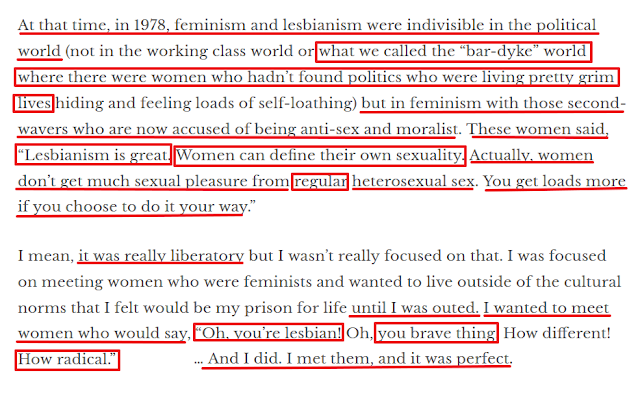 The above is from further into the interview and as you can read, Bindel's HOMOPHOBIA and classism of whom SHE perceives to be bar-dykes are over the fucking top! I suspect the only self loathing she perceived came from herself. Again Bindel didnt want to be viewed as a Lesbian UNLESS she could be seen as being radical and brave. The Lesbian sperm and Lesbian egg that meet to create a Lesbian life doesnt do so for glory, its simple biology and luck of the draw. Living a lie isnt radical or brave, but this is a lie RadFems deceive themselves with routinely.

The next few quotes comes from another interview Bindel did in 2015 in RadFem Collective: 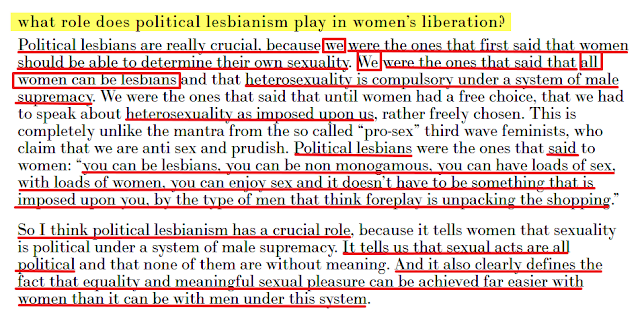 Lying about your very nature and having copious amounts of sex with copious amounts of women isnt political and it most certainly is NOT Lesbian! This is reminiscent of American political lesbians STRAIGHTBIANS who boasted of the daisy chains of Het female lovers they had all across America! Is it any wonder why Homosexuals are perceived to be so sex obsessed! The Heterosexuals like Bindel calling themselves some form of Homosexual are the sex obsessed! And not that I truly care what the religious right thinks about me/Lesbians, but I/we DO care when what they (voters) think/ the images they hold of us, have been driven by fucked up HETEROSEXUAL women! Like trying to adopt a rescue CAT and my wife and I are asked where we sleep and refused said cat for being sick/immoral, or worse refused the right to rent a home for the same reasons and those reasons exist NOT because of ANYTHING any Lesbian has done BUT because of the warped Heterosexuality of fucked up STRAIGHTBIANS (political lesbians), THAT FUCKING MATTERS!

No person born Homosexual can help it, that isnt an excuse, its pure biology and were it not for idiot Heterosexuals, it would be common sense! Bindel's ignorance and hatred of Homosexual men is excessive and bleeds into many other interviews/writings. One has to wonder has she ever met a gay man. I read this and a few other things from Bindel to my brother and his husband and they were as perplexed as they were shocked and disgusted by her ignorance and Homophobia. I can only presume Bindel has read too much Califia/Rubin, two other STRAIGHTBIANS Julie; you notice those things when you're actually a Dyke!

This quote is purely for the shits and giggles, name me ONE Lesbian who in the HISTORY of Lesbians EVER asked another Lesbian if she had orgasms! This is however the nonsense that Het women blather about daily. And RadFems actually ponder why men beat them at nearly everything. Sheesh! 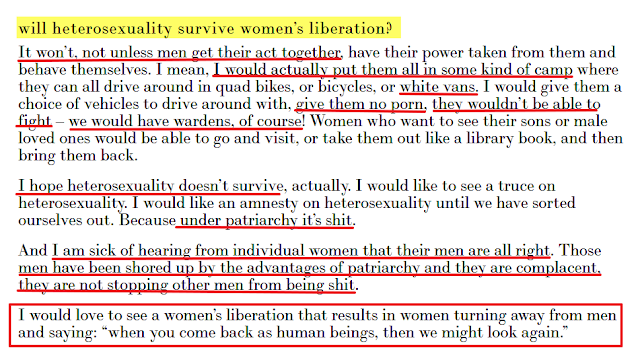 This is the unrealistic dream world many RadFems sadly live in. Heterosexual females will NEVER stop being attracted to men, loving men, putting up with men or putting men first in many cases. Human biology functions today just as it functioned 5000 years ago. Bindel claims to be radical and brave but here she is being as passive as the day is long, passivity being a prime Heterosexual female trait. How are women suppose to use Radical Feminism as a springboard for change when the very women running radical feminist outlets are inactive/passive and impotent? And btw Julie, Lesbians are not passive, we not only say, we do! One more thing if Julie would like to answer, hun why are these campy men ridding around on anything and why a white van as apposed to a red or green or purple one?

From an article Bindel wrote in 2014 in the NewStatesman: 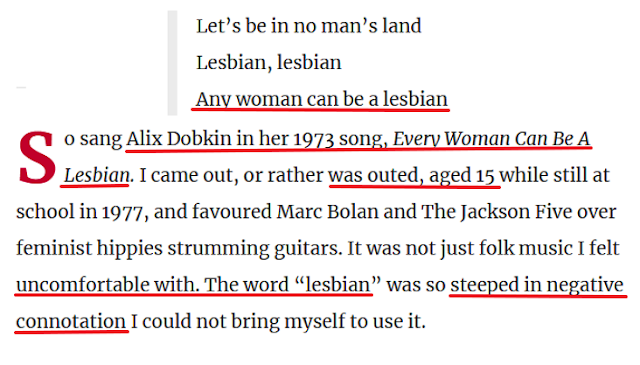 Clearly a RadFem refrain and favourite of Julie's...

Julie? I'm not sure if this is simply you not bothering to do your homework or a convenient RadFem spin, but the UK GLF; particularly Bob Mellors and Aubrey Walter, took their example from both the US GLF and the US Black Panther Movement. Also the manifesto you site was actually a much later version heavily penned by Het women. Women like you Julie, who were/are ONLY interested in separating biology from Homosexuality so you can be believable/acceptable as something you are not-Lesbian! Readers, this is a prime example of ways in which Radical Feminists have slanted Homosexual history to suit their special needs. Somewhere between Het privilege, pipe dream and abhorrent, abominable, detestable, loathsome, odious disgusting, repugnant, repulsive, revolting, revulsive, discreditable, disreputable, ignominious, shameful, low, shabby, sordid, squalid, vile, reprehensible, reproachable, cowardly, craven, dastardly, unethical, unprincipled, unscrupulous

Bindel has never met a Butch, let alone danced with one, as this comment clearly indicates. But I'm sure the STRAIGHTBIANS whom Bindel did dance with whom were calling themselves butch wouldnt be too happy to see (when Julie didnt need a dance partner) what Julie really thinks of them: Butch is so last year. This comes from a past Bindel article she wrote poking fun at a butch cookbook by Lee Lynch, Sue Hardesty and Nel Ward, all three obvious and known STRAIGHTBIANS. Bindel being a STRAIGHTBIAN as well, cannot tell a STRAIGHTBIAN from a Dyke as the above comment and the cited article make clear. 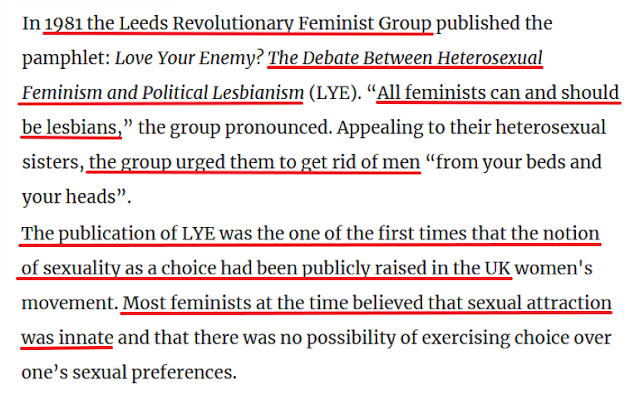 Bindel, along with many many many RadFems are notorious for calling out/calling attention to males whenever they coerce women into having sex with them, yet are completely silent about their decades long coercion of women into leaving their husbands/boyfriends and BECOME lesbians STRAIGHTBIANS! Where their is pressure and propaganda there cannot be choice, and RadFems will be the first to tell you choice is pivotal to feminism! Coercion however? Not feminist at all and most certainly NOT radical! 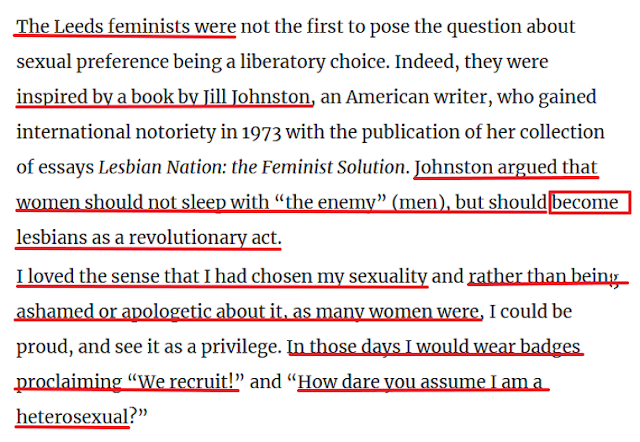 Jill Johnston Julie? Really? Jill Johnston was an admitted nutcase and Het woman, she was as sane as she was Lesbian, in other words she was neither. As mentioned earlier in this post, STRAIGHTBIANS are never flagged for being Lesbians, instead there has to be a concerted effort to get society (particularly men) to see them (RadFems) not wanting men by being seen as Lesbians! RadFems recruiting (coercing) other Het women into joining their faux lesbian groups wasnt enough, they needed men to SEE them eschewing men by wearing pseudo lesbian pins and staging dyke marches. Like all STRAIGHTBIAN sects, men are ALWAYS at the forefront of STRAIGHTBIAN's fantasies/fairy tales/preoccupations and politics. 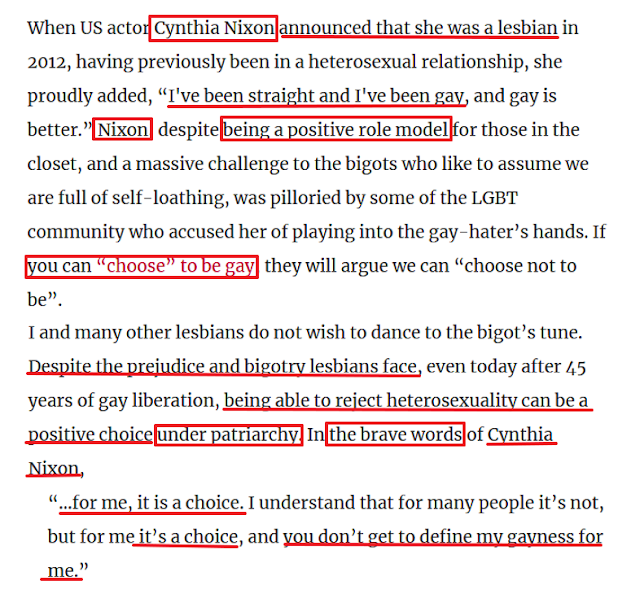 Bindel quoting STRAIGHTBIAN Cynthia Nixon takes the cake, it takes it and shits all over it and smears it on the faces of every Gay and Lesbian who has ever existed and will ever exist!

Julie Bindel despises Gays and Lesbians almost as much as she surely detests herself. Bindel complains about biological males using their power/numbers to don/redefine woman (mansplaining) but sees no problem with doing the same with Lesbian (hetsplaining). Julie Bindel has never been a Lesbian and therefore cannot be a Lesbian now. She is a privileged Heterosexual woman muddying and uglying Lesbian, giving false testimony to who and what Lesbian is and when WE (actual Lesbians) are refused a job, kicked out of our homes or worse, murdered in the streets Julie Bindel strides on by us like our bloodied bodies are messing up her perfect view (that is if she notices us at all)!