We begin our next set of unSTRAIGHTening Lesbians with the Sneaky Pie Lavender Menace to Lesbians herself Rita Mae Brown. If not familiar with Rita Mae, she was an early element in the Radical Feminist movement after she was more or less removed from Betty Friedan's National Organization of Women (NOW). The purported reason Rita Mae was ousted was because she claimed at the time to be a Lesbian. Through this ousting Rita Mae and other Lesbians STRAIGHTBIANS formed the RadFem group the Lavender Menace: 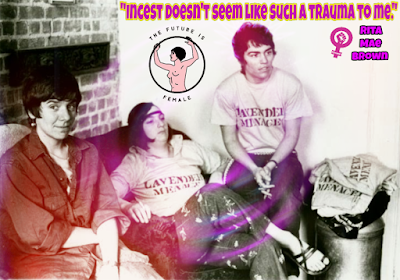 But it wasnt Rita Mae's libber angst that cloaked her in Lesbianism, it was her first novel Rubyfruit Jungle: 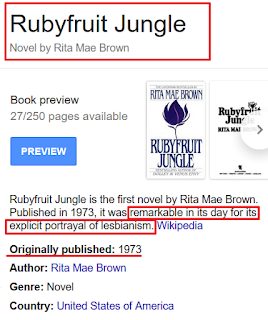 For making the primary point of these posts, (unSTRAIGHTening Lesbian) one really doesnt have to look beyond Rubyfruit Jungle. The novel rapidly begins with prime character Molly STRAIGHT away focusing on DICK, no not as in another character, as in a boy the young Molly exploits for profit using his uncircumcised penis in a show and tell: (Ah penis, something every young Dyke wants to see-think again honey!)

From there the novel speeds to Molly having sex with a straight female friend AND then her straight male cousin Leroy: 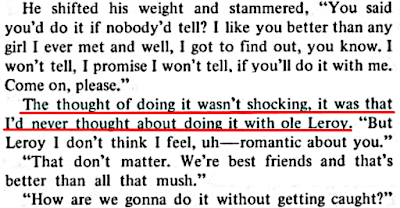 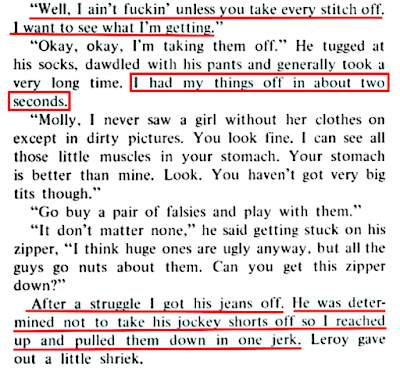 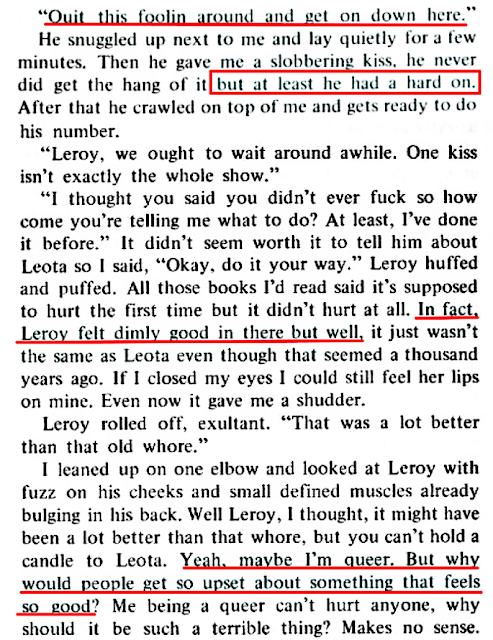 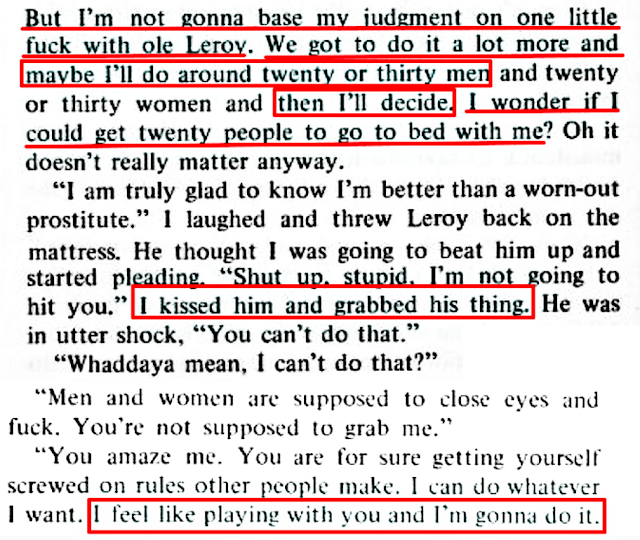 A sexual relationship young Molly repeats throughout her cohabitation with cousin Leroy/his family:

Molly struggles to outgrow her illegitimate hick background which both deeply troubles/embarrasses her by heading as soon as she can to the big city; New York. Once there we encounter Molly's first time at a gay bar with a gay male friend: 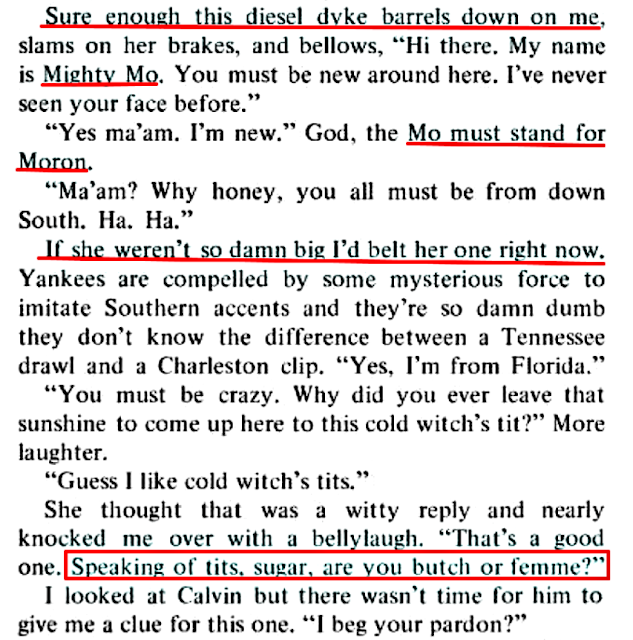 Its clear from this moment it isnt just Molly who knows nothing about Butch or Femme Lesbians, its Rita Mae for posing this question at all. 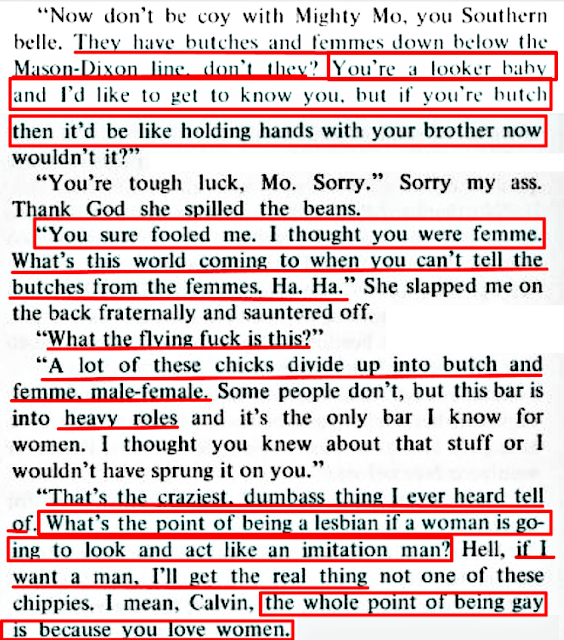 Rita Mae uses her novel to slam other STRAIGHTBIANS dominating the "lesbian" bar scene, damaged Het women who could only see relationships through their own Heterosexual nature; male or female. Mo was no more a Butch than Molly; everything, INCLUDING Lesbian, depended solely on what they claimed to be, not what they actually were. Rita Mae's snobbish STRAIGHTBIAN Molly places her own warped version of Lesbian (two attractive society approved straight women having sexual relations) above that of fat ugly STRAIGHTBIANS who portray/participate in Heterosexual mimicry. Moving on: 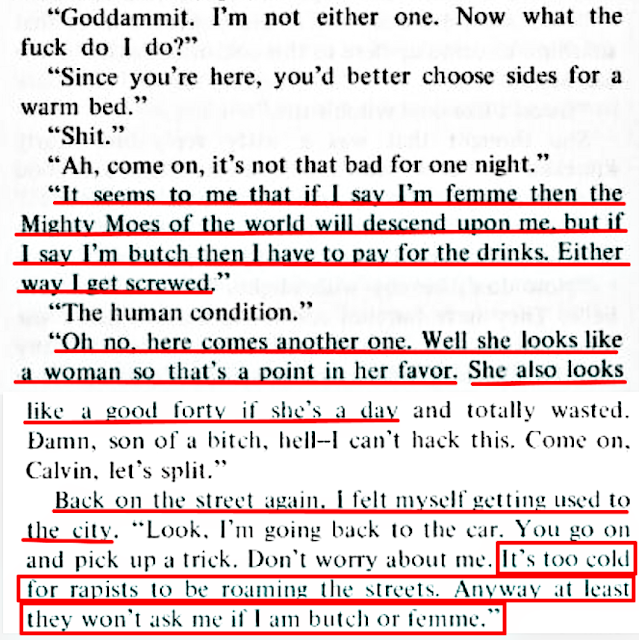 Rita Mae's Molly is so disgusted by the lesbians she encounters at the bar she jokingly would rather encounter a rapist than entertain the notion of sex with the bar lezzies. Molly thinks herself miles and morals above most, even while fucking a small family; mother, father and underage daughter (thank god they didnt have any pets!): 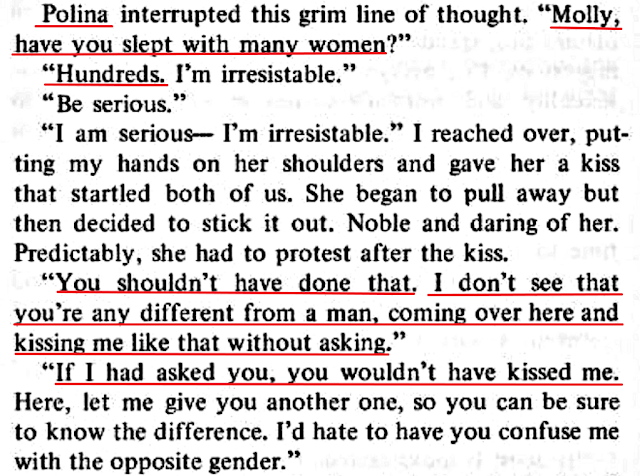 Given Molly's Hetero MALE mimicry (forcing herself on a woman/the woman's no equals yes) there was no surprise why Betty Friedan could no longer find a place for Rita Mae's Radical Feminism! 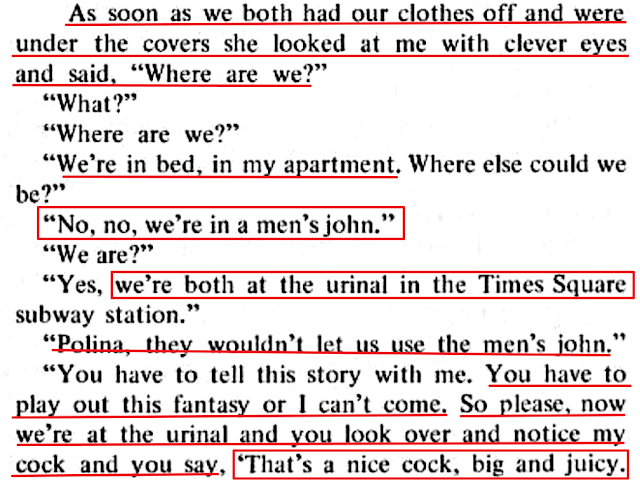 Polina turns the table on Molly and entices her to role play a game Polina and her husband play involving public urinal sex, only in this scenario Polina is the man to Molly's woman: 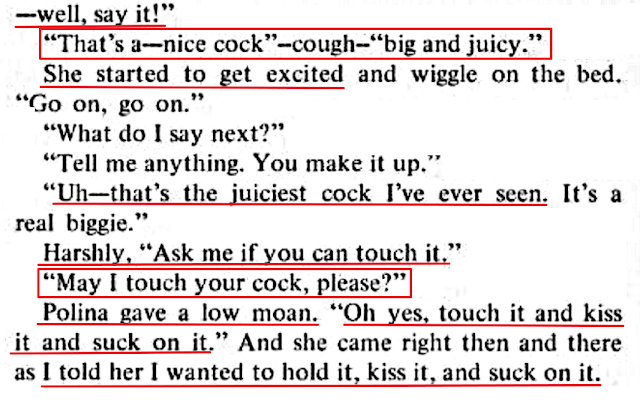 Molly then moves on to a date with Polina's husband, Molly figures by fucking Paul she can be closer to Polina, sound like any Lesbians you know? Me either! 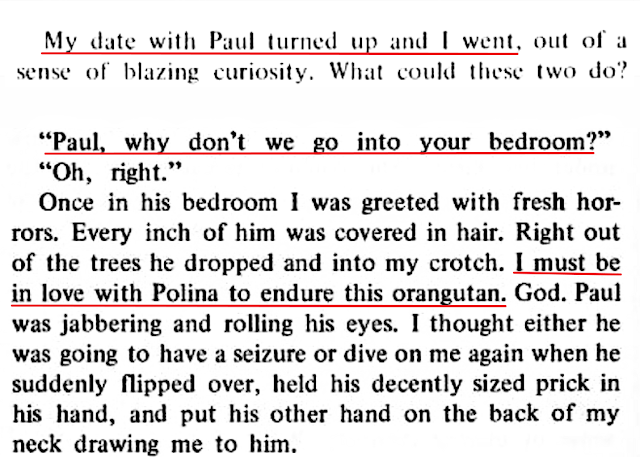 Molly then moves onto Polina and Paul's underage daughter: 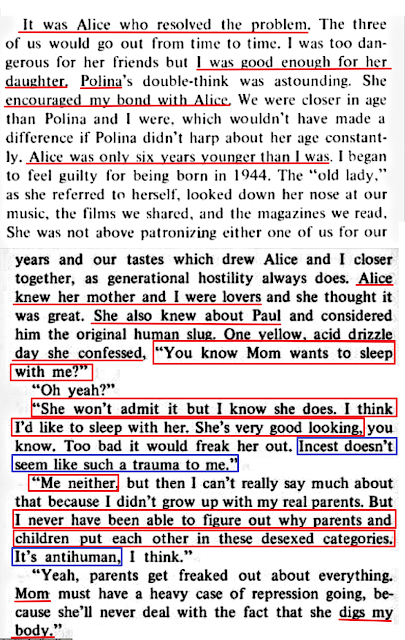 The dialogue for Alice wanting to have sex with her mother sounds eerily familiar, and Rita Mae's treatment of incest as untraumatic is the ONLY thing "antihuman" here! 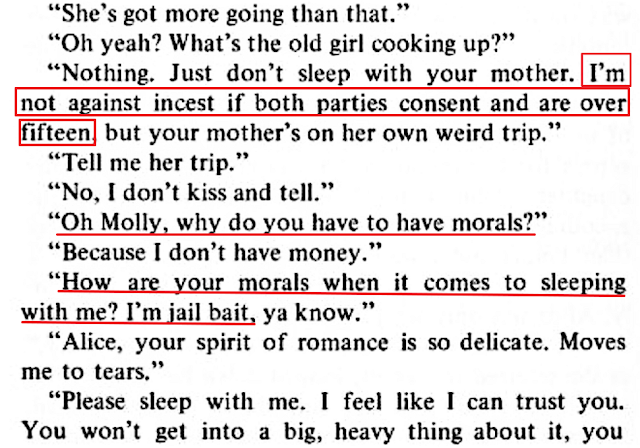 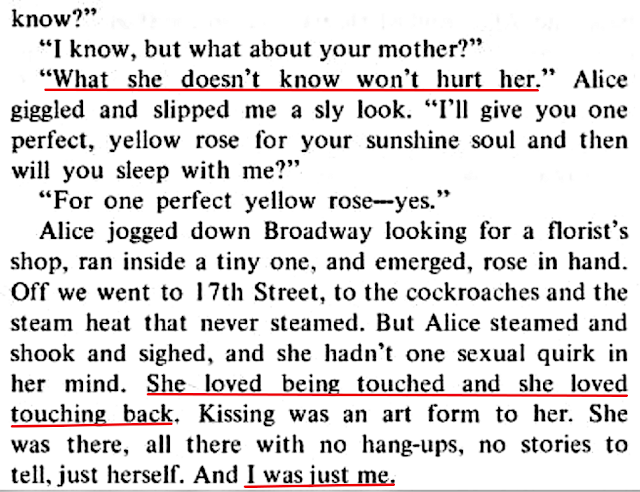 Molly says earlier in the novel of a similar fuckfest:

Rubyfruit Jungle sums up everything that is Lesbian about Rita Mae and Lesbian in the novel, NOTHING!

That didnt stop Rita Mae from giving advice to young suicidal Gays and Lesbians in her intro to: 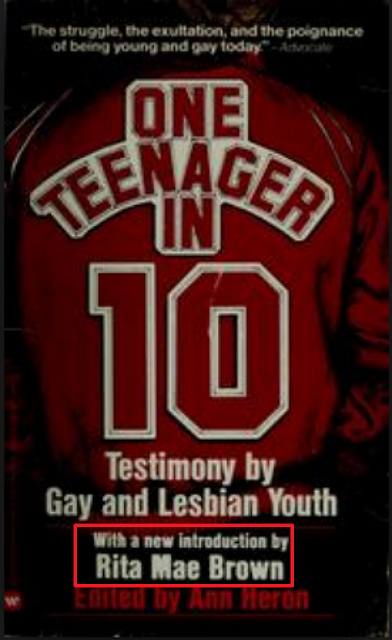 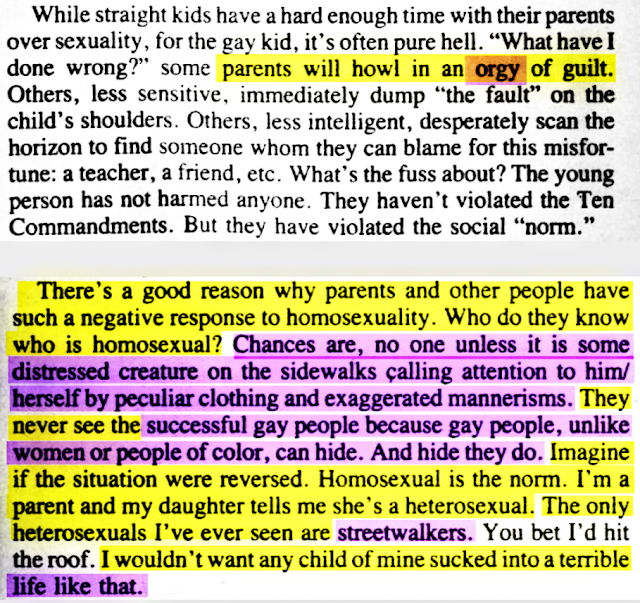 Rita Mae, like Molly from Rubyfruit Jungle, sees Homosexuals/and or STRAIGHTBIANS who are found in gay bars as warped, alcoholics and obsessed with their Homosexuality (or in the case of STRAIGHTBIANS, obsessed with their claim of Homosexuality). These people, Rita Mae tells young Gays and Lesbians, are life's LOSERS! Rita Mae blatantly states actual Homosexuals can simply cast off our natures and be like her (a pro incest, polygamous, bisexual)! 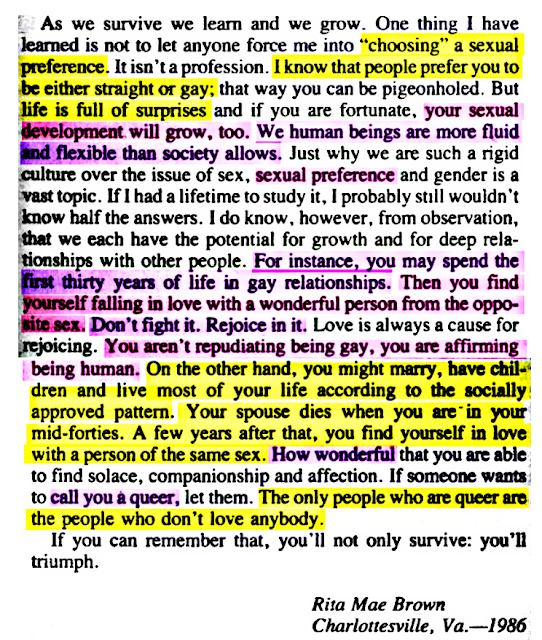 Rita Mae Brown by her own admission (when convenient) cast off calling herself a Lesbian, not because she wasnt (she clearly isnt) but because it was no longer profitable to her now mainstream Heterosexual female audience. Rita Mae hated and still hates labels:

Being a Lesbian isnt constricting or freeing and it mostly certainly isnt a sarcophagus burying us alive! Like many STRAIGHTBIANS, Rita Mae donned Lesbian like cross dressers don woman, Lesbian for Rita functioned as fetish, financial gain and fame.