One is not born, but rather is made, a STRAIGHTBIAN

I have written many years and many posts, but I dont recall ever having to begin a post with this:

If you are too sensitive/too close to child sexual abuse, do NOT read beyond this point. You are being warned!

Radical Feminists and other STRAIGHTBIANS who claim Lesbian, have long declared that there are many different ways that women come to living/identifying as (a) Lesbian. But whether dressed up in political rhetoric, draped in academic magniloquence or swathed in fishnets, short skirts and stumbling stilettos, the only lesbian they give birth to is both deformed and unrecognizable.

I do agree though, there are many different ways HETEROSEXUAL females come to think they are/want to be/need to be/desire to be/wish they were: Lesbian.

From Louise Armstrong's Kiss Daddy Goodnight, this is actually how millions upon millions of Het females came to/come to/will come to: Lesbian. For the sake of brevity I'm including only very relevant material, material that directly correlates to the principles of the STRAIGHTBIAN mind/STRAIGHTBIAN pathology. 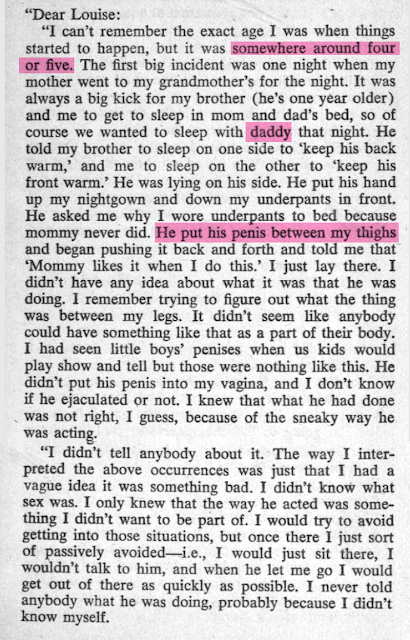 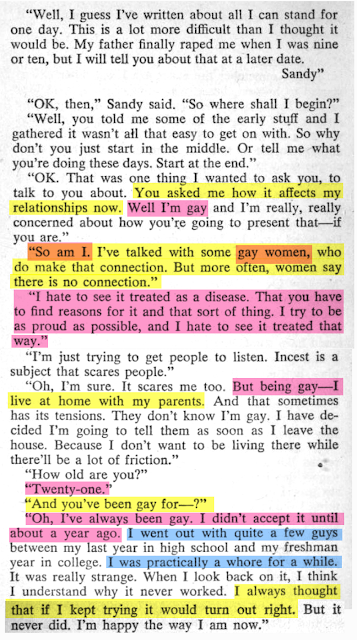 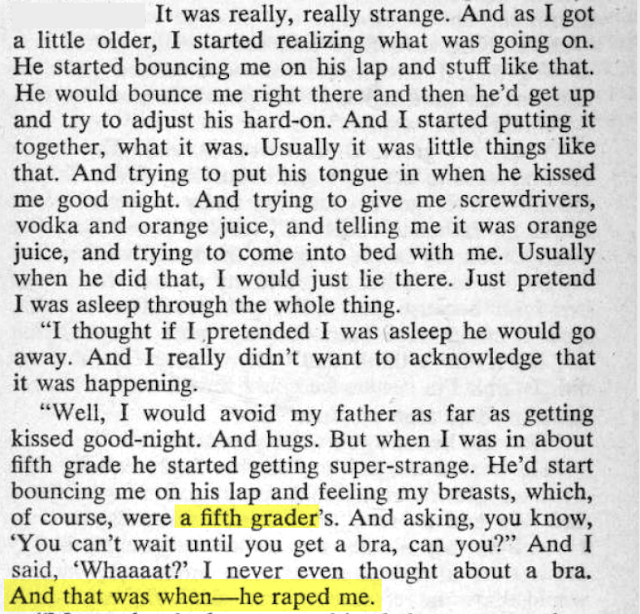 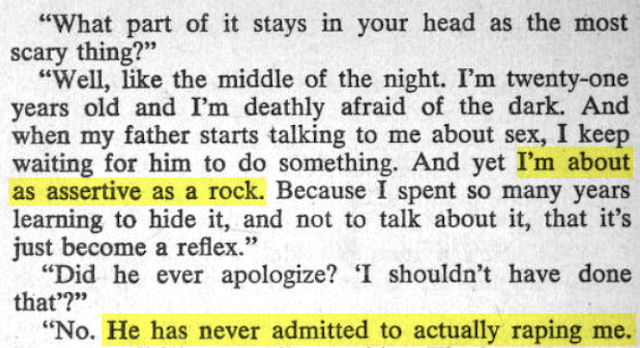 It is understandable why Sandy wanted to get off the dizzying Hetero merry-go-round, one her father sickeningly forced upon her from the time she was a child. But as a Lesbian it is offensive, her idea of "gay" (sexual abuse) was the thing she could bond with other "gay" women like herself over, not actually BEING a Lesbian (diseased). Her trepidation of coming around (not out) to "gay" was because Lesbianism was (is) viewed/treated as a pathology. A pathology sexually abused HETEROSEXUAL females like Sandy (not of their own volition of course) forged through psychological needs/diagnosis. Sandy even has the luxury of keeping her "gay"ness under wraps because as a young Het woman, lesbian for her is only behaviour (two females having sex), unlike actual Lesbians who cannot hide our bodies/mannerisms. STRAIGHTBIAN Sandy's make up many of the worlds RadFem/Feminist groups past, present and undoubtedly future. Many may be found fighting for abortion rights, sex trafficking, sex worker issues, sisterhood, womyncentric, violence against women, #me too etc. Sex will figure HIGHLY somewhere in their life, their brains were irrevocably altered the first time they were violated as little girls, any sexual violation that came after further disrupted normal Het female brain growth. 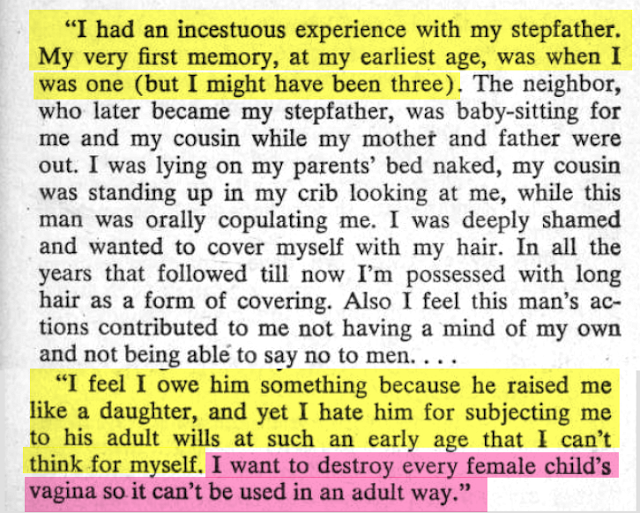 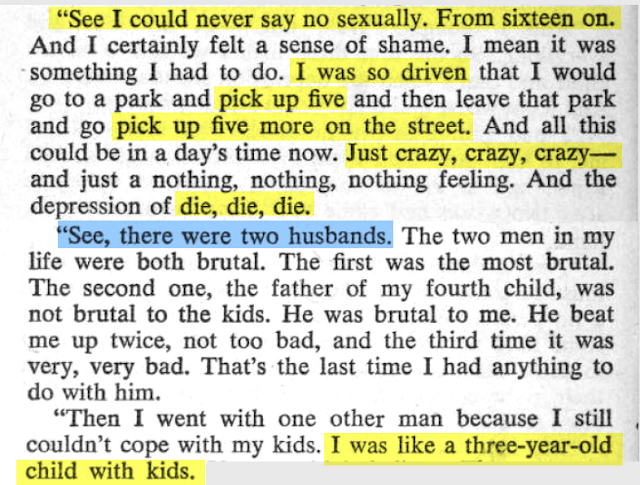 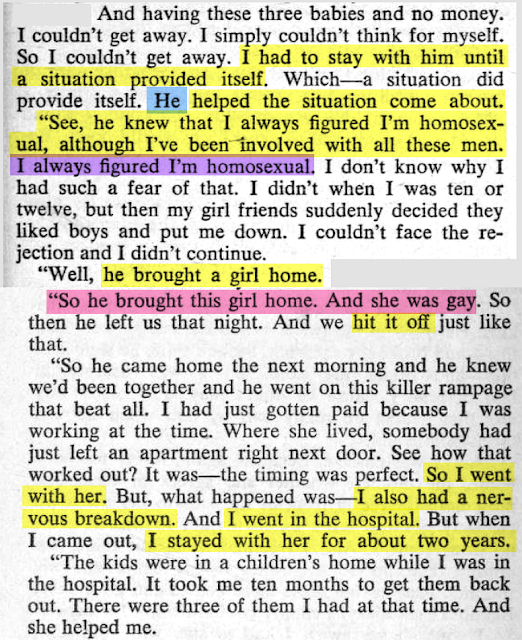 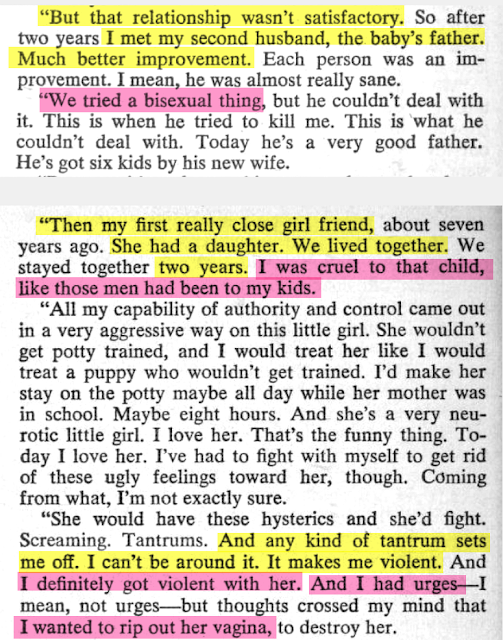 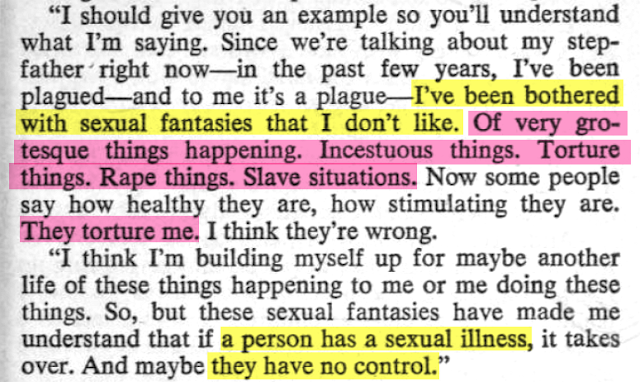 STRAIGHTBIANS like this woman are clearly some of the MOST dangerous, to themselves and to others, especially other females. Her pathology verges on the violent, her seething masochism warped and ready to sadistically harm any female child she has power over. Its unlikely a Lesbian would get involved with a STRAIGHTBIAN like this, but never say never. Its clear from her letter that the women she was involved with were also STRAIGHTBIANS. So while STRAIGHTBIANS with this sadistic pathology towards females (children) dont pose a real threat to Lesbians, most will wind up in mental health facilities (as did she) and will identify themselves/or be identified as Homosexual/Gay/Lesbian to psychiatric clinicians all too ready to maintain Lesbian as pathological/diseased. Further reinforcing Homosexuality as child molesting/sex obsessed freaks who should be locked up or put to death.

There is a great deal more horror stories in Louise's book, I chose the three for this post because we see so many STRAIGHTBIANS who grew out of similar horrors. Obviously the roads that led these women (women like them) to Lesbian are by no means the ONLY roads, but sadly child sexual abuse is the common denominator for STRAIGHTBIANS.

Despite years of systematic sexual abuse where one would think nothing intelligent, or good or beautiful can possible come out of that, there were/are many highly intelligent and talented (albeit tortured) STRAIGHTBIANS. One such example is the artist Jordie Hudson, who terrible beginning turned into a terrible end, and whom has haunted Mrs Dirt (particularly) since we witnessed her story on ID channel's See No Evil nearly two weeks ago. We will never see Jordie or any STRAIGHTBIAN as a Lesbian, but that doesnt mean either of us are blind. We see you Jordie and remember even amid the horrors of child sexual abuse, YOU showed us beauty exists and still blossoms. RIP Jordie Hudson