Sex and the STRAIGHTBIAN (Part 1) The Passion Is Political

We are closing this year out with a series of posts we've been asked by many Lesbians to write, and which we feel will be informative for the unSTRAIGHTening Lesbian series. 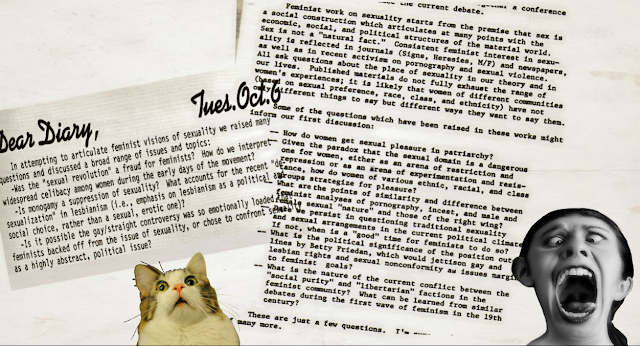 We havent written a great deal on STRAIGHTBIANS and sex, but where mentioned we have focused primarily on RadFem STRAIGHTBIANS whom (for varying reasons) eschew sex with men, and more often than not, eschew sex...period.

If you took a Women's Studies course or such, you will recall the great "lesbian sex wars" back in the late 70's/early 80's, those erring on the side of the anti-sex group consisted primarily of staunch RadFems. Het women who routinely patrolled other women's sexuality/sexual behaviours, quickly ousting dirty RadFems who preferred penetration to pussy licking or the preferable platonic love. But human nature being human nature, there are new generations of Het women who continue to fall into that RadFem anti-sex category. And depending on sexual abuses/temperament/dominant handedness/emotional baggage/education/politics etc a percentage of those Het women will seek out to date/partner with other (mostly Het) females.

These Het women will claim Lesbian, define Lesbian, publish books/articles as Lesbians/about Lesbian issues, and be professionally known as Lesbians, all the while being/thinking/functioning Heterosexual. They may don a short 'do, sport sensible shoes, and own a flannel shirt or two or three, an acceptable "lesbian" outfit that they believe says dont look at me, look at what I do. An outfit defined/created by RadFems before them, serving the same purpose.

These STRAIGHTBIANS usually do not know or associate with actual Lesbians, and when they encounter us, they quickly snub us. They believe they are intellectually superior to Lesbians (they believe they are gifted academics and perceive actual Lesbians to be Blue Collar/beneath them socially/morally/intellectually and therefore dismiss/despise any Dyke who dares to question THEIR hetsplained version of lesbian). These RadFem STRAIGHTBIANS also incorrectly perceive themselves to be ideologically/politically superior/cognizant to actual Lesbians (they CHOSE to be womyn centered and would not dare debase/objectify womyn with sex/sexual thoughts, which they believe is similar to the dreaded Male Gaze holding less fortunate females hostage everywhere).

These types of STRAIGHTBIANS chant, preach and promote the personal IS political, yet their entire political system springs from their own personal damaged pathology. A pathology not just rooted in the Heterosexual, it IS Heterosexual! BUT a Heterosexuality (at least where relations with males are concerned) THEY do not want! Unlike most Het females who naturally feel quite passionate (including romantic sometimes) with Het females in their lives, these STRAIGHTBIANS take these feelings to a whole other level, wrapping their pathology and warped political theories into romance with another female. Because their self proclaimed political reasons for their female romances usually dominate their lesbian relationships, sex usually takes a backseat or worse, the trunk (for you Brits-it gets put in the boot of the car). Attraction for these STRAIGHTBIANS is an attraction to the other person's politics, rather than raw passion itself. The passion is political, not the personal and depending on each Het woman's politics, that joint political may last years, decades or till death. BUT it isnt LESBIAN!

For STRAIGHTBIANS like this, sex is sublimated for politics.