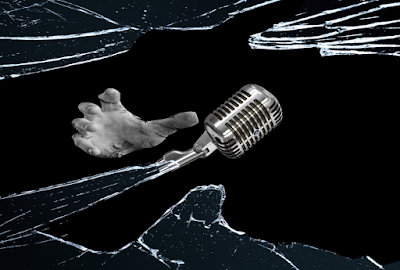 Since Mrs Dirt and I began unSTRAIGHTening Lesbian from the warped clutches of centuries of Hetsplaining, more and more Lesbians are finding their Lesbian voices. Voices speaking to experiences unique to ONLY Lesbians! Voices trying to communicate that uniqueness to each other through Fort Knox walls of Heterocentrism; defining and dominating ALL existences, including our own!

Like Lady MacBeth, Heterosexuals have unsuccessfully out damn spotted Homosexuals in an ongoing effort to rid the world of us/our presence/our legitimacy. I say unsuccessfully not for fear of trying, but because THEY (Hets) keep fucking and producing us! Every Homosexual with an iota of self awareness knows IF Hets ever figure our how to stop Homosexual births, we WILL quickly vanish from this planet. But I digress, for the MOMENT we are here, we are alive and we are our own NORMAL! That however doesnt stop Hets from co-opting/silencing us for their own special purposes.

Speaking Lesbian (yes-Lesbians do speak/communicate different than Hets) is been both a blessing and a curse. Speaking the same language differently allows Lesbians to KNOW they are speaking to a Lesbian, but it also means we are forever misunderstood by Hets (particularly Het females)! And being drowned by wave after wave of Heterocentricity while swimming in a sea of Heterosexuals means Lesbians are taught exclusively ONLY the language of Hets to communicate with. Raising the question, how effectively can Lesbians, even ponder our own existence when the language with which we are using to ponder, is HETEROSEXUAL???? I suspect it is precisely our Lesbian nuances to Heterosexual lingo that have created our Lesbian dialect. A dialect that sounds familiar enough to Hets, but comes in disjointed/strange/alien to them at the same time.

STRAIGHTBIANS however, are understood perfectly, because they are STRAIGHT! They think STRAIGHT. They look STRAIGHT (even when donning the lesbian uniforms THEY made up, designed to eschew femininity-as if). They walk STRAIGHT. They talk STRAIGHT. They write STRAIGHT. So pairing up with another female is incidental to being read/understood by the overwhelmingly dominant Heterosexual world. By being read/understood Het by Hets, STRAIGHTBIANS were/are able to undermine Lesbian at every level, except the most important one, actually/biologically BEING a Lesbian. But regardless, STRAIGHTBIANS communicating with their STRAIGHT brains can communicate/be heard and listened to in ways Lesbians will never stand a chance, they also command numbers that Lesbians cannot compete with.

Lesbian communication is read by STRAIGHTBIANS as weird, strange, or as men. It has long been thought Hets, including STRAIGHTBIANS who called Lesbians men/mannish had to do with how we look, the internet has shown even with no picture present, Lesbians are read/reacted to as men, particularly by Het women. Many of whom myself, Mrs Dirt and others are honestly believed to be men by many STRAIGHTBIANS. We're told things like women dont talk like that, lesbians dont act that way etc. No, WOMEN i.e. Heterosexual females dont talk the way WE (Lesbians) do talk that way! And "lesbians" i.e. STRAIGHTBIANS do not talk the way we talk because they are STRAIGHT!

We Lesbians are accused on social media as being too crass, too brass, too brazen, too direct, too aggressive. We are accused of being abusive, of leveling coordinated attacks (at the same time being written off by STRAIGHTBIANS because we are only a tiny cult of a few people-which is it ladies-there are a shit ton of us or there are a handful???). STRAIGHTBIANS are warning other STRAIGHTBIANS,  (whom they believe to be young lesbians) that we Lesbians are a danger, a scary threat that might influence lesbian STRAIGHTBIAN youth with insane ideas about nature, biology and science!

Across multi global social media platforms, fearful STRAIGHTBIANS are squawking about our blog posts, our Facebook pages, our Tweets, including squawking to social media authorities. Het authorities who believe STRAIGHTBIAN stresses, concerns and flat out lies. Believed, because THEY are understood! Believed, because no matter how THEY ID, they effectively communicate and are read as S T R A G H T! And because Homosexuals, particularly Lesbians, remain the most despised, disdained and HATED humans the HETEROSEXUAL world has ever seen, Lesbians dont just get a raw deal. Lesbians get a slaughter housed blood bath with full blown disembowelment thrown in for shits and giggles!

Case in point, earlier this month during this particular shit show, (which I'm told is still going strong across many different social media areas) because personal photo's of Mrs Dirt and I were being used to slander us (obviously Truth will always get you shit talked and having always spoke Truth I'm well used to it-but you can shit talk without using OUR photos) I requested to Hetcentric Twitter authorities that OUR personal photos, taken by ME, be removed from this Twitter STRAIGHTBIAN's Tweet.

Twitter authorities sent this email to me in response to my request: 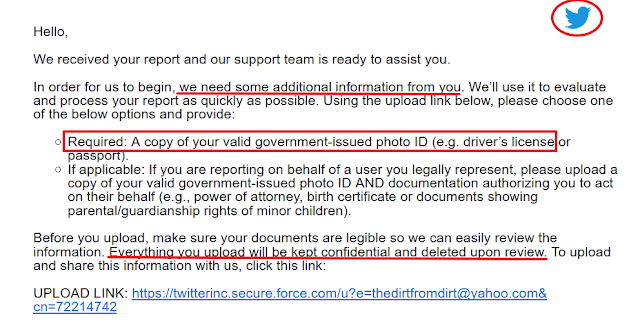 Given that I dont know who the fuck was going to see or be able to see my drivers license info or had any verifiable proof Twitter would delete my info once done with it, I was apprehensive about supplying it. BUT I conceded and supplied LEGAL/physical proof the pictures in question were of me/taken by me. What was Twitter's response back?

Some years back, a plan to murder me (involving two trans females who joined forces) was brought to my attention and fortunately thwarted. Since then I am obviously VERY cautious about who has knowledge of my whereabouts. Despite several moves since then I have yet to fill out a change of address through the post office in effort to limit knowledge of where we live. And since then any/all persons who are either a direct threat or I find know where we live, ALL names are given to local authorities in the event harms comes to me/us. And given the work Mrs Dirt has done with missing persons for more than a decade, including assisting in bringing several murderers to justice-Mrs Dirt has had an equal amount of threats/death threats-one threat took a picture of her then dog in her then backyard. All this to say, WE HAVE A SERIOUS NEED TO KNOW WHO HAD ACCESS TO WHERE WE LIVE! What did Twitter say? 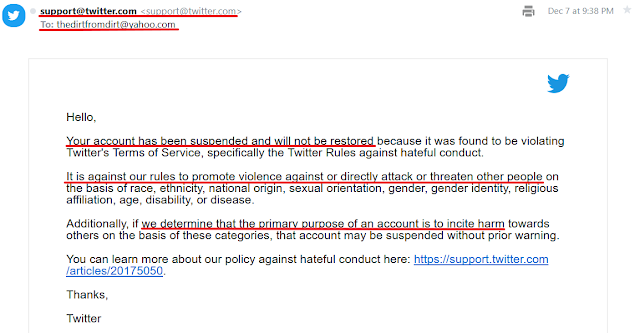 My account clearly wasnt/isnt suspended, not even timed out. I took this response to be a BIG WATCH YOUR ASS BITCH CUZ WE DONT TAKE KINDLY TO DYKES LIKE YOU!

Just this week another Lesbian's account was actually timed out for merely Tweeting this: 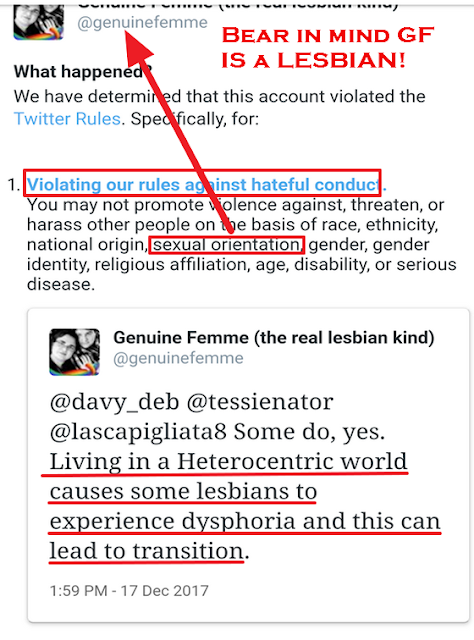 Lesbians literally are NOT allowed to write/discuss/talk about (except in strict privacy with other Lesbians) what it means to be a Lesbian. Doing so doesnt merely violate Twitter/Social Media rules, it VIOLATES Heterosexuality period! When STRAIGHTBIANS declare we Lesbians are men/are acting like men, what they are really saying is Lesbians VIOLATE Women-i.e. Heterosexual females whom the term Woman is SOLELY based. (Note-meaning an admonition to THEIR Heterosexuality as well) It is no coincidence that Lesbians discussing our Lesbian biology and the experiences we have that spring from our biology are being called RAPE/RAPISH!!!

Explain to me will ya, how does sharing the life experiences Lesbians have as Lesbians equate to a man forcibly shoving his penis into a female's orifice against her will?

Being a Lesbian isnt an affront to Woman anymore than we're an affront to Heterosexuality, Lesbian simply isnt either of those things. You may find that offensive, frankly I/we dont give a fuck. Lesbian biology WILL continue-for now. And for now I may be banned (wouldnt be the first time) from every Social Media platform in the world, my (our) LESBIAN biology WILL persist. You wanna get rid of me, you will have to kill me. And next time, dont bring a friend, you best bring a fucking army!