As a follow up to our previous post entitled Assorted Straightbian Subtypes: AKA the Seven ASSes, we wanted to follow up with 2 other subtypes of Straightbian, both of whom may likely have significant overlap with some of the previously described 7 subtypes.

Additionally, although this should go without saying, obviously it needs to be said anyway, based on comments we have received:

Of course, some just-plain-straight females (not Straightbian posers claiming to be Lesbian, but straight-up heterosexual females) may share characteristics that fall into one or more of these archetypes. That makes sense, since both just-plain-straight females and Straightbians share a VERY important characteristic: THEY ARE STRAIGHT, but always remember: we are never going to be talking about straight women unless they are impacting upon Lesbians in some way.

So, before you comment, "I know a straight female who likes Tarot", please stop and remember that unless she is a STRAIGHTBIAN, we are not talking about her, nor denying her existence. She is simply irrelevant to this topic. 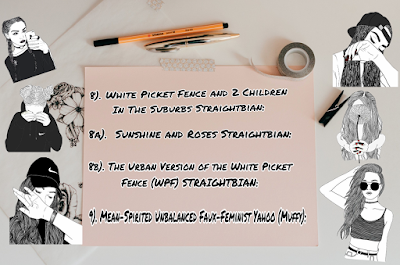 Without further ado, here are 2 follow-up ASSes to add to our previous Assorted STRAIGHTBIAN Subtypes:

This Straightbian will say that there is absolutely no difference between herself and her soccer-mom neighbor, except who she is in a relationship with- (and, actually, she is right about that...because they are BOTH STRAIGHT!).

"We're all the same", White Picket Fence loves to say, "Why label people?" Because "Love is Love", after all! "We're all human, why create all of these unnecessary divisions?", WPF thinks, shaking her head.

The White Picket Fence Straightbian loves this cup and carries it everywhere because, gosh darn it, we are all just HUMAN, now aren't we?: 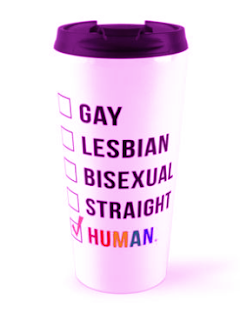 The White Picket Fence Straightbian cares very much about appearances and fitting in with society's expectations.

She is in a relationship with another female (either another White Picket Fence Straightbian or a Lesbian who can pass as Straight) but, by golly, she and her partner are going to FIT IN OR BUST:

On social media, she will call herself something like "just2mommies2kidsand1goldenretriever"; she will follow only others exactly like herself, "eschewing" any real Lesbians who point out that Lesbians are actually different than straight women. So darn divisive!  LOVE IS LOVE, after all...
BUT she is not a Lesbian.

8a). Relatedly, a sub-sub (-sub...?) type of the White Picket Fence is the Sunshine and Roses Straightbian, who is an emotionally-fragile straight female who uses relentless, sugary-sweet positivity to completely escape/avoid dealing with her own issues that have led her to mistakenly believe she is a "Lesbian".

Sunshine and Roses was perhaps physically, emotionally, and/or sexually abused as a child; or at least had a chaotic, disturbing home life while growing up. She likely has had very bad previous experiences/relationships with past boyfriend(s)/husband(s).

Sunshine and Roses is desperate to escape not only those bad situations, but also all of the heavy emotional baggage that she carries from those situations.

In fact, she has stuffed that baggage down so far that she actually mistakenly thinks she has left it behind.

On social media and in real life, Sunshine and Roses "eschews" all negativity and strives to keep herself forever insulated from real-world unpleasantness. Her social media posts are likely predominantly inspirational memes and/or cutesy GIFs and/or dreamy "Peace, Love, and Harmony" sentiments, and/or heartbroken laments about "Why is there so much strife in the world?".

Sunshine and Roses may not even attempt to embark upon a relationship, preferring to call herself a "Lesbian" (or possibly "queer" or "LGBTQQIAAP+") without the pesky reality of dealing with another fallible and not-always-positive human being. She lives in a fantasy world, perhaps fantasizing incessantly about an idealized version of a particular singer, actor, book, movie, TV show, author, etc. She may read or even write happy-ending fan fiction to erase the unpleasant reality of how an actual storyline turned out.

Sunshine and Roses is likely to unfollow or block anyone on social media who she perceives to be "negative" or "crass" or "unpleasant" in any way. She surrounds herself with beautiful objects and frantically attempts to create harmony in a world sadly lacking it.

Sunshine and Roses is not a bad person. In fact, she is typically a good person who has been dealt a very bad hand in life. BUT she is not a Lesbian.

8b). The Urban Version of the White Picket Fence (WPF) STRAIGHTBIAN:

Like her suburban counterpart, the Urban WPF Straightbian just wants to fit in, but with a very different crowd.

The Urban WPF doesn't want the actual white picket fence of her suburban counterpart's dream...no, of course not, because that would be just too common for Urban.

No, the Urban Straightbian wants something more edgy, more "in":

BUT she is not a Lesbian.

Muffy often overlaps with many/all of our previous 7 Assorted Straightbian Subtypes. In fact, Muffy has likely has likely dabbled with playacting many of the subtypes at one point or another.

Muffy loves and uses social media with a vengeance. And "vengeance" is the key word here, because Muffy is one angry, hateful harpy. In fact, in her social media bios, she proudly claims to be a/an "angry, hairy Lesbian", "man-hater", "virago", "shrew", "Patriarchy-smasher", "radical Lesbian", "angry feminist", "Lesbian separatist", "woman-identified-woman" (or womyn or womon or wimmin or wimms...or any other ridiculous misspelling) and/or some similar descriptor.

On the surface, Muffy may seem to be the polar opposite of Sunshine and Roses, but these two subtypes share many common denominators; the difference between them is exposed in how their underlying issues are expressed in opposite ways. Instead of internalizing/repressing her anger/angst (as Sunshine and Roses does), Muffy externalizes her rage, spewing her hatred outward in an incessant vomitous torrent, reminiscent of the pea-soup scene from The Exorcist.

Muffy doesn't just wait for trouble to find her on social media; oh, no, not Muffy. She goes looking for trouble and when she doesn't find it, she creates it, usually by seeking out Trans males minding their own social media business. Muffy will dump a hefty shitpile on a Trans male's social media account, then when said Trans male reacts, Muffy will claim to all who are listening that SHE has been attacked! Muffy will  use these instances to convince her friends, but most importantly convince herself, that men are bad/men are angry/men are violent. Like the Transgenders she claims to hate, she too needs constant reinforcers to prove her own held warped notions of herself as Lesbian.

Like a trigger-happy bounty hunter, Muffy is always on the hunt for people she finds offensive, and when she inevitably finds someone who dares to say something she disagrees with, she tries to blow that person away with her high-caliber nastiness.

In her quest to destroy her perceived enemy/enemies, Muffy completely "eschews" all logic, listening skills, and literacy, opting instead for sheer unadulterated, completely illogical, meanness.

No insult is too low nor off-limits for Muffy. Muffy hits below the belt and is proud of it. Despite claiming to be a "feminist", Muffy regularly insults other females' looks, clothes, hair, makeup (or lack thereof), weight, age, marriage, choices, profession, ideas, words, work, etc., etc., etc. She calls Lesbians "men" without a single thought, nor care, in her venomous, vitriolic, vapid head about the potential effects of her words.

Muffy LOVES using inane memes/GIFs in the heat of battle, apparently not realizing that her memes/GIFs are as lame, illogical, nonsensical, and ineffectual as she herself is. She will then throw at least a few red herrings into the discussion, saying untrue things that make no sense whatsoever, and have nothing to do with the conversation at hand, but are intentionally designed to try to make the opponent(s) look bad and to distract from the fact that Muffy has no coherent argument. (Examples include falsely claiming that the perceived opponent(s) is/are: racist, sexist, misogynist, rape-apologist, perverted, pedophilic, etc.).

Finally, despite having deliberately sought out and started/continued the argument herself, and, despite having said absolutely false, defamatory, and despicable things to her opponent, Muffy then pretends to be the victim in the situation, falsely claiming that the other person is "bullying", or even "stalking", her. And Muffy is not above or below using a fake suicide attempt to garner sympathy and support, thereby completely nullifying any further arguments.

She will then enlist other Muffys to attack, berate, harass, block, defame, exclude, and/or report her perceived opponent(s), while basking in the shallow, brittle "sisterhood" and feel-good-for-a-minute attention afforded from being The Perpetual Victim Of The Patriarchy.
BUT she is not a Lesbian.

While some STRAIGHTBIANS are clearly more dangerous to Lesbians in the individual sense, even STRAIGHTBIANS who partner with each other are dangerous to Lesbian as an idea. STRAIGHTBIANS are collectively responsible for taking the flesh-and-blood Lesbian and turning us into nothing more than an IDEA which they, warped Het Woman, flesh out through their own individual pathologies! Pathologies the Psychiatric community, for centuries have documented, diagnosed and demonized. Pathologies accepted by Het society as truth/God's word. Heterosexual Pathologies widely and readily attributed to actual Lesbians, haunting our relationships with family, friends and strangers even, all with long held preconceived IDEAS forged by STRAIGHTBIANS!

But Lesbian isnt an IDEA, we are flesh, blood and bone.