In our ongoing Lesbian Quest to UnSTRAIGHTEN Lesbian from the monumental lies Het women/Radical Feminism has blanketed over Lesbian biology/Lesbian childhood/Lesbian experiences and Lesbian lives, we routinely encounter Het female oppositional hatred that patterns itself like clock work, regardless of the Het women involved. Just as Het women/Radical Feminism wove their harebrained Hetsplained notions of Lesbian over Lesbian biology in effort to smother Lesbian reality/preserving theirs, we can only slowly peel back the Het layers one at a time. All that to say, this is another layer removed, giving light to Lesbians where shadows have stood far too long. 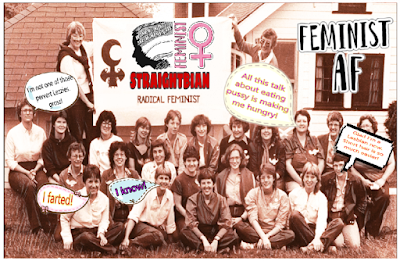 The examples used in this post are not to single out individual Lezbophobes, but to continue to highlight for Lesbian readers the patterns with which Het females erase/use/abuse Lesbians as humans and Lesbian as their personal/political commodity. As we have been documenting in our UnSTRAIGHTening Lesbian series; Het women (often under the cult of Radical Feminism) have defined/dominated all aspects of public discourse/dis/ease and ideas about what Lesbian means/is to the total exclusion of actual Lesbians!

What happens to Lesbians that refuse to swallow hollow Hetsplanations of Lesbian? We are usually first met we disbelief. A kinda did they just say Lesbian is biological? What? Huh? Followed quickly by rationalizing their warped Hetsplained notions of Lesbian by declaring Lesbians mad/crazy etc. For example: 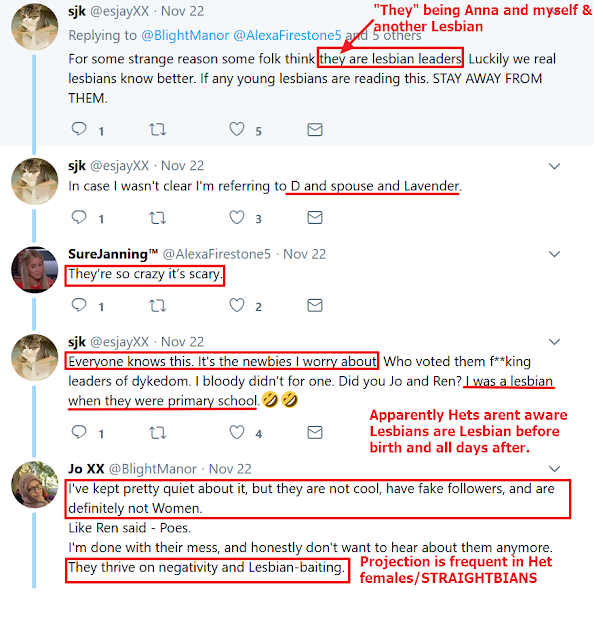 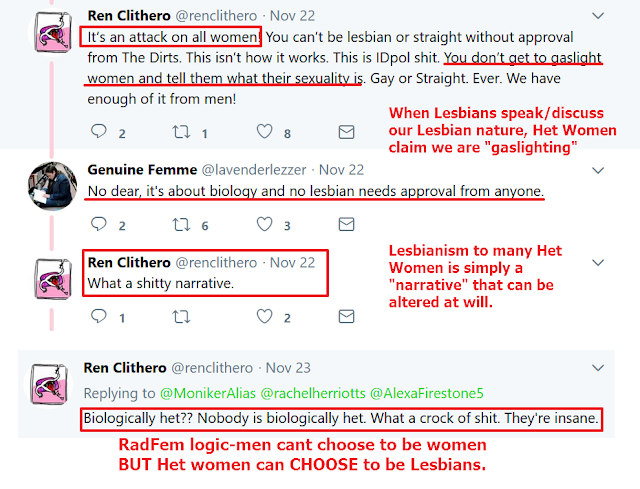 Lesbian biology is then Hetsplained as an attack on all women/scary/dangerous etc. Het women want to call themselves Lesbian without being associated with actual Lesbians. Actually Lesbians are treated/viewed the same as perverts and pedophiles:

This could be something STRAIGHT out of the DSM or Mary Daly:

When Lesbians talk about our own Lesbian childhoods we are often met with the sex obsessed sickness that is soooooooooo Heterosexual:

There is no excuse for this kind of sick perverted Het female logic; being a baby Lesbian, a toddler Lesbian or a baby Dyke have nothing whatsoever to do with "eating pussy", which by the way is the hallmark for Het females claiming Lesbian! Every Lesbian adult EVER has been a Lesbian infant/toddler/grade schooler and teen! Lesbian isnt something we magically achieve via sex with another Lesbian! That would be like saying unless Heterosexuals are engaging in sex, they are not Het. Pure fucking HETEROSEXUAL ignorance and perversion!

While Het women pretending to be Lesbians claim they are of sound mind, we're told, as actual Lesbians living normal Lesbian lives that we are perverts. Like Transgender minded individuals/groups, Radical Feminists individual/group think entitles (Het privilege) them to ignore nature in favour of choice; anti-essentialism is the hallmark of Radical Feminism and Transgenderism.

But the pesky reality of Lesbian biology unmasks Het Women's Lesbian delusions, about themselves and their victimfied imaginings of the big bad patriarchy who wont let them do anything! Lesbian is the wrench in their bullshit ideas of garbage like compulsive heterosexuality and social constructionism! 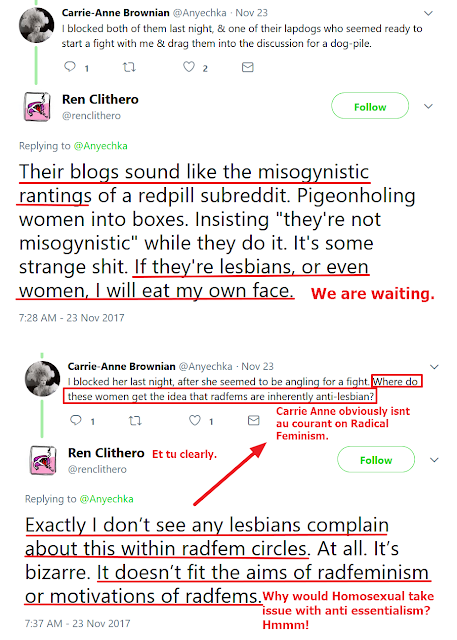 As Lesbians stand our biological ground, Het women usually then go for the proof beyond ANY and ALL proofs (in their Het minds) of what makes a Lesbian a Lesbian: Same sex SEX: 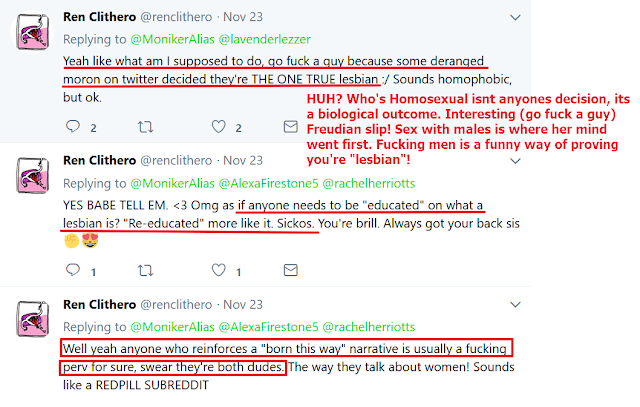 Obviously when you're actively deceiving yourself and those around you, and your identity is created on action instead of being, you have no foundation with which to stand. Therefore when challenged/confronted with biology/nature/logic by Lesbians, Het women will then go for the call-Lesbians-a-man card often mixed with illogical insults usually directed at our age or looks: (so feminists!) 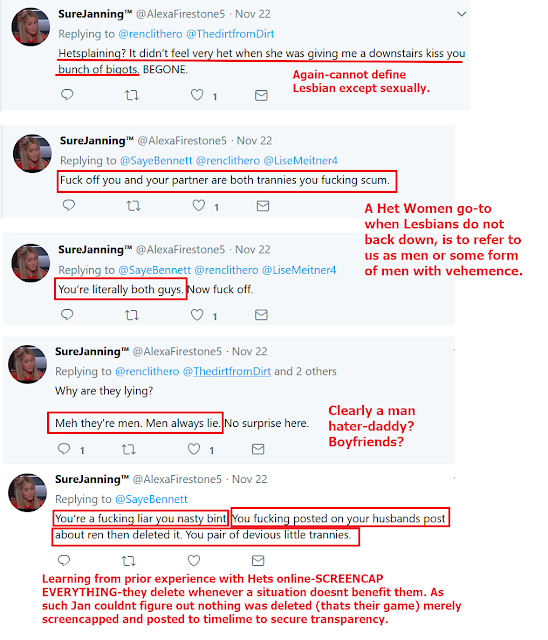 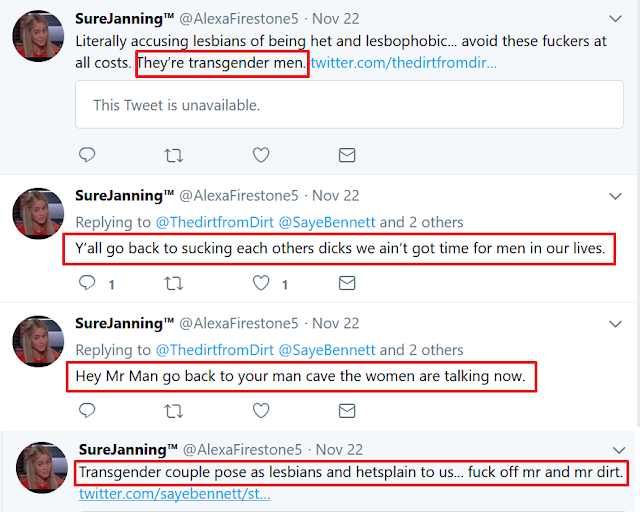 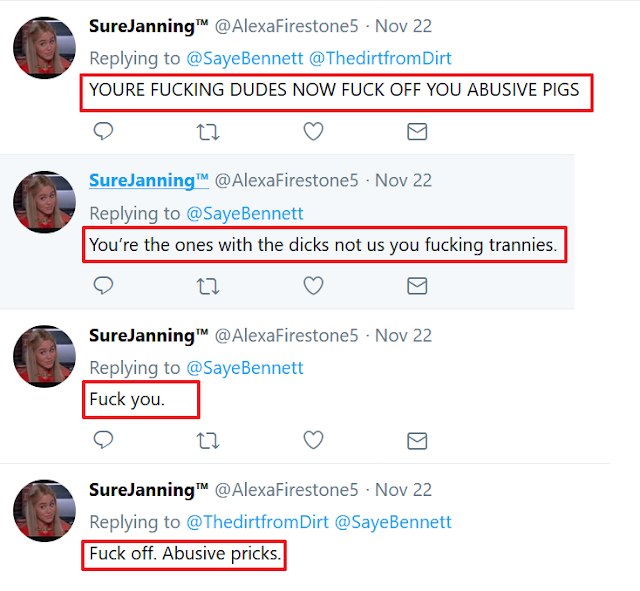 Lesbians, when confronted with Het women/RadFem Lesbian lies and ignorance, if you choose to engage/defend Lesbian biology/history watch out for these very common patterns described above. And if you're new "lesbian radfem" friend/follower shows ANY sign of Lesbian is a choice bullshit, she is NOT your friend or ANY friend of Lesbians! BEFUCKINGWARE!