First up in our next (ongoing) series of Unstraightening Lesbian is the recently departed Radical Feminist Kate Millett. Millett is best known for her sex obsessed (all her works are) much ado about nothing book Sexual Politics, published in 1970; a huge tenet, gospel and BIBLE of Radical Feminism past and present. Millet (she was married to a man for 20 years mind you) is equally known for her tenets on CHOOSING Lesbianism for the sake of sisterhood and the destruction of the family, but I digress. 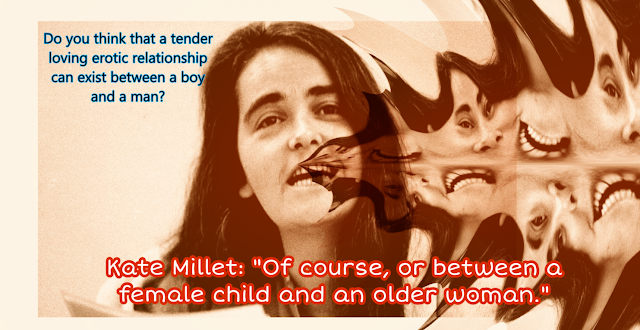 Sexual Politics was the brain child mental diarrhea of Het female excuses blamed for personal failures/unhappinesses in (Het) Women. In Sexual Politics Millett tried to detach biology from males and females by redirecting real and perceived Het female inequalities toward collective (Het) man-Patriarchy, using a warped version of Marxism lite.The gist going something like this-(Het) females are conditioned by males/male systems of power to act/function in ways approved of by males/male systems of power and there is little (Het) females can do about it. Therefore if some of the higher thinking (Het) females (like Millet) raise the consciousness of less conscious (Het) females, together they can challenge these male power systems and smash the Patriarchy! Female roles will be cast off and with the removal of socially conditioned roles, so to will fall the inequalities held in place by constructed sex differences; sexual construction being propped up and maintained by Patriarchy.

Millet went about dismantling biological sex differences among males/females by primarily utilizing (homophobic) Robert Stoller and (pro pedophile) John Money's THEORY that males and females are RAISED (brains are malleable) masculine/boys/men and feminine/girls/women, they are not BORN that way. So if the next generation of humans can be raised without the sex roles assigned to males/females, the next generation of females would be inclined to be more equal/equal to that of males. 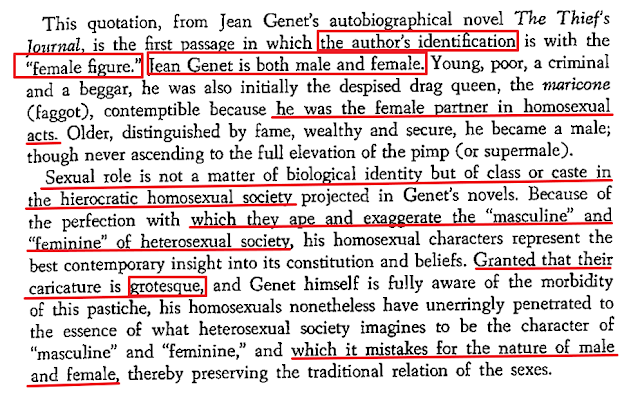 I didnt leave Millett's quote from Genet in as it served no purpose for her point, yet interestingly Millett quotes "female figure" where no such phrase exists in the Thief's Journal. Millett being fully ignorant of Gay male culture, filters Genet's/Genet's homo character's homosexual experiences through her own privileged heterocentric lens. Millett with Het privilege intact accuses Genet of grotesquely mimicking the very Heterosexual roles SHE herself despises! Millett cannot see/comprehend Homosexual Genet or his Homosexual characters outside of HER Heterosexual framework! That Sexual Politics was such a huge seller isnt at all surprising, Millett's Homophobia runs rampant in this book, a book published at a time when Gays and Lesbians were just beginning to make headlines and headway and if the world isnt ready for that today, imagine nearly 50 years ago.

Millett goes on to say that Homosexuality is a:


"Painstaking exegesis of the barbarian vassalage of the sexual orders, the power structure of ‘masculine’ and ‘feminine’ as revealed by a homosexual, criminal world that mimics with brutal frankness the bourgeois heterosexual society . . . . In this way, the explication of the homosexual code becomes a satire on the heterosexual one."

In a NUT shell, Millett is Homophobically saying that through Homosexuality's mock version of Heterosexual roles, Heterosexuals can better see where Heterosexuality shines and where it needs polishing.

Around the time of Sexual Politics, Kate Millett's sister visited Kate and her husband Fumio in New York and arrived to this: 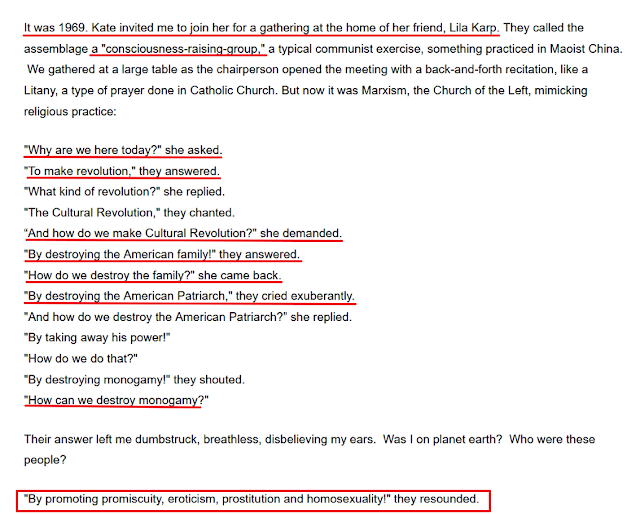 Homosexuality to Millett being a role like the masculine and feminine roles assigned to Heterosexuals via Patriarchy; by casting off the role of Heterosexuality Millett and other Feminists could simply put on Homosexuality:

As bizarre as it sounds and was, Kate Millett/Radical Feminists believed/preached (through a warped/flipped on its head act of sublimation) that by taking up Homosexuality (I know right!) they could destroy Patriarchy! In other words, rather than directly confronting the issues they had with males (singular/collective), in typical Het female form, they (and with Het privilege) redefined/used/abused and colonized Homosexuality (Lesbian), through which they could then fuel their collective anger (real or imagined) at men.

And obviously another upshot of gay liberation for Millett and her fuck friends, creating more fuck friends! Because marriage (heterosexuality) according to the married Millett was: 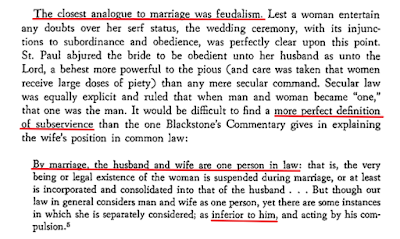 But when Kate Millett embarked on one of her many excursions into her Radical Feminist CONSTRUCTED lesbian relationships, Millett speaks of her female partner not unlike how Radical Feminists squall at men for doing: 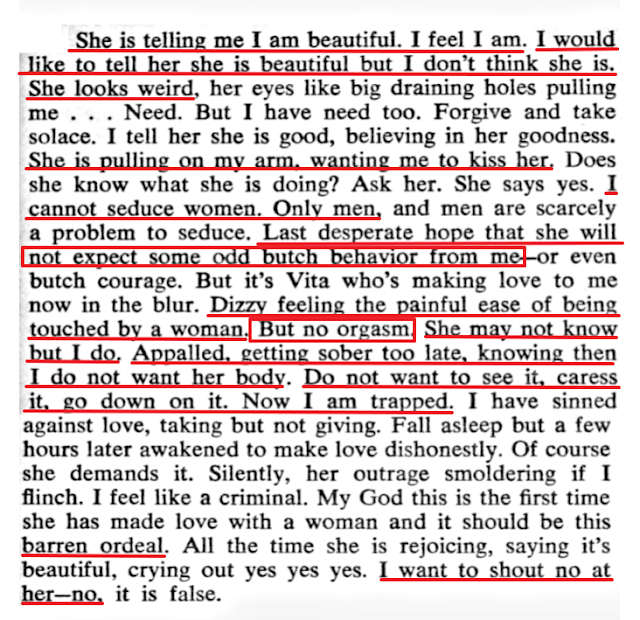 Millett also wanted to shout NO when at a conference at Columbia University she was publicly confronted head on about whether or not she was a Lesbian: 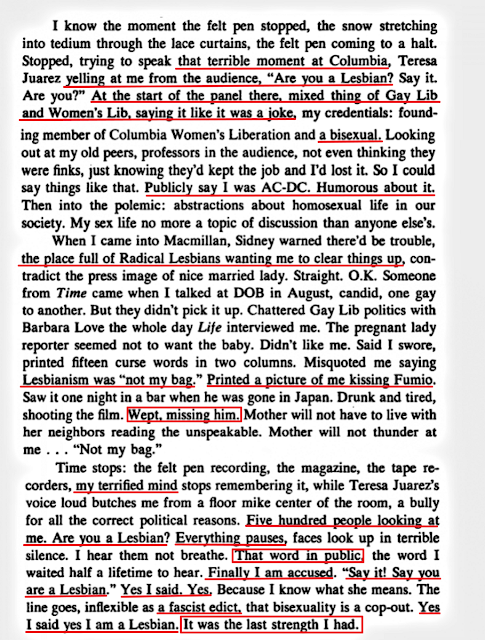 Private lezziefied fun fuckfests for Millett was one thing, but publicly calling herself a Lesbian was unspeakable (without pressure) and shameful: 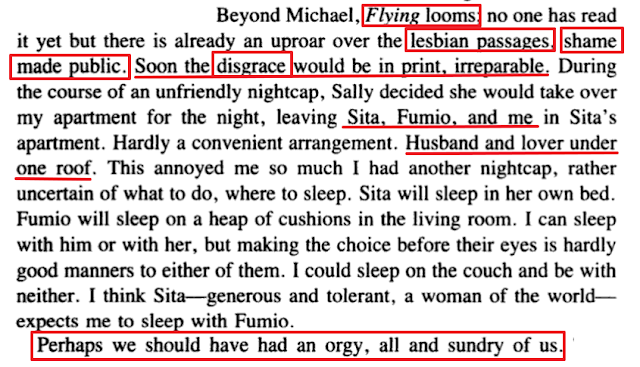 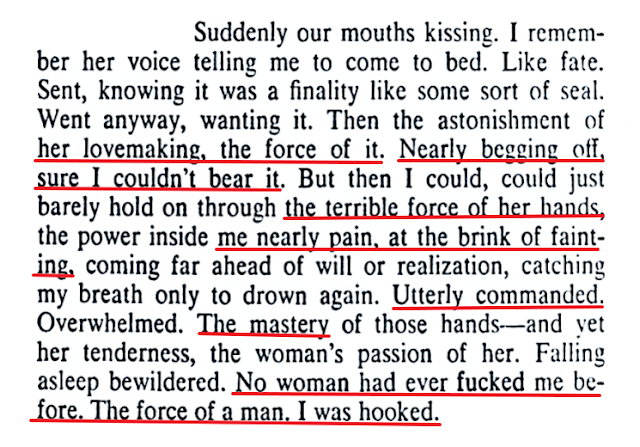 Millett admits she was not sexually fulfilled until/unless a Woman dominated her/her pussy in the same way as did a man. But Millett's sexual relationship with the older, multiple times married with children Sita didnt last beyond the sex. Millett's selfish disdain and jealousy for Sita's children and her occasional male lovers ended their affair and Sita's life through suicide.

Between juggling Radical Feminist conscious raising brainwashing sessions, her husband, multiple (Het) Women, teaching and a multitude of mental breakdowns/forced incarcerations, Millett bought a farm she hoped to make into a Radical Feminist utopia. She also carried on with yet another affair with another (Het) Woman (Sophie Keir), whom she purportedly recently married despite saying this about both Sophie and same sex marriage: 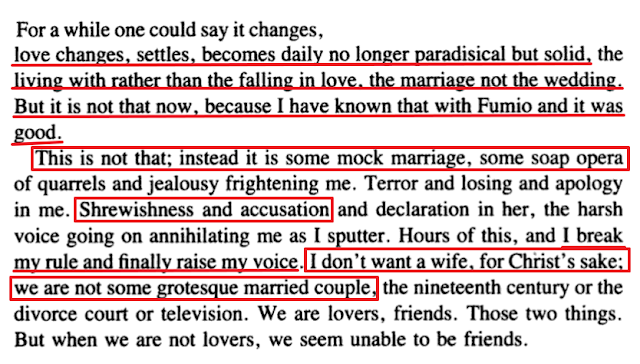 The RadFem all female farm life also proved a bit much for Kate Millett: 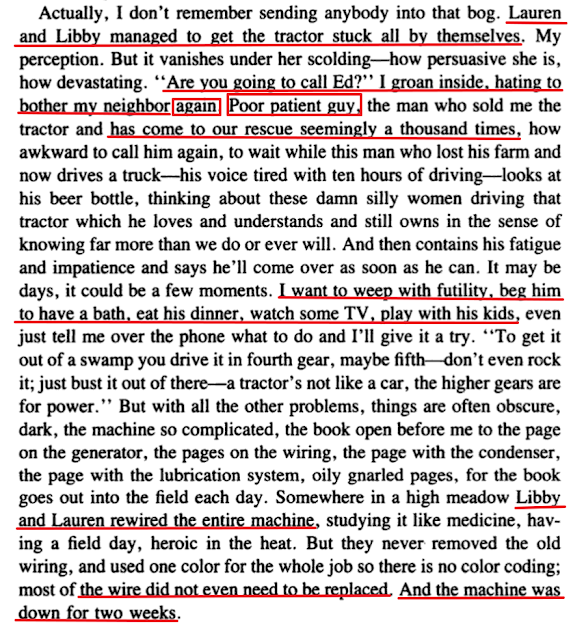 Kate Millett was clearly NOT a good person, NOT a Lesbian, NOT Radical, NOT Feminist and frankly NOT all there! Millett shows in her earliest writings a deep connection with SEXologist/pedophile and all around pervert John Money, and regardless of my personal anger at Kate Millett for co-opting Lesbian for her own selfish/sick reasons, what I find most fucking abhorrent about Kate Millett is her promoting PEDOPHILIA! Or rather FEMALE PEDOPHILIA:

Millett's biggest beef with adult/child sex (after removing exploitation) was legal/moral legislation has always been directed at man/boy and not at all toward grown Het Women having sex with little girls!

Mental illness threads itself through Radical Feminism creating a most ugly warped and demented tapestry. And Kate Millet's morally bankrupt needle pierced more than just the hearts of Lesbian, by publicly advocating sex with children Millett and ANY and ALL proponents of Kate Millett severed the very head of Humanity!