"God knows there’s already enough homophobia in the world. You don’t want to be adding to it." 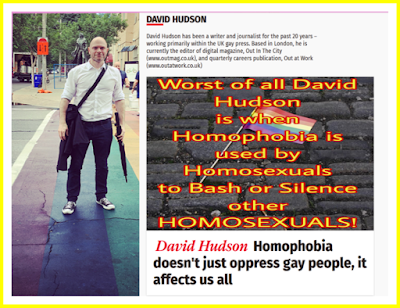 Mary Beard, who flatly stated Homosexuality is NOT biological, (meaning it can only be a whim/choice/something fun to do when you're bored on a Friday night and you havent a date) had been taken up by Gay Star News's own David Hudson in FAVOUR of Mary Beard's HOMOPHOBIC position, the first thing I said was "if a gay or lesbian wrote the article they've got some serious fucking internalized homophobia"! The quote/link that begins this post is from the same David Hudson of Gay Star News, regarding an article he wrote only last year on....wait for it.....wait for it....wait for it....HIS OWN INTERNALIZED HOMOPHOBIA! BINGO!

David began his article on Internalized Homophobia with the question "At what age does one’s internalized homophobia fade away?" and answers himself by saying:

Clearly THIS morning David Hudson of the Gay Star News has NO problem being a totally fucking HOMOPHOBE! Or maybe being a HOMOPHOBIC dick to Lesbians doesnt count? Hmmm....David continues:


"if someone invented a pill to wipe away internalized homophobia, I’d be the first in line for a prescription.
Why is that internalized anxiety still there? Maybe because homophobia is still there. And because we can still perhaps never predict how someone might react to finding out the fact that one is gay. Because we place undue importance on their opinion of us, we want to control how they find out’ disclosing when we think it’s safe."

Well David, clearly your HOMOPHOBIA is still firmly intact and clearly you still place MORE IMPORTANCE on the opinions of a HOMOPHOBIC History instructor than actual living and breathing Lesbians! That David, makes you a HOMOPHOBE! That not a single Lesbian was contacted by you for our say, that we were quoted out of context, that Miss Mary was quoted to suit hers/your HOMOPHOBIC bent, makes you a shit writer!

So legally is Mary Beard the one to be held libelous for slanting YOUR articles readership to believe I (a 50 year Lesbian) called a slightly older Women, OLD?

Are you David Hudson of the Gay Star News to be held libelous for slanting YOUR articles readership to believe I (a 50 year Lesbian) called a slightly older Women, OLD?

And as of today David Hudson of the Gay Star News, you just added to the over flowing Homophobia Gays and Lesbians are still fucking daily drowning in. Feel better about yourself?

Edit to add:
This is my Mrs Dirt's personal message to Gay Star News:


I wanted to tell you that David Hudson's story about Mary Beard is biased, unfair, unbalanced, and completely wrong. He never even researched the history of the Twitter wars involved in this situation; he never contacted ANY of the lesbians who disagreed with Mary Beard; he never presented our side of the issue; he quoted tweets that were defamatory to us; and he implied that we (lesbians) said Mary Beard was old which is completely untrue. If he was going to do a story, the only fair and balanced way would be to present BOTH sides of that story which he did not. Also, how reprehensible to take the side AGAINST lesbians. Shame on him for writing it and shame on you for publishing it. Stories like that reveal the utter lack of ethics in reporting now, and also, sadly, the lack of solidarity between gay men and lesbians. Thank you for listening. This whole debacle has been incredibly stressful, and the LAST thing lesbians needed was to be attacked AND misrepresented by a member of our own "community".

We have yet to hear back from them. I encourage Lesbians (and Gay men) to write to Gay Star News about their Homophobic content. If Gay Star News, like Mary Beard believe Homosexuality doesnt exist, then they shouldnt be calling themselves "gay" star news. Write to them here: feedback@gaystarnews.com