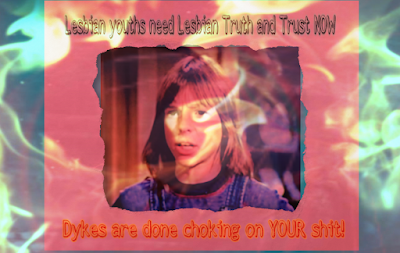 (Het) Women have historically used Lesbians themselves or Lesbian as an idea for their own selfish (Het) privileged reasons. Reasons ALWAYS having something to do with Men! For example: escaping men, turning men on, hating men, bemoaning men, making men jealous, seeking equal rights, even shaming Lesbians for acting like men or not being man enough! All leaving Lesbians DANGEROUSLY Hetsplained to society at large and worse, to each other!

The "lesbian" we desperately sought when young/afraid and starving for from books/films or tv didnt walk/talk or resemble anything we knew ourselves to be. That "lesbian" didnt seem all that different from the (Het) Women we already knew from family/friends/society except she dated similar Women instead of Men. It was as if the ONLY thing that defined her as "lesbian" was dating Women! We knew before we could speak a proper sentence that we were different from Girls, different/alien/alienated. And that difference at age 2 or 3 had NOTHING to do with fucking females!

So if the "lesbians" in our books and in our films and on our tv shows wasnt us, who were we? Who are we? This Hetsplained "lesbian" that (Het) Women perpetuate increased/increases the disconnect Lesbians feel, the incongruousness pushing Lesbians to transition and the confusion already surrounding Lesbian children in a Heterocentric world! Defining Lesbian in terms of nature (Biology) and not (nurture/lack there of-society) does not mean Lesbians hate (Het) females, but it does mean putting Lesbians first as Lesbians!

Lesbian children do NOT think/process like Girls, because we are NOT Heterosexual! Period! Our experiences ARE the experiences ONLY Lesbians can feel, can fully understand and fully appreciate as Lesbians! The Hetspalined/Hetcreated "lesbian" exists ONLY in the minds of Heterosexuals. Two (Het) Women may spend 50 years in a relationship (including sex), but EVERYTHING that exists between those two (Het) Women remains Heterosexual.

If two White people for whatever reason claimed to be Black and were in a relationship, we wouldnt use their relationship/relationship experiences for a Black relationship guide! Nor would we find it offensive for Blacks/Black couples to define their culture/experiences as different from that of the faux Black couple. In fact the Whites trying to usurp Black culture would be given hell and should be! But Lesbians insisting on our BIOLOGICAL/cultural differences from (Het) Women, and the most hateful/abusive/ignominious and Lezbophobic shit is slung at Lesbians by (Het) Women!

We routinely see (Het) Women/Feminists (rightfully so) get pissed off/outraged when there is a headline saying something like "Woman rapes and murders wife" and the woman is in fact a Trans Male! (Het) Women/RadFems/Feminists are upset and these inaccuracies/lies have only been a part of the most recent times. Lesbians are dealing with T H O U S A N D S of fucking years of Hetsplanations! And Hetsplanations thanks to Radical Feminism/Feminism that for the last two and a half decades have displaced biology/unsexed sex and pressured Lesbians into Heterocentric/Heterosocio transition at the very expense of Lesbian lives!

These same (Het) Women freely call us gender non conforming or gender in-congruent because Dykes fail to meet Heterocentric standards of male/female, not because those things are true! LESBIAN IS ITS OWN NORMAL! A Normal that doesnt mimic Heterosexuals (dont fucking flatter yourselves!)!! Lesbians are BIOLOGICALLY created and LESBIANS do function/process information according to our Lesbian brains. Heterosexuals may not like it, Heterosexuals may not believe it but Homosexuals do not fucking care! The Heterosexual world hates us, we know this! What Heterosexuals hate is Lesbians (in this case) holding up a fucking mirror so (Het) Women are forced to take a good long look at their Dyke hatred! We also need young Dykes to know Hets in only VERY tiny instances are truly in our corner. Waving a fucking rainbow flag which no longer holds any Homosexual meaning doesnt ensure solidarity with Dykes.

Flesh, bone and blood Lesbians are done with the Hetsplained self serving R A P E of our name, our lives, our love and our culture! Our Lesbian youths need Lesbian Truth and Trust NOW more than ever and the Hetsplained academicy feministy queery inclusive bullshit can be shoveled down your own throats, Dykes are done choking on YOUR shit!