A Lesbian Film with an Actual Lesbian Character! 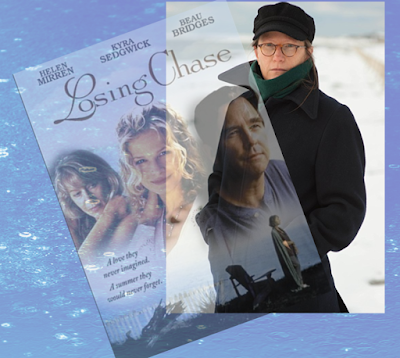 Recently Mrs Dirt and I were discussing the serious lack of Lesbian films there are as well as the lack of REAL Lesbian characters in films that claim to be Lesbian. I mentioned the film Losing Chase as an interesting film featuring a real Lesbian character (played by Helen Mirren) which Mrs Dirt had never seen.

After watching the film from an online link, (I hadnt seen the film since it came out in the 90's myself), I looked up the film's writer (KNOWING only a Dyke could have written it), and BINGO, I was correct! A Lesbian (Anne Meredith) DID write Losing Chase! In seeking information about Anne Meredith I came across this VERY interesting article/interview that unknowingly speaks volumes about Lesbian biology/thought process.

Anne Meredith had this to say about her Lesbian childhood:


"I had so many possibilities. The only thing that got in my way was the fact that I was a girl. But I was so hard-headed that I didn't realize that was a liability, so it didn't become one.
"But if I had chosen to be a professional athlete -- if I had been able to play Little League, I probably would have wanted to be a baseball player. But I wasn't allowed to play.
"I painted, and played music, and was a ski racer, and played tennis on the junior circuit -- there were so many things I loved doing, and was good at doing. It wasn't problematic for me, but I think my parents thought it was.
"I felt like Superman, which is probably what has allowed me to be here with such a happy heart, because Hollywood can bruise sensitive people quickly. It's not that I'm not sensitive; I'm incredibly sensitive, but I feel like I'm able to leap tall buildings and come down on the other side and land on my feet somehow."

Like nearly all Dykes, she was blind to Heterosexual roles (for females) because she wasnt a Heterosexual! Allowing her to excel in areas normally occupied for males. Given this interview took place while Anne was still in her 20's, she not surprisingly assumes Het females didnt grow likewise because they werent taught to:


That's one thing where girls really do themselves in. I blame their mothers for that. I think for the most part, their fathers are clueless about raising daughters.
"And there are studies about when girls get to school, that first grade girls are as good or better at science and math than boys are, and as time goes by, it reverses. And it's only because the teachers, and most of them happen to be women, are calling on the boys and excluding the girls.
"So I really hold women accountable for not empowering their own daughters, and for empowering their sons over their daughters. I speak to that a lot in my work as a writer. It makes me mad, because I've seen it around me so much."

Anne doesnt understand how she escaped these perceived messages (patriarchy?) told/taught to Girls. She even mentions how Girls can do well in certain school subjects but at around puberty Boys surpass them. Anne kinda gets the biology at work here, but not quite.


"But pretty much as a child, I felt genderless, and that's probably why. I was a tomboy, and I was able to beat up any boy who picked on my best friend or whatever, and I had a lot of power on the playground.
"It wasn't brute strength, and I wasn't bigger than they were, it was just determination, and I had a real strong sense of what's right and what's wrong, and how to behave and how not to behave.
"The gym teacher always picked me and another boy to select others for the kickball teams. That's a rotten position to be in, because you want to pick the teams that will win, but you don't want to exclude anyone.
"I always picked the kid with the glasses that were like ten inches thick, and the girl who couldn't run because she'd been in an accident when she was a kid, and like that.
"And if I heard any other kids mocking any of them, I just took off like a banshee and beat the crap out of them. I was constantly being sent home from school. But I was in the gifted kids program, too, and that was good."

This truly is almost a blueprint for the life of most Lesbian childen! We know we arent Girls and we know (we arent Boys) while we may have more in common with Boys than Girls, our sense of right and wrong trumps power, which usually lures Boys.


"I was never treated like a little girl, because I never behaved like a little girl, I always behaved like a boy. And it did serve me well. A lot of people were trying to force me into being a girl, it's not like everyone was very tolerant in the kind of town where I grew up. But somehow I was born this way, and so there's really nothing for me to do about it"..."I don't even identify myself as female, exactly. Or male."

Lesbian dont behave like Girls or Boys, because we're Lesbians! Unfortunately for Lesbian children we have no role models or Lesbian leaders with which to identify with, so like the young Anne, we compare ourselves to Boys. And while the Boy box may be less uncomfy than the Girl box, it isnt until we realize we're Lesbians we find as Lesbians we do not need or want a box. But the path Anne Meredith describes is a path most Dykes have traveled.


"I mean, I know I am a woman, and there's no doubt about it, but all of this stuff that society heaps on girls and women about what it means to be a woman -- I just never bought any of it, so I really don't know how to define myself or where I stand, except I know it's on the fringe. I'm happy there. Totally."
"I wouldn't be anywhere else. I'd kill myself. That's what 'Losing Chase' is about. It's about me imagining, at twenty, what would I be like if I were forty and I had made some stupid decision to marry some banker guy and live out on the Cape with him? Well, first of all, I'd have a nervous breakdown. Second, I'd be really bitter. I'd be incredibly cynical, I'd take it out on everyone around me. "It was so easy, I wrote that in like two days. It was stream of consciousness, and like a session with a therapist.

Again this is something nearly ALL Lesbians can identify with, that feeling of thinking how is it that I'm a Girl/Woman yet I do not at all function the way they do or are treated the way Girls/Women are? Not yet realizing we arent Girls/Women, but LESBIANS! I remember distinctly as a small child observing Women around me or on TV and thinking, I'll kill myself before I ever end up like them! And it is that precise fear of becoming a Het Woman that creates the Dysphoria Lesbians are so well acquainted with.

Anne ends the interview with this message to future Girls, but its clear from the message, she means Lesbian children:


"Like when they put the boot on your throat, just grab them by the ankle and kick them off. And then beat the crap out of them, dust yourself off and go about your business."

If you've never seen Losing Chase, it is without doubt one of the FEW films out there with a real relatable Lesbian character, even if Chase's choices werent ones we would have made. How Chase functions, IS Lesbian and thats something ALL Lesbians can relate to!