Funny gal Sue Perkins did a recent interview touching on her coming out experience. Sue P. actually wrote/performed a six episode comedy series (Heading Out) based loosely on her own difficult coming out experience. Given that Sue Perkins is about as smart as she is funny, as a Lesbian, its sad to see Sue P. ignorant or careless about Homosexuality, hers and in and of itself. 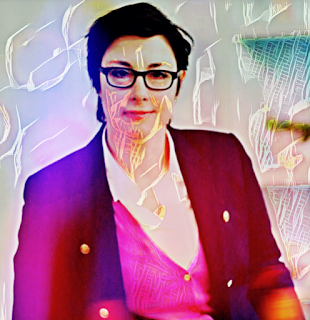 And in fact as a public Homosexual (you Sue!) linking Homosexuality with (in the minds and hearts of the general public and Psychiatry alike) debauchery aka Pansexuality, you in one fell swoop reinforced the long held notions/feelings that not only is Homosexuality a choice, BUT that Homosexuality is the sick fucking perversion Heterosexuals always and STILL believe it/us to be!

Sue leaves the topic of Homo/sexuality with this ditty "I don’t know but it doesn’t matter. I always thought it was a spectrum and I have been furious and dumbfounded I had to make a binary choice". It seems what you're furious about Sue Perkins, is that you were/are unable to make a choice because choice isnt an option! But were it an option, I can only think you Sue Perkins, would err on the side of Heteros.

Lastly Sue says of coming out-"Why should people have to go through this painful stressful archaic ritual of going home to their parents and telling them they are having sex". Well Sue, if reducing Homosexuality/Lesbian to nothing more than what two Lesbians (or two Females of any sexual orientation) do in bed, then you have more fucking problems than your own self hatred!

Also read Mrs Dirt's “Sexuality is Fluid”: The Great Big Hoax as a companion piece to this post.