Being an online public sorta (dare I say controversial) figurehead, in running/maintaining a long standing blog, I am exposed to a good deal of people/people types. In the STRAIGHTBIAN series/posts that both Mrs Dirt and I have written/collaborated, there is a type we (despite both of us having met online/realtime a good many in our respective lives) have neglected to mention/describe-The Maudes. Maudes are Women (always heterosexual) who frolicked in the fields of early 70's Women's Lib/Radical (lesbian) Feminism. These bra burning RadFems believed they were changing the world for Women everywhere by squatting over hand mirrors together as they searched for extraterrestrial life....errr I mean their cervix. 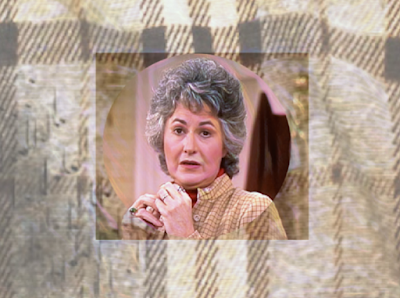 We call them Maudes because of their close resemblance (physically/temperament and personality) to the 70's TV character Maude Findlay. The lyrics to the Maude theme song adequately describe The Maudes as well it does Maude herself:

The song uses strong historical Female archetypes who in some way trail blazed for future Women, and then there's Maude! The Maudes however are not Joan of Arc's or Isadora Dunkin's, they were once over the top passionate about Women voting/Women construction workers, Women's conscious raising groups, Women's Grass roots, Women's music, Women's land, Women CEO's or Women Presidents, but born with Hetero Female biology, their passion exceeded their limits. The lesbian separatist utopia they so dreamed, never materialized beyond flimsy plans, loads of back patting/emotional reassurances, eschewing femininity by employing poor grooming habits, short hair and plenty O flannel shirts (in other words an insulting Heterosexual version of Dyke).

Maudes are always middle or upper middle class, usually college educated and often live within some ivory tower or other, if not professing Radical Feminist ignorance to unsuspecting college youths, they will work as a college librarian or college clerk. Their Hetero/sexuality is usually tangled with either early sexual abuses or disinterest/discomfort with perceived male dominance (sexual or otherwise), meaning they want to run-the-fuck/relationship yet fear doing so in male/female relationships. They believe they want some egalitarian relationship which Radical Feminism ensures can ONLY happen between Women-ie in order to have equality in their personal life they must CHOOSE to be a Lesbian. So along with eschewing their femininity, they also eschewed all common sense, thereby eschewing their own selves.

Most Maudes today are more passion-less, often bitter and thoroughly disappointed in where their youthful exuberance has went.  And worse, angry because where Women's Lib did open some doors for future Women, young Women today use their equality more to sport shorter skirts and higher high heels and fuck on the first date, than they do to advance their careers or pay tribute to The Maudes (who sacrificed so much!), that is IF they even know of any worth paying tribute to. The invisibility young Maudes claimed to have once so desperately craved (fuck the male gaze), are now dourer because they have it.

Most Maudes chose to be childless (that'll teach patriarchy!), so now starring old age in the face (many today are in their early to mid 60's), they are bitter, sad and afraid. The world they thought they were going to change via Radical Feminism, changed while they stood still. And if they hadnt with hetero privilege intact co-opted Lesbian, I might even feel sorry for them, might.