Less than Classy Classicist Mary Beard believes in Homer but not Homosexuals!

Story about Mary was well to tell
She seemed to scheme for a dream to sell... 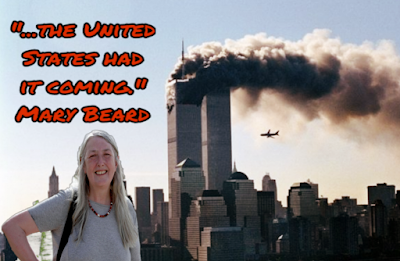 In the ongoing work Mrs Dirt, myself and now-other fed up Lesbians are doing to unSTRAIGHTen Lesbian from the historical/present clutches of STRAIGHTBIANS/RadFems/Feminists, the amount of anger/hatred/dismissiveness and outright Homophobia we have/are receiving is staggering. One of the most recent attacks on Lesbian came in what at first seemed a VERY unlikely place-teacher/writer Mary Beard by way of her Twitter account. I say unlikely because what I knew of Mary Beard had to do with her, some years back being viciously (with misogyny aforethought/aforeafter!) attacked on Twitter/social media over her age/looks. And that having been around the time (2013) I had just started using Twitter myself, I didnt read beyond headline tweets/headlines themselves. And given how terribly Mary B. was treated, I didnt think I had to.

But in light of some recent ugly personal exchanges, I took the time to find out EXACTLY why Mary B. was so hatefully attacked, not the classical song and dance Mary B. fiddled to her audience:


To be sure, ‘misogyny’ is one way of describing of what’s going on. (If you go on a television discussion programme and then receive a load of tweets comparing your genitalia to a variety of unpleasantly rotting vegetables, it’s hard to find a more apt word.) But if we want to understand – and do something about – the fact that women, even when they are not silenced, still have to pay a very high price for being heard, we have to recognise that it is a bit more complicated and that there’s a long back-story.

Yes indeed, there is a long back story, but it isnt to found in classical Greece or Rome, it occurred when Miss Mary was on the British TV show Question Time 2013.  On the program Miss Mary had THIS...


...to say regarding a specific British town whose resources have been drained do to mass eastern European immigration. A WOMAN (Rachel-I couldn't just sit there while she said there were no problems-Bull) from the town (Boston) who has seen/experienced first hand the many issues this overflow of immigrants has caused, despite not having a classical education or advanced academic degrees, bravely faced off with the flat dry fixed study Miss Mary raved about/from:

So as it turns out the angry attacks leveled at Mary Beard had less to do with something Odysseus and much more to do with something odious! Sexist/misogynistic comments obviously arent okay, but the emotions/feelings behind those remarks came from the downtrodden hearts of the working class toward someone (in this case Mary Beard) willfully representing the trite elite! Someone who instead of listening to the concerns of real living and breathing town folk, chose instead to make herself (in Het female fashion) a public victim/martyr, except the only steaks the town folk smelt were those sizzling on Mary's plate.

I say all this to lend clarity by removing the sordid shit stains Miss Mary purposely smeared blotting out our view and to show a pattern of behaviour both of her as a Het female and as an individual. 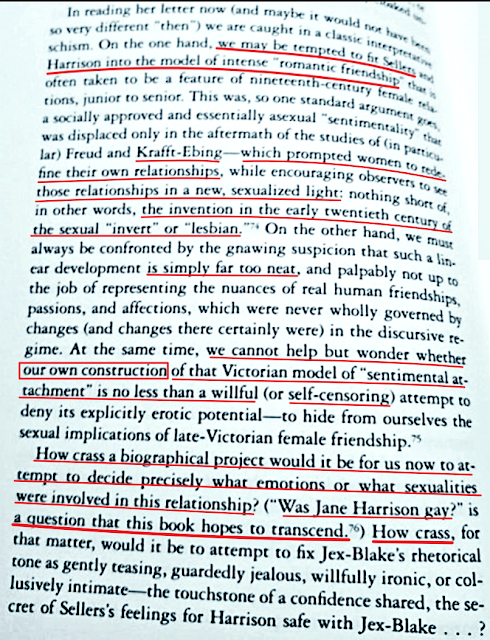 This passage makes clear Mary Beard's flippant Het privileged "own construction" of JEH's sexuality by dismissively likening JEH and other Dykes in her day (and us now) to simply jumping on the latest sex theories bandwagon. In this case Richard von Krafft-Ebing's early theory of inversion, later developed and popularized by Havelock Ellis (were "sexual inversion" actually an influence on JEH it would likely to have been via Ellis and not Krafft-Ebing). What is particularly insulting about this passage regarding inversion is, Mary Beard flatly suggests that had theories of Homosexuality not been made, then the relationships between Lesbians would not have been "prompted" to be LESBIAN (sexual) relationships! Basically, Beard did not/does not want to use historical evidences that would suggest JEH is guilty of being a Dyke. Mary Beard instead chose in her bio on JEH to "transcend" ignore the most core aspect of JEH-her brain.

Moving on to the Twitter shit storm instigated by the Homosexual denier/Homophobe Mary Beard, using thousands of her Het followers against a few lone Lesbians. There were a good many Homophobic comments from Miss Mary's followers, but I'm not writing about her friends/followers so for the purpose of brevity/clarity (remember that pattern of behaviour I spoke of) I'm focusing on Miss Mary and her anti-Lesbian remarks.

In this screencap you will see the first exchange between our Lesbian compat and Miss Mary: 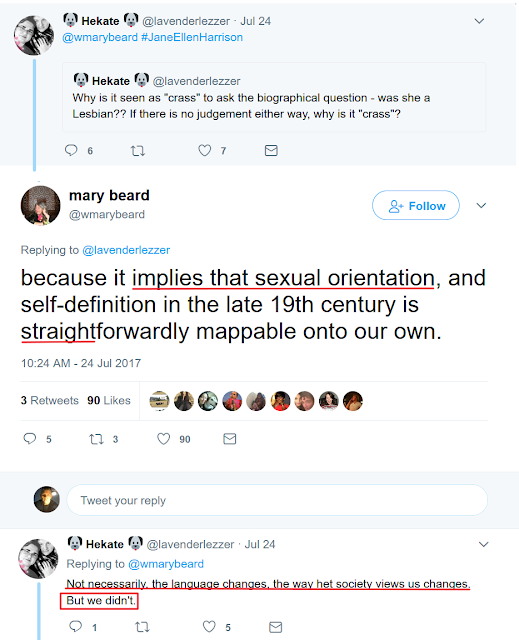 Miss Mary wrote it was crass to apply homosexuality to JEH, Hekate questions Miss Mary on if there is no judgement on being a Lesbian and there is sufficient evidence to suggest JEH was, why in the hell is it crass to call a Dyke a Dyke??? Moving on... 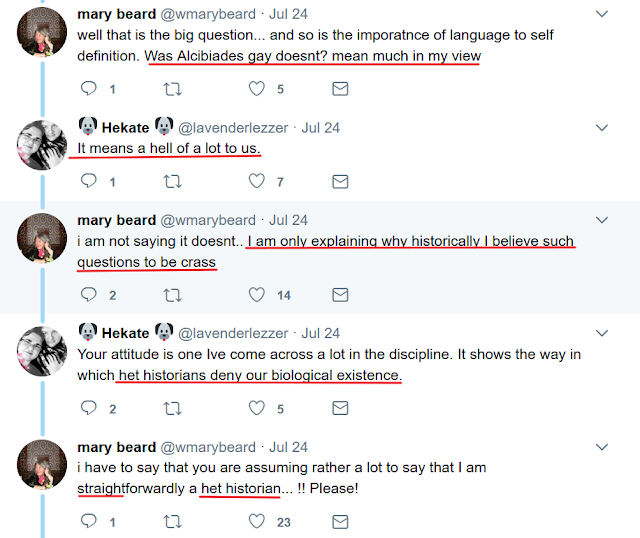 Miss Mary fully functioning in Het female form tries fruitlessly to toss in a straw wrench by suggesting she just might not be Heterosexual. (In my best faggy impersonation-Oh Mary!) Next!

Miss Mary who has written much about how Women/Women's voices are dismissed by Men, has no qualms whatsoever (with Het privilege securely in hand) about dismissing Lesbian voices/experiences/lives. 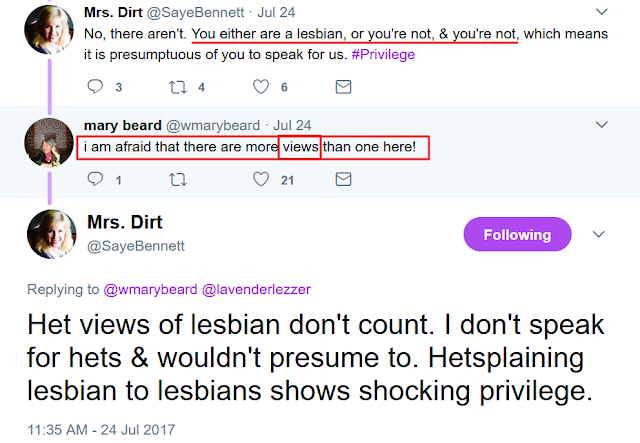 After being snowballed by Hetsplaining tom(or is it tam?)foolery, Mrs Dirt wasting her time (hours later) and effort trying to explain Hekate's/hers/mine and Lesbians past/present and future, Lesbian position, watched as her explanations fell on Het ears, did the adult thing and extricated herself by blocking Miss Mary. Clearly Miss Mary was peeved (no fun in poking Lesbians with a stick if they go home):

Dismissing Lesbian to that of just another concept 19th century men came up with, calling Lesbian biology "silly" and unloosing at worst/watching with popcorn in hand at best as her followers who FAR outnumber Dykes, to berate/Hetsplain Lesbian to LESBIANS isnt a "polite disagreement" and there was no "hope for interaction" under such Homophobic conditions! 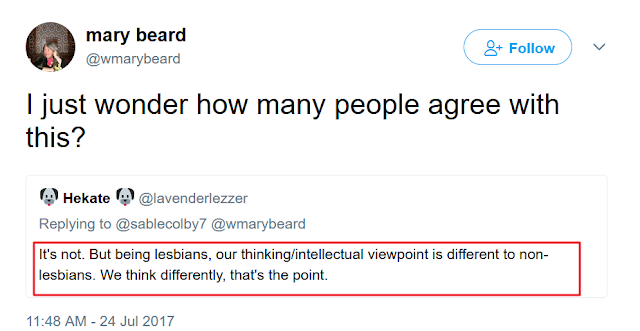 Bear in mind she was asking a shit ton of Heterosexuals...lol Mary, Mary 'Why ya buggin'?

Interestingly one of Miss Mary's followers more or less calls her out:

OH, its not Lezzies and Fags Miss Mary has a problem with, its our BIOLOGY! Gotcha!😉 And Miss Mary, the B stands for BEHAVIOUR, not to be confused (as you clearly are) with BIOLOGY! Let me break it down though so hopefully even a Het brained female can get it, BISEXUALS ARE HETEROSEXUALS. Maybe Miss Mary had her hand on a girl's leg once or she kissed a girl and she liked it, but whatever she did/didnt do/dreamed of doing has ZERO to do with having been born with a Homosexual brain. At this point a flustered Miss Mary admits she doesnt think Homosexuals exist beyond some fucked up behaviour:

Mary Beard believes in Homer but not Homosexuals! To every single Gay or Lesbian reading this, Mary Beard's above statement should send pause through every single thing she's written and/or taught. By declaring nature unnatural, Mary Beard isnt simply someone who has studied ancient times, she is someone still actively living there. (And as an aside, Miss Mary utilized a common Het female ploy by calling herself old which suggests her age was negatively brought up when not a single Lesbian brought age into it. All Lesbians involved are either middle aged or older-nice try Mary!) 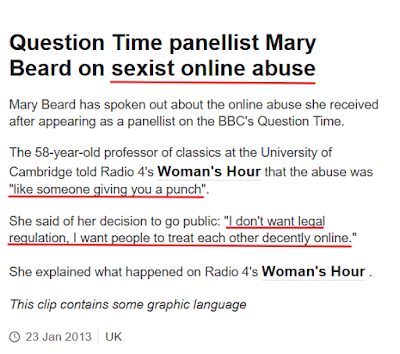 Miss Mary, decency whether online or off starts at home. I leave you with more words from Miss Mary:


Ironically the well-meaning solution often recommended when women are on the receiving end of this stuff turns out to bring about the very result the abusers want: namely, their silence. ‘Don’t call the abusers out. Don’t give them any attention; that’s what they want. Just keep mum,’ you’re told, which amounts to leaving the bullies in unchallenged occupation of the playground.